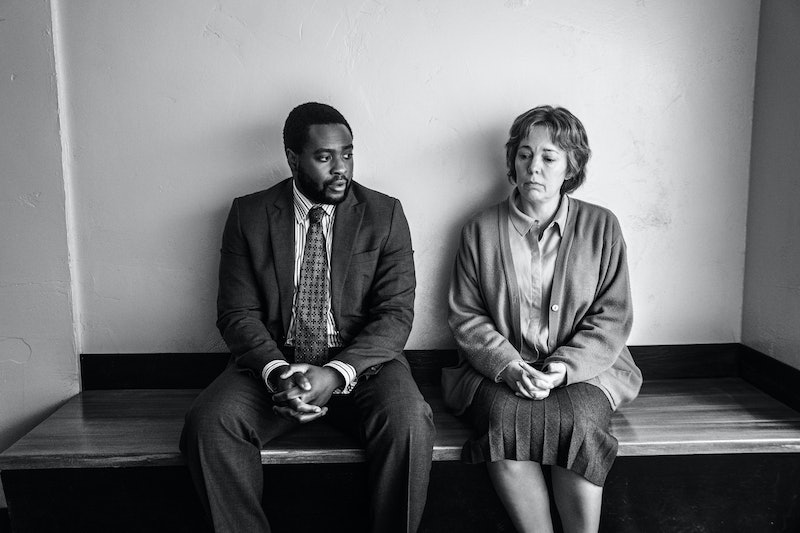 Olivia Colman and David Thewlis have won over true crime fans with their portrayal of convicted double murderers, Susan and Christopher Edwards, in the new SkyAtlantic and HBOMax mini-series, Landscapers. The series is based on the fascinating story of the murder of Susan’s parents (Patricia and William Wycherley) - and the subsequent 15 year cover up by the Edwards couple.

The four part drama, written by Colman’s husband Ed Sinclair, is not told in a traditional story-telling format. “We cannot wait to unearth for you the bizarre shape-shifting truths that lie buried in the unsettling yet deeply romantic world of Landscapers,” director William Sharpe told Sky.

Using bold visuals and disorienting story cuts (western cowboys are involved), the plot flits from the perspective of Susan and Christopher, to the police, and to the lawyers in an attempt to reflect the confusing nature of the case.

Speaking to Digital Spy about the harrowing case, Colman said: "To have protected themselves, in whatever way they did, for 15 years, that's not particularly fragile…

“That's extraordinary strength, actually, to wake up every morning, and go, 'God, this thing happened.' I think they both absolutely wish it had never happened. But it can't be undone."

In real life, the couple are able to keep up the pretence that Susan’s reclusive parents are alive through regularly corresponding to distant family members and filing important documents. They eventually turn themselves in when William is contacted for a visit for his 100th birthday.

The series tracks the couple’s confession, arrest, trial, and memories of the fateful May bank holiday 15 years prior. Just as in real life, Susan and Edward are found guilty of double murder and sentenced to 25 years in jail. One they are still currently serving.

Despite receiving good reviews, it is unlikely we will see a season two of the show. The narrative covers, in its own unique way, the conclusion to the Edwards couple's bizarre life of freedom. From their frivolous spending on Hollywood memorabilia to duping the police officer who lived next door to the Wycherleys for over a decade.

While Susan and Christopher maintain a story riddled with inconsistencies and lies, and the police piece together incoherent evidence, we will never know what truly took place the day the Wycherleys were murdered. But as Susan and Christopher ride off into the distance in the season finale, their reality remains far more bleak.

All four episodes of Landscapers are available to watch on NOW and Sky Atlantic in the UK.

More like this
Everything To Know About The 'Daisy Jones & The Six' TV Series
By Maxine Harrison and Brad Witter
This First Look At 'The Gold' Shows Jack Lowden In A Whole New Light
By El Hunt and Sam Ramsden
The Song At The End Of 'The Last Of Us' Ep 1 Has A Deeper Meaning
By Sophie McEvoy
A New Netflix Doc Will Explore The Unsolved Murder Of Jill Dando
By Sam Ramsden
Get The Very Best Of Bustle/UK
Sign up for Bustle UK's twice-weekly newsletter, featuring the latest must-watch TV, moving personal stories, and expert advice on the hottest viral buys.