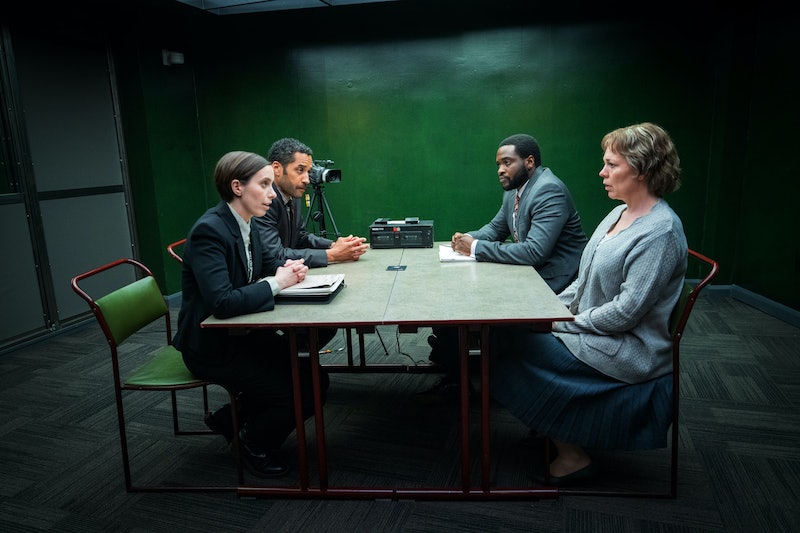 It’s October 2013. A tip off to police in Mansfield, Nottinghamshire, leads to the discovery of the remains of Patricia, 63, and William Wycherley, 85 buried in the back garden of their former home. What emerged about their fate shortly after is a harrowing tale of murder, manipulation, and misappropriation. They had been murdered by their daughter, Susan Edwards, and her husband, Christopher, and buried in their backyard. Their remains lay there, undiscovered, for 15 years.

The chilling tale is now the subject of a four-part Sky Atlantic and HBOMax mini-series, Landscapers, which stars Olivia Colman and David Thewlis. However, if you like your true-crime dramas serious and down to the wire, Landscapers may take a bit of getting used to. Directed by Will Sharpe (The Electrical Life of Louis Wain, Flowers and The Darkest Universe), the quirky dark comedy and thriller is described as “narratively playful” by Sky.

Landscapers tells the true story of the 1998 murders of Nottingham-residents William and Patricia Wycherley using extensive research and hours of interviews with “direct access to the accused, who have always protested their innocence of murder,” read the show notes. Written by Ed Sinclair – himself an actor as well as a writer and real-life husband of Olivia Colman – the series adapts the remarkable and somewhat completely bonkers true story in a four-episode limited series for the small screen.

“[As such], this is the story of a unique murder case involving four lives lived on the margins of society,” reads the official Sky press release, “that turns into an exhilarating and darkly funny exploration of love and fantasy: its power and its peril.”

Patricia and William Wycherley were shot dead at their home in Mansfield, Nottinghamshire, on the May Day bank holiday weekend in 1998. Susan and Christopher, who were later sentenced for the crime, embarked on an extraordinary journey of deception after taking the lives of Susan’s parents, keeping Patricia and William alive on paper through a series of letters to loved ones and forged document signatures for over 15 years.

Despite their daughter, Susan Edwards, emptying £40,000 from their account the day after their murder, and siphoning off a total of £245,000 of the Wycherleys’ money over the decade and a half, they had just one euro between them at the time of their arrests. “They didn’t lead a particularly lavish lifestyle,” DCI Griffin said of the “unusual couple”, per the BBC. “It would seem that the vast majority of their money was spent on memorabilia, on authenticated autographed items of people that they admired.”

The unusual story of Landscapers starring Olivia Colman and David Thewlis will be available to stream on HBOMax from Monday, Dec. 6 in the US, with episodes released each week. In the UK, Landscapers will premiere on Sky Atlantic and streaming service NowTV on Tuesday, Dec. 7 at 9pm, with all four episodes available to watch from the launch.