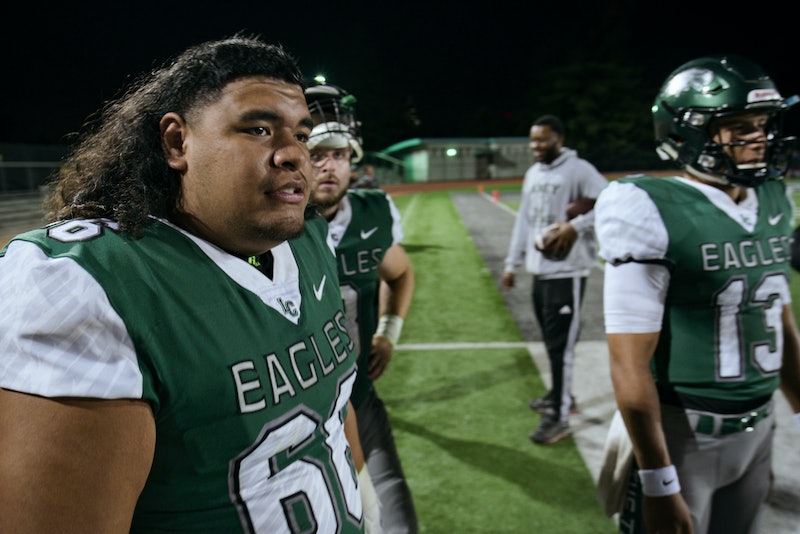 After five seasons, Netflix's football docuseries Last Chance U won't be returning with more episodes. Its newest season, which focuses on Laney College in Oakland, California, will also be its last. But according to Deadline, there's more Last Chance in the works: a spinoff called Last Chance U: Basketball following the East Los Angeles Community College basketball team is in development.

Per the outlet, the show is set to premiere in 2021 and will follow the ELAC Huskies during the 2019-2020 season. “We always wanted to give viewers a raw behind-the-scenes look at junior college athletics and we’re excited to expand the LCU legacy onto the court with JUCO basketball," said executive producer and director Greg Whiteley.

The first season of Last Chance U: Basketball will probably have a pretty dramatic arc, considering that (spoiler alert!) the Huskies' 2019-2020 season was canceled just before the championships due to the coronavirus pandemic. ELAC announced in June that basketball won't resume until January or February 2021 to avoid having the students play in the fall and early winter during the height of flu season. And even when the players get back on the court, there will be a 25% reduction in games played.

In addition to the basketball spinoff, Last Chance fans can also look forward to a scripted series based on the show. According to Entertainment Weekly, Courteney Cox will produce and star in the Spectrum series as a character inspired by athletic academic counselor Brittany Wagner, who fans got to know in the first two seasons of Last Chance U.

A premiere date hasn't been announced, but it will likely be 2021 or later. Deadline reported in January that the show had only just signed on its writers, so it's still in the early stages of production. Spectrum Originals chief Katherine Pope boasted to Deadline that it could be "one of the best roles" Cox has ever played. Clearly she's never seen Friends.

More like this
Love Is Blind’s Natalie Claims Shayne Signed Up For 'Perfect Match' While They Were “Still Together”
By Brad Witter
'Love Is Blind: After The Altar' Season 3 Has A Release Date & It's Very Soon
By Grace Wehniainen
Brittany Snow Files For Divorce From Tyler Stanaland After 'Selling The OC' Drama
By Grace Wehniainen and Radhika Menon
'Bling Empire: New York’ Star Tina Leung Has A Superhero Alter-Ego
By Alyssa Lapid
Get Even More From Bustle — Sign Up For The Newsletter