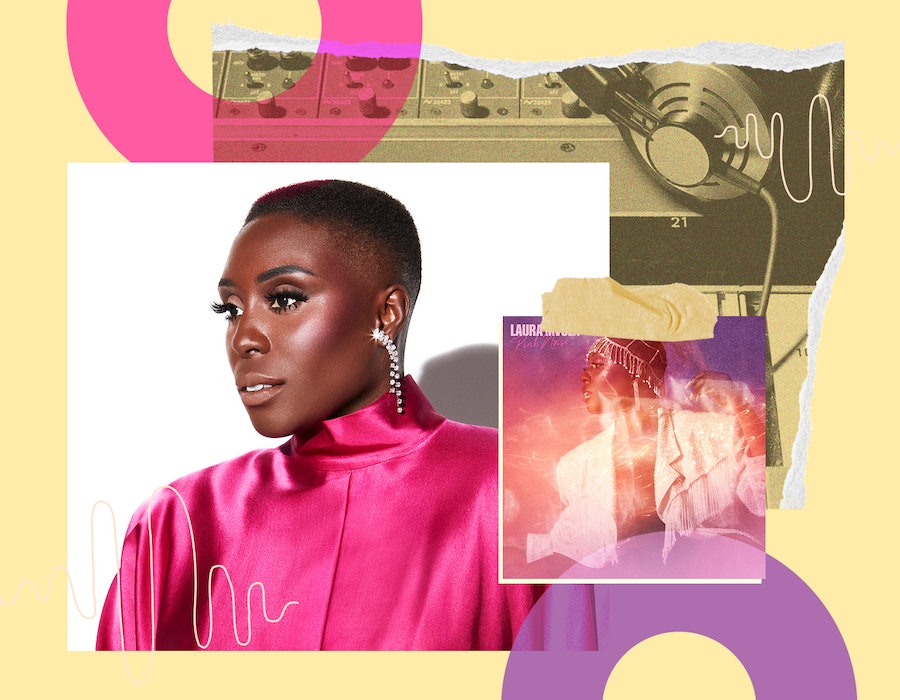 Laura Mvula has been away from the music industry for some time. But now – five years after her last release, The Dreaming Room – she is ready to return. And what a comeback. Her new record, Pink Noise, feels like a beautifully long exhale. Influenced by some big names including Prince, Grace Jones, Kate Bush, and original Genesis frontman, Peter Gabriel, this is Mvula’s first studio album with her new record label Atlantic – and, she says, it feels good.

Rewinding to where it began for Mvula, the Birmingham-born artist’s debut album, Sing To The Moon, came out in 2013 to critical acclaim. In the same year, she went on to be shortlisted for the Mercury’s Prize, and won two MOBO awards. However, in 2017, she was dropped without much explanation by her record label at the time, Sony. “When I was signed, and then suddenly not signed, I took time to digest what that meant,” she tells me.

In retrospect, she says, her time away has flown by. “It doesn’t feel like five years. Maybe because so much has happened in that time. Right now, it feels amazing to be the other side of having worked so hard for so long.”

In February, she started to put the wheels back in motion, with a livestream titled Under A Pink Moon. Reminding fans of what they’d been missing, she followed up with two new singles: the feel-good, synth-pop Safe Passage; and her latest, Church Girl, which is accompanied by a vibrant music video, and lyrics that feel like a true release. “How can you dance with the devil on your back? How can you move?” Mvula sings.

Often difficult to categorise or pigeonhole into any one genre, Mvula’s sound has been called neo-soul, contemporary R&B, jazz... She’s even had a new genre coined after her music – gospeldelia. But this time around, Pink Noise is an ode to the decade she was born – think high-spirited, electric ’80s pop that you can’t help but move to.

We catch up ahead of her album release on July 2, to talk about why her dad’s praise means so much, her favourite place to make music, and what’s currently on her playlist.

On Returning To Music & Regaining Confidence

It's been five years since your last album, how does it feel coming back?

Every time someone says, ‘it's been five years’, I'm always a bit shocked, because so much has happened. Right now, it feels amazing to be on the other side of having worked so hard for so long. To have endured all the crap that I've come through to get to this point. And to feel genuine excitement for what's next. So all round, I'm proud of myself, I’m in a good place.

What's been the best part, and what’s been the hardest, about having this time away?

I think I've been blissfully unaware of the rhythm of the way the commercial music industry works. So in my blissful ignorance, I was just able to be in the moment. When I was signed, and then suddenly not signed, I took time to digest what that meant. The difficult thing was the feeling of rejection quite early on after Sony dropped me. I felt full of dread with the uncertainty of what was going to come next. I think I definitely lost some confidence.

How has that experience changed you as a person?

As a person, I think I'm probably hardened. Vulnerability, and being soft inside is really important to me. But I'm also aware of how I have learned, and I'm still learning, to be a little bit less attached to what people's immediate impression of me is. I'm much more focused on what's good for me. I'm trying to enjoy life.

Tell me about the decision to release remixes of some of your previous singles?

The label asked me to do it – they had to really work to persuade me, because I was so up my own arse! With Sing To The Moon and Dreaming Room I was like, “You don’t understand they’re sacred songs to some people.” I wouldn’t shut up about it. And then I did Sing To The Moon, and I was like, “Yeah, this is really good!” I had to eat my own hat.

What’s a song that you grew up listening to and still know all the words?

The embarrassing thing is that I have a problem with lyrics, generally. So I feel like, including my own songs, I don't know the lyrics to any song all the way through. However, the first song that came to mind was I Wanna Be Where You Are by The Jackson 5. Even with that, the only thing I can remember is the chorus.

Of those you can remember, what’s one of your favourite lyrics?

There's a song that's not out yet on my new record. I won't tell you what the song is called, but the opening line is: “I wore pretty colour, and fancy feathers, and I saw I could walk on water just like no other.” I like that lyric a lot.

Is there a genre you wish you made music in?

I reckon I would be a sick R&B artist. I think it's going to come actually – I'd give some of them a run for their money.

If you could play any instrument what would it be?

Guitar. I really want to learn the guitar.

Name a musician or a band that you love, that people wouldn't expect you to listen to?

Great question – Dua Lipa. I only say that because I was playing some of her music to someone I work with, and they were really shocked. I was like, “Why is this shocking to you?” Yeah, I like her.

On Falling In Love & Bedroom Writing

Is there anything better than the feeling of a post-performance high?

I don't know if I've ever been in love, so I wonder if that's the thing. Check in on me in a few! I believe in it – it’s a pink moon right now. When I put out the live stream before the EP, and we called it Under A Pink Moon, I didn’t even know a pink moon was a thing. Now, I feel like everything is aligning, so all the desires of my heart will be granted. Maybe this ‘in love’ thing will be even more than I imagined.

If you weren't a musician, what would you be?

I think I'd be a super pretentious interior designer, I think I’d be brilliant at that. I have no idea how one goes about becoming one. I don't know whether people are just trying to sweet me, but when people come into my apartment – I don't live anywhere swanky – they always say, “Oh, your place is so beautifully done up, you’ve got a good eye.”

What was the moment when you really felt like you were a musician?

When my dad overheard me singing. We were doing a 50th birthday party, I was doing backing vocals and playing the piano, and I was practising my part. One day he came back from work, and it was the first time he said, “Laura, your voice sounds really awesome.” That's when I thought, I'm a musician. Literally, that was the moment, I'm being deadly serious. My dad is not a person that gave out high praise, and he was a musician.

What's one of your favourite places to write, and make music?

Honestly, my bedroom. I think there's nothing more intimate than making music in my bedroom. And for some reason, I remember those sessions – if you want to call them sessions – more than any others. It’s me at my truest self.