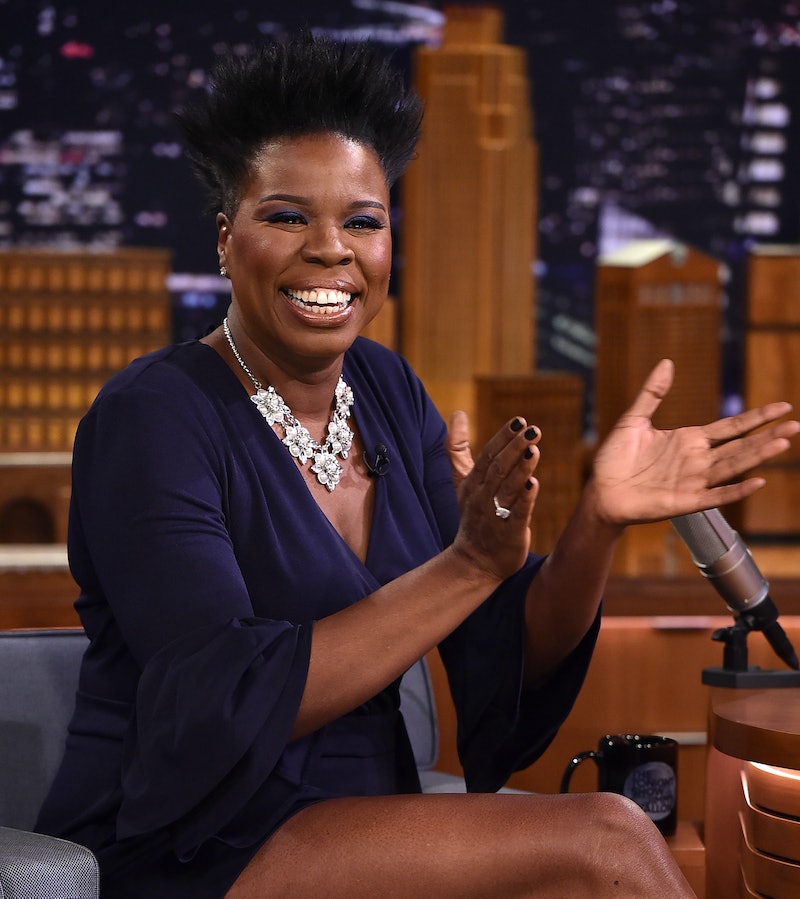 There's no one in Hollywood — nay, the world — who is a better cheerleader than Leslie Jones. From her side-splitting Olympics commentary to her mood-boosting affirmations during the 2020 Emmy nominations, Jones knows how to make any live event interesting. And her reaction to watching Steve Kornacki break down the 2020 election results in real time will put a smile on even the weariest faces.

If you haven't been glued to the TV for four days straight, it's time to get acquainted with Kornacki, aka Twitter's new boyfriend, as Vogue crowned him. At any given moment, if you flip over to MSNBC, there's a good chance you'll be welcomed by an enthusiastic and sleep-deprived Kornacki and his khaki pants. If you're lucky, he might even be circling key counties at "The Big Board" and calculating how many more votes former Vice President Joe Biden needs in order to edge out President Donald Trump.

Talking to Jimmy Fallon earlier this week, Kornacki said presidential elections are like his Olympics, so it's only fitting that star Olympic commentator Jones is watching along with the rest of the world. This afternoon, Jones tweeted about how she turned on MSNBC and was taken aback when she saw Chris Hayes instead of Kornacki. "Ok what is this f*ckery WHERE IS STEVE??" she joked. "Lol I don't trust this dude!!"

In the video accompanying her tweet, Jones continued to question Kornacki's whereabouts. "Wait, Steve gone? Who is this dude?" she asked. "Who is this dude, and is he as good as Steve? Is he going to write on the board? Is he going to pull out a calculator?" Obviously, these are all questions that must be answered, but Jones seems to have made up her mind about Hayes already. "I'm going to tell you right now, I already don't like him because he has on a full suit — that's not the Steve way," she said. "Where the f*ck is Steve! Steve! Where are you? Where are you and your calculator? This man does not have a calculator!"

Hopefully Jones read the replies under her tweet, which said that Kornacki was just taking a much-needed break. Turns out, it's only a matter of time until everyone's favorite election mathematician returns to "The Big Board."

More like this
The Black Lotus Staff Has "Had Enough" In The 'White Lotus' Spoof From 'SNL'
By Brad Witter
Man Meets Politics: ‘Boy Meets World’ Star Ben Savage Is Running For Congress
By Jake Viswanath
What Really Happened Between Lea Michele & Sadie Sink On 'The Tonight Show'
By El Hunt
This Pre-'Love Island' Video Of Olivia & Zara Together Changes Everything
By Bustle UK
Get Even More From Bustle — Sign Up For The Newsletter
From hair trends to relationship advice, our daily newsletter has everything you need to sound like a person who’s on TikTok, even if you aren’t.