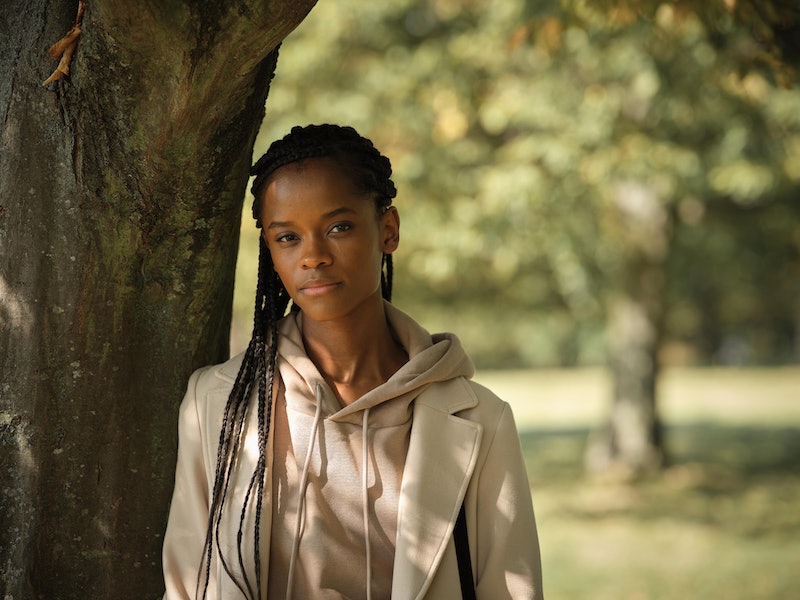 Following on from its first series in 2019, Dominic Savage's anthology series I Am will soon be returning to screens. Its second season will feature Black Panter star Letitia Wright in I Am Danielle, a story is based on the actor's own real-life experiences, alongside C.J. Beckford (Victoria, The Trial of Christine Keeler, Sitting in Limbo) and Sophia Brown (The Capture, Giri/Haji).

Filming for the episode wrapped earlier this month, as Channel 4 revealed in a press statement sent to Bustle UK, but there's no mention of an official air date. I have reached out for further info and will keep you updated on a response.

Little has been revealed about the series, but it will follow the same production format as the first. Each episode is developed and written by Savage, but he also collaborates with the lead actor and encourages them to improvise and contribute to the story they want to tell.

Speaking about the project, Wright said: “Collaborating with Dominic Savage has been an amazing experience. His unique and sensitive style of directing has stretched me as an artist. I’m so proud that we came together on a story that we both felt was important to explore & share with the world.”

Savage said: "Making this film with Letitia was so exciting, invigorating, and full of creative joy. It is exactly how I love to work. In complete partnership and understanding. We were so in tune with the story we were telling, and each day was purely instinctive, challenging, and always truthful. I’m proud to be able to bring this story of love with all its difficulties to the screen.”

The first series of I Am premiere last year and featured Vicky McClure in I Am Nicola, Samantha Morton in I Am Kirsty, and Gemma Chan in I Am Hannah. It was Channel 4’s biggest 10pm drama in six years, the Radio Times reports.

The I Am series is produced by Emmy-award-winning production company Me+You. Speaking about I Am Danielle, Krishnendu Majumdar, co-founder of Me+You, said that Savage and Wright "have collaborated to create something truly special."

This year Wright will also star in Steve McQueen's series Small Axe in the episode Mangrove on November 18 alongside Star Wars star John Boyega, and she is also part of the Death on the Nile's star-studded cast, which is out a month later.

More like this
Alan Carr's 'Changing Ends' Is A Witty Sitcom Based On His Own Life
By Darshita Goyal
Everything To Know About The 'Daisy Jones & The Six' TV Series
By Maxine Harrison and Brad Witter
'The Last Of Us' Has Officially Been Renewed For Season 2
By Darshita Goyal
Claire Foy Spoke Out About 'The Crown's Gender Pay Gap
By Sam Ramsden
Get The Very Best Of Bustle/UK
Sign up for Bustle UK's twice-weekly newsletter, featuring the latest must-watch TV, moving personal stories, and expert advice on the hottest viral buys.