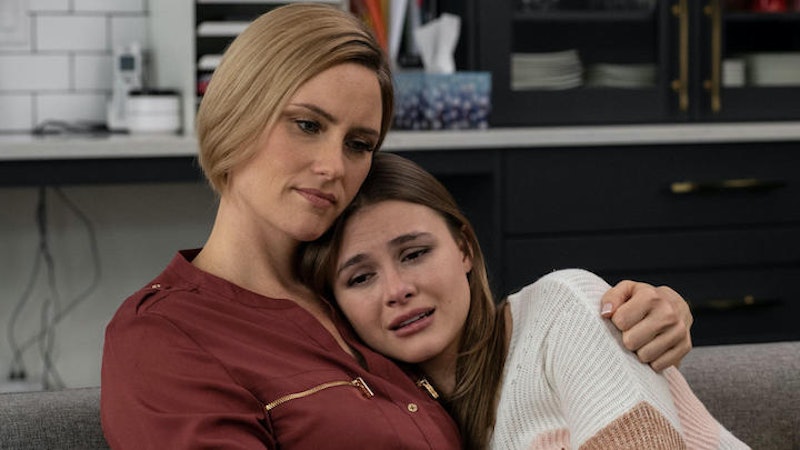 Lifetime's looking to take the "obsessive ex" trope and carry it out to an extreme, terrifying end with Obsession, their three night run of movies all chronicling one woman's experiences evading an especially obsessive stalker ex-boyfriend. The second film, Obsession: Escaping My Ex, premieres July 11, and it details the extreme lengths this woman must go to in order to escape her stalker. It's a situation that might seem far-fetched, but as with any scary story, there's a nugget of truth to it, so it bears asking: is Obsession: Escaping My Ex based on a true story?

Obsession: Escaping My Ex tells the story of Madison (Celeste Desjardins), who is trying to literally escape from the clutches of her freshly-escaped-from-prison ex-boyfriend, Blake (Travis Nelson). Desperate and alone, Madison will have to decide just how far she's willing to go to get away from Blake and his sinister intentions for her.

As stories about abduction and kidnapping go, it might be a bit more towards the extreme end of the spectrum, but the situation isn't exactly unheard of. Obsessive ex-partners are a very real, not uncommon occurrence in the dating world, and while many usually won't resort to abducting the target of their affections, it still happens.

That said, Obsession: Escaping My Ex doesn't seem to be based on any specific true story, or, at least, neither Lifetime nor the filmmakers have cited any specific story as the foundation for any of the films in the Obsession trilogy. So while Obsession: Escaping My Ex might not be based on a true story, there's still that shade of realism to it, that bit of plausibility that keeps suggesting that something like this could happen to any of us.

That goes for the entirety of the Obsession trilogy, as well, as it lays out a very plausible relationship arc: in the first film, Obsession: Stalked By My Lover, Madison finds herself in need of a roommate. As it turns out, her new roommate, Blake, turns out to be a very attractive, potential partner who seems to just have it all. Eventually they start hooking up, and soon the fiery romance between them turns into something a bit more... off-putting as they get to know each other a little more. Then, after Obsession: Escaping My Ex, Madison's left to deal with the fallout from her confrontation with Blake, almost literally haunted by the things she's gone through at the hands of her ex-boyfriend.

There's a lot of elements that, again, seem a bit over-the-top on the surface, but are still very much grounded in reality. It's those realistic elements that that make the film — and the many more like it — so scary.

More like this
Gerard Butler Insisted On Adding This Pivotal Scene To 'Plane'
By Catharina Cheung
Jemima Khan Used Her Own Life As Inspo For 'What’s Love Got To Do With It?'
By Darshita Goyal
Kukulkan From 'Wakanda Forever' Has A Surprising Connection To Marvel History
By Grace Wehniainen
'Knock At The Cabin' May Start Streaming Sooner Than You’d Think
By Jake Viswanath
Get Even More From Bustle — Sign Up For The Newsletter
From hair trends to relationship advice, our daily newsletter has everything you need to sound like a person who’s on TikTok, even if you aren’t.