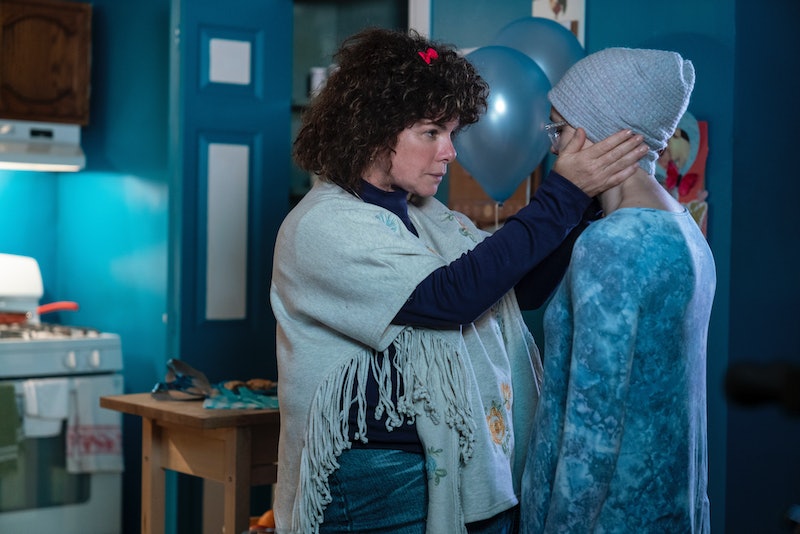 This article contains details about physical and mental abuse, which some may find triggering.

Several months before Hulu’s The Act vaulted the story of Gypsy Rose Blanchard back into the public eye, Lifetime released its own dramatization of the case: Love You to Death.

The 2019 film stars Oscar winner Marcia Gay Harden as Camile, the seemingly “perfect” caretaker of her daughter Esme (Emily Skeggs), who uses a wheelchair and suffers from a number of ailments. But as the Love You To Death synopsis teases, the mother and daughter are nothing like they seem. “You are a sick girl!” Camile screams in the Love You to Death trailer. “You’re using me to make the world love you!” Esme yells back.

The Love You to Death synopsis gives away the big twist: Camille is later found murdered. Esme, who has disappeared, is initially assumed to have been kidnapped by the killer, but then a shocking secret emerges: Esme wasn’t kidnapped, she ran away with her boyfriend (Brennan Keel Cook) after conspiring to kill Camille. Not only that, she’s perfectly healthy and was only led to believe that she wasn’t by her controlling and abusive mother.

Though aspects of Love You to Death are obviously dramatized, the basic details are pretty true to the real story. As reported by ABC, Gypsy and her mother, Dee Dee Blanchard, relocated to Springfield, Missouri from Louisiana in 2008 and moved into a house built by Habitat for Humanity. Dee Dee didn’t work, but Gypsy said they were able to get by on food stamps and social security and disability checks. Medicaid covered Gypsy’s medical expenses.

By that time, Dee Dee had been claiming for years that Gypsy had multiple medical issues, including epilepsy, leukemia, muscular dystrophy, hearing impairments, and a learning disability. She also claimed Gypsy required a permanent feeding tube and needed to use a wheelchair. Their story attracted national attention, landing them TV appearances, monetary support from charity groups, and free trips to Disney World.

Experts later came to believe that Gypsy was a victim of Munchausen by proxy, which is when a caregiver makes up or causes an illness or injury to a person under their care. In a later interview with People magazine, Gypsy described her mother as “very protective,” adding that Dee Dee was her only friend aside from her stuffed animals until she was older. She also claimed that Dee Dee later became physically abusive, chaining her to a bed, withholding food, and hitting her with a coat hanger. Gypsy told Dr. Phil that she didn't know what medications her mother put in the feeding tube and that she was forbidden to speak at her doctor's appointments. She also said Dee Dee told her that she was mentally incompetent and would frequently switch doctors if they didn't tell her what she wanted to hear.

As Gypsy got older, she grew more curious about the outside world. Per ABC, she eventually began an online relationship with Nick Godejohn, who she met on a Christian dating site around 2013. In March 2015, the two attempted to stage a meeting, hoping that Dee Dee would allow them to date if she thought they’d met in person. Instead, she forbade Gypsy from seeing him.

“She got jealous, because I was spending a little too much attention on him, and she had ordered me to stay away from him,” Gypsy told ABC in 2018. “Needless to say, that was a very long argument that lasted a couple weeks. Yelling, throwing things, calling me names: b*tch, slut, whore.”

Fed up, Gypsy devised a plan with Godejohn to kill her mother. In June 2015, they carried it out. Godejohn came to the Blanchards’ house, where Gypsy handed him gloves, duct tape, and a knife. He then went into Dee Dee’s room, where she was sleeping, and stabbed her. Afterward, Gypsy and Godejohn had sex in her bed and fled the home, staying at a local motel for several days before the police pieced things together and arrested them. Godejohn was ultimately sentenced to life in prison for Dee Dee’s murder, while Gypsy received a 10-year sentence after pleading guilty to second-degree murder. They’re both currently still in prison, with Gypsy’s release slated for 2025.

More like this
All The Theories About Kathleen Peterson’s Death
By Morgan Leigh Davies
Where Is Allan Gore Now? The ‘Candy’ Subject Moved On Shortly After Betty’s Death
By Gretchen Smail
Justin Timberlake’s ‘Candy’ Character Really Investigated Betty Gore’s Killing
By Brad Witter
The True Story Of Candy Montgomery From Hulu’s True Crime Series
By Radhika Menon
Get Even More From Bustle — Sign Up For The Newsletter

This article was originally published on Jan. 25, 2019