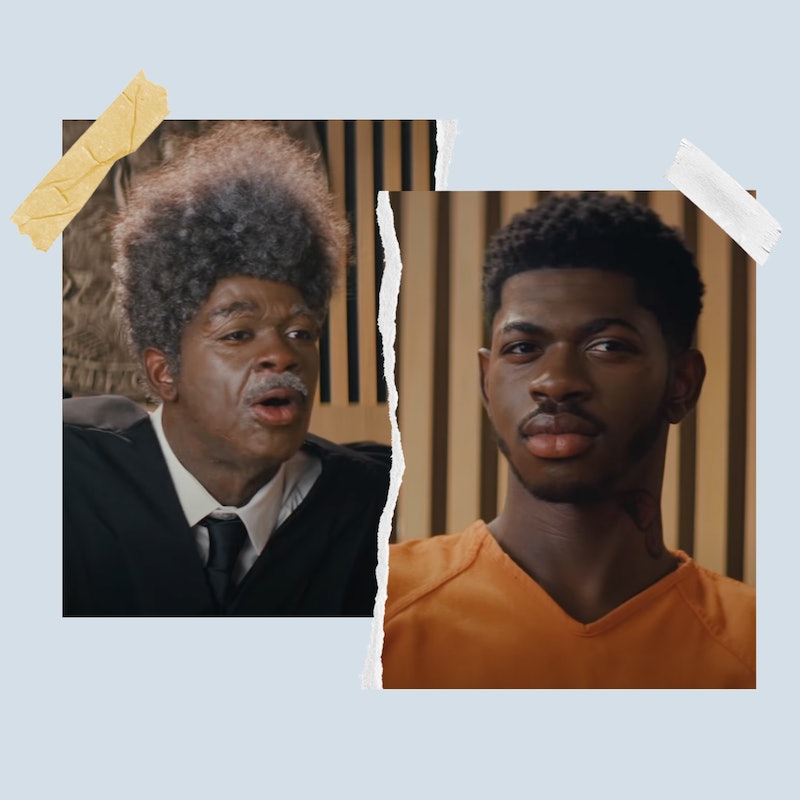 Lil Nas X is once again proving that no one knows how to troll quite like he can by spoofing his legal drama with Nike in a parody titled “Satan Shoes Trial.” The hysterical video — which sees the rapper playing characters such as a judge, a lawyer, and himself — also served as a promotional tool for his forthcoming Kanye West-produced single “Industry Baby” featuring Jack Harlow.

The tiff between the rap star and Nike started in March when the shoe brand sued MSCHF Product Studio for their collaboration with Lil Nas X involving 666 pairs of “Satan Shoes,” which were modified Nike Air Max 97 sneakers with each midsole allegedly containing a drop of human blood. The sneaker was originally released in tandem with the viral music video for the song “Montero (Call Me By Your Name),” which showed the 22-year-old sliding down a stripper pole to hell to give the devil a lap dance. Though Nike and MSCHF quickly settled the lawsuit, Lil Nas X has been taking to the internet to make fun of himself and the situation ever since.

Not only has Lil Nas X changed his social media avatars to a mock mugshot, but he also has been entertaining fans with his take on what will happen when he shows up to court.

He captioned one TikTok video, which showed him crying while doing choreographed dance moves, with “When you have court on Monday over satan shoes and might go to jail but your label keeps telling you to make TikTok videos.”

In another tweet, he jokingly write about deciding what to wear, captioning a photo with, “Trying really hard to decide what I should wear to court on Monday for the satan shoes case.”

He also posted a TikTok pretending to be standing in front of a judge, with the caption, “The judge tomorrow when I try to flirt with him to avoid going to jail.” Fans got in on the fun as well, sharing their thoughts on how well the star sets the bar for using social media to promote his music.

Lil Nas X’s “Industry Baby” featuring Jack Harlow and co-produced by Take A Daytrip and Kanye West drops on July 23. Until then, you can rewatch his “Montero” music video to hold you over.