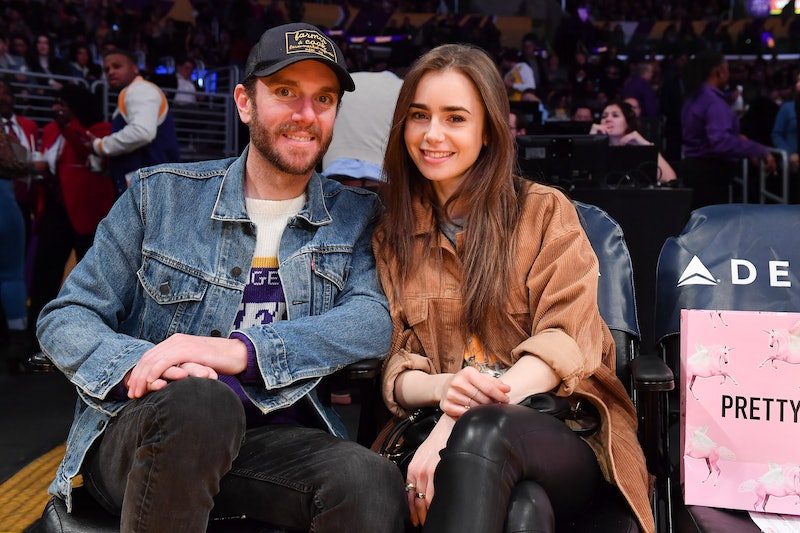 Wedding bells are officially ringing for Lily Collins! In an Instagram post shared on Friday, Sept. 25, Lily Collins announced her engagement to director Charlie McDowell after a little more than a year of dating, sharing adorable photos of the momentous event. "I’ve been waiting my lifetime for you and I can’t wait to spend our lifetime together..." the Emily in Paris star wrote, alongside a slideshow of images of McDowell popping the question in the desert. She later described the moment as "the purest joy I've ever felt" in a follow-up post showing off her ring.

McDowell also shared the same photo of Collins grinning and holding up her newly-decorated left hand on his own Instagram account. "In a time of uncertainty and darkness you have illuminated my life," he captioned the snapshot. "I will forever cherish my adventure with you." According to Page Six, the director designed the "custom, one-of-a-kind rose-cut diamond" with jewelry designer Irene Neuwirth, describing it on social media as "the most beautiful ring I've ever seen."

Collin and McDowell were first linked in July 2019, when they were photographed on a romantic outing in Los Angeles; a month later, the actor confirmed the relationship by sharing a picture of her embracing McDowell during a trip to Paris. Since then, both she and McDowell have posted quite a bit about their romance, even revealing that they had adopted a dog together in April.

In 2018, the actor opened up about what she is looking for in the perfect partner. "I've learned a lot about myself because of the relationships that haven't worked out. I've had some good and some bad relationships," she told The Daily Mail. "I want someone to make me laugh. I need to just be enough for someone. I would like to be accepted in my pajamas or wearing something glamorous." It seems as if she has found that with McDowell, who, like Collins, grew up with famous parents. (She is the daughter of musician Phil Collins, while he is the son of actors Mary Steenburgen and Malcom McDowell.)

"You’re a true gift of a human @charliemcdowell," Collins wrote on Instagram in July, to celebrate the director's 37th birthday, describing him as "an incredible boyfriend and the best dog dad." She then continued to sing his praises, adding, "You’ve opened my eyes and deepened my heart. You constantly inspire me to dream big and go outside of my comfort zone. Every day is an adventure with you and I can’t wait to explore more of the world together (when we can). I love you so much..."

In addition to wedding planning, Collins is looking ahead to the premiere of her new Netflix series, Emily in Paris, from Sex and the City and Younger creator Darren Star. The actor stars as Emily Cooper, a 20-something American who moves to Paris for a marketing job and attempts to find career success and romance in the City of Love. "I’d been looking for a fun, comical, witty, fashion-y, loving-life type of character for a long time," she told W Magazine about the series. "I needed the character to also have smarts, and a heart, and not to just be one thing. Playing Emily, for me, was a release, because I’d never gotten to really show that side of myself before." Describing the series as a show about self-love and confidence, Collins continued, "she's proud of who she is, but she's not afraid to adapt to where she is as well. Throughout the series, her confidence grows. She doesn’t worry about what people are thinking."

For now, though, Collins has her own big life development to celebrate.

More like this
Remember When Benedict Cumberbatch Announced His Engagement In A Newspaper Ad?
By Hugh McIntyre
Jason Oppenheim Broke Down In Tears Over His Chrishell Breakup On The 'Selling Sunset' Reunion
By Bustle Editors
The 1st Photo Of Priyanka & Nick's' Baby Comes After 100 Days In The Hospital
By Jake Viswanath and Hugh McIntyre
Watch The Dramatic First Trailer For Netflix's Jennifer Lopez Documentary
By Alyssa Lapid
Get Even More From Bustle — Sign Up For The Newsletter