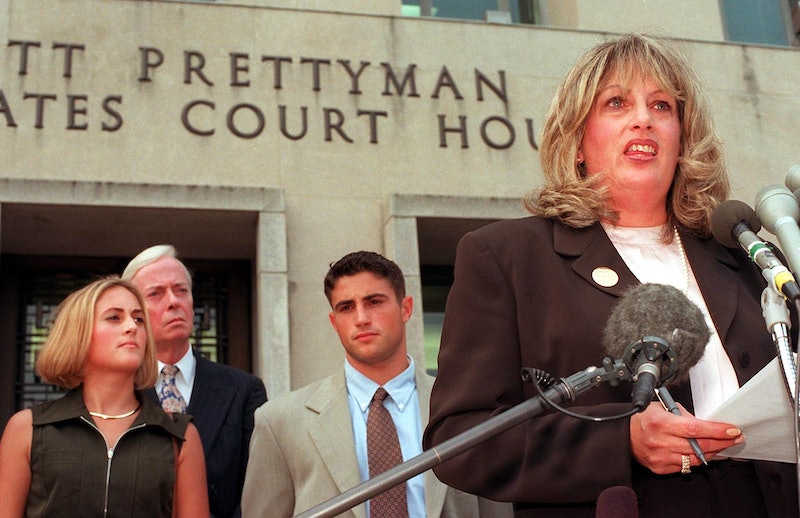 One of the central figures in FX’s Impeachment: American Crime Story is Linda Tripp (Sarah Paulson), the Pentagon employee who provided crucial evidence for President Bill Clinton’s impeachment by exposing his affair with Monica Lewinsky.

Most of the focus during the scandal was on Tripp herself, but the show occasionally makes reference to her kids and ex-husband. At the time, Tripp was a divorcee raising two children from her first marriage, Allison and Ryan. In the decades since, Ryan has stayed out of the public eye, but Allison recently spoke with Vanity Fair about the show’s portrayal of her mother, who died at 70 years old of pancreatic cancer in April 2020.

“They’ve shown her as a hard-working, loyal, gritty woman who has a lot of integrity,” Allison, herself a mother of four, said of Episode 1. “My mom didn’t get to see this story finally coming out in a more realistic lens and not a vilifying lens. At least my children will get to see it because they too have seen and heard about a lot of that hurt through the years. Hopefully the series will continue on this path.”

Allison added that while she was not consulted for Impeachment and did notice a few inaccuracies regarding her mother, she feels that Sarah Paulson’s performance is a fair representation. “She captured a lot of my mom—just how smart and witty she was…. I had to laugh at a couple of lines because that’s how she got through the pain…the show did a good job digging deep to find out truly how she ticked.”

Reflecting back on the Clinton-Lewinsky scandal, Allison told Vanity Fair that the cruel media coverage of her mother made her final years of high school hell. In Tripp’s later years, she apologized to Allison and Ryan for how her involvement affected their family. “I didn’t feel like she needed to apologize though,” Allison said. “Because as your mom that is your worst nightmare to put your child through that… it brings me a great sense of pride to be her daughter. I’m just very thankful for the time I had with her, for all she did teach me, and my kids.”

Over a decade after her divorce from her first husband Bruce Tripp, Linda Tripp remarried German architect Dieter Rausch in 2004. The couple first met when they were children during a visit Tripp’s family took to Germany and later reconnected as adults when Tripp invited Rausch to visit her Middleburg, Virginia home in 2000. After his visit, Rausch relocated to Middleburg to live with Tripp and the couple decided to open a Christmas store together, which they called “The Christmas Sleigh.”

Before Tripp’s death, she and Rausch lived together on a farm in Middleburg with 16 horses. Allison now runs the Christmas store in addition to working as a real estate agent and a consultant for the clothing boutique For Love and Sapphires.

More like this
Man Meets Politics: ‘Boy Meets World’ Star Ben Savage Is Running For Congress
By Jake Viswanath
Michael B. Jordan Tackled His "Public Breakup" With Lori Harvey On 'SNL'
By Brad Witter
Here’s What Happens To Bill & Frank In 'The Last Of Us' Video Game
By Brad Witter
Shonda Rhimes Responded To The Surprise Exit Of A Day 1 'Grey's Anatomy' Figure
By Grace Wehniainen
Get Even More From Bustle — Sign Up For The Newsletter
From hair trends to relationship advice, our daily newsletter has everything you need to sound like a person who’s on TikTok, even if you aren’t.