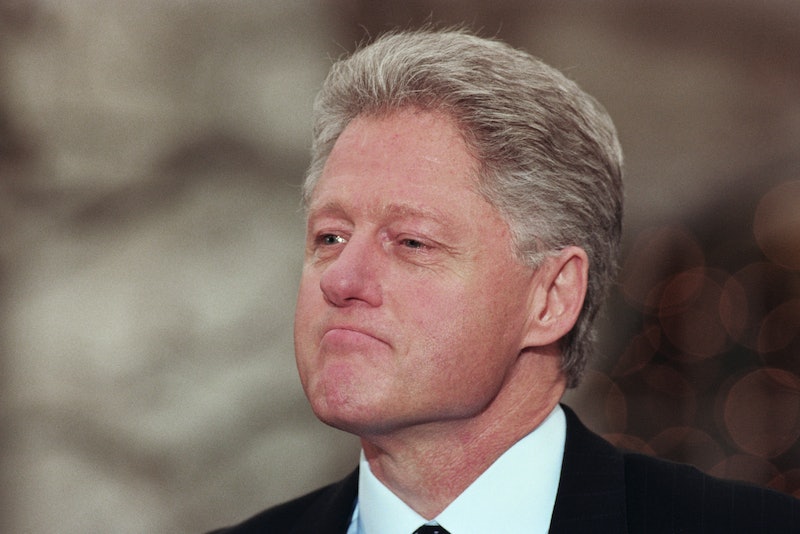 Monica Lewinsky wanted to put her affair with Bill Clinton behind her, but when Ryan Murphy offered her the chance to produce Impeachment: American Crime Story, she couldn’t pass it up. “It’s much better to be going through this as part of something than to be desperately trying to find out what’s on the show,” Lewinsky recently told The New York Times.

The FX series chronicles the events leading up to Clinton’s 1998 impeachment through the perspectives of the women involved, including Lewinsky (played by Beanie Feldstein); sexual misconduct accusers Paula Jones (Annaleigh Ashford) and Kathleen Willey (Elizabeth Reaser); and former Pentagon employee Linda Tripp (Sarah Paulson), who ultimately exposed Lewinsky’s relationship with Clinton. Lewinsky ⁠tried to make the FX series as accurate as possible, advising on everything from dialogue to wardrobe. She even encouraged the writers to include the moment she flashed her thong at Clinton, even though she told the Times it makes her cringe. “I just felt I shouldn’t get a pass,” Lewinsky said.

Now two decades removed, Lewinsky looks back on her relationship with Clinton as a “colossal mistake,” but said she saw Impeachment as an opportunity to redefine the scandal that’s shaped so much of her life. “In order to move forward, I have to take risks. I have to try things. I have to continue to define who I am,” she told the Times.

Here’s a look back at how the affair played out.

At 21, Lewinsky relocated from California to Washington, D.C. after a family friend helped her land an unpaid internship in the office of Leon Panetta, President Clinton’s Chief of Staff. Though interns normally wouldn’t interact with the president, the late 1995 government shutdown (the longest in history) caused Lewinsky to take on increased duties due to the absence of many White House staffers. According to independent counsel Kenneth Starr’s report, Clinton, “came to Mr. Panetta’s office frequently because of the shutdown, and he sometimes talked with Ms. Lewinsky.”

Lewinsky testified to a grand jury that she initiated her relationship with Clinton through “intense flirting.” According to her account, they had their first sexual encounter in Clinton’s private study four months into her internship, after both acknowledging they were “attracted to each other.” Lewinsky claimed in her testimony that she had eight sexual encounters with Clinton while she worked at the White House, and two additional sexual encounters after she left. They also engaged in lengthy phone conversations and exchanged gifts, including a special edition of Walt Whitman’s Leaves of Grass that Clinton gave her in 1996 as a belated Christmas present. “I never expected to fall in love with the President,” Lewinsky told the grand jury. “I was surprised that I did.”

According to the Starr report, Clinton terminated their sexual relationship on President’s Day, then revived it on March 31.

April 1996: Lewinsky is transferred to The Pentagon and befriends Tripp.

After White House and Secret Service employees remarked on Lewinsky’s frequent presence in the West Wing, then-Deputy White House Chief of Staff Evelyn Lieberman transferred her to The Pentagon to be spokesman Ken Bacon’s assistant. Lieberman told The New York Times that the move was due to alleged “inappropriate and immature behavior” and inattention to work. Lewinsky testified that White House staffers blamed her for the President’s apparent interest in her. “They didn't want to look at him and think that he could be responsible for anything, so it had to all be my fault,” she said. “I was stalking him or I was making advances towards him.”

In her exit interview with staff director Timothy Keating, Lewinsky asked to remain in the White House. “He told me I was too sexy to be working in the East Wing and that this job at the Pentagon where I’d be writing press releases was a sexier job,” Lewinsky said of Keating’s response. “I was never going to see the President again. I mean, my relationship with him would be over.” Lewinsky told investigators that after she informed Clinton of her dismissal two days later, he promised to bring her back to the White House if he was re-elected.

While working at The Pentagon, Lewinsky claimed that she and Clinton continued to speak frequently and engaged in phone sex. It was during this time that Lewinsky befriended Tripp, a former White House employee, and began confiding in her about the affair.

The Starr Report described a Valentine’s Day “love note” that Lewinsky placed in the Washington Post for Clinton, in which she included a Romeo and Juliet excerpt. Weeks later, their sexual encounters resumed after an almost year-long hiatus. Lewinsky — wearing the infamous navy blue Gap dress that Clinton later stained with semen — attended the president’s weekly radio address and had her photo taken with him, prompting a visit to his private study.

Clinton testified to a grand jury in August 1998 that he ended his “improper intimate contact” and inappropriate encounters in early 1997. “I regret that what began as a friendship came to include this conduct, and I take full responsibility for my actions,” he said. According to Starr’s report, Clinton had told Lewinsky that though he “had had hundreds of affairs,” he had “made a concerted effort to be faithful” to wife Hillary Rodham Clinton after he turned 40. “He said he was attracted to Ms. Lewinsky, considered her a great person, and hoped they would remain friends,” the report read. “He pointed out that he could do a great deal for her. The situation, he stressed, was not Ms. Lewinsky's fault.”

Not long afterward, Tripp turned over secret recordings of her phone calls with Lewinsky detailing the Clinton affair, precipitating the president’s historic 1998 impeachment. Once out of office, Clinton continued to pursue political and philanthropic endeavors, supporting his wife Hillary in her 2008 and 2016 presidential campaigns. Lewinsky, meanwhile, became the subject of public ridicule and retreated from the public eye until the mid-2010s, when she began speaking out against bullying and public shaming. Though Clinton said in a 2018 interview that he apologized to Lewinsky publicly along with “everybody in the world,” he admitted he never spoke to her privately about the fallout of their relationship.

“Until [the #MeToo movement] historians hadn’t really had the perspective to fully process and acknowledge that year of shame and spectacle [I experienced],” Lewinsky wrote in a 2018 essay for Vanity Fair. She added that while what happened between her and Clinton was not sexual assault, it’s now recognized as “a gross abuse of power” due to their 30 year age difference and his position in office. “I now see how problematic it was that the two of us even got to a place where there was a question of consent,” she wrote. “Instead, the road that led there was littered with inappropriate abuse of authority, station, and privilege.”

More like this
Jodie Turner-Smith & Joshua Jackson's Relationship Timeline Includes Her Proposing
By Jake Viswanath
Matt Hancock's “Cringe” Jungle Karaoke Left Twitter Reeling
By Sam Ramsden
The First Trailer For 'That '90s Show' Includes So Many Nods To The Original Series
By Jack Irvin, Alyssa Lapid and Grace Wehniainen
Elizabeth Debicki On Her Approach To The Most Debated Scene From 'The Crown'
By Grace Wehniainen
Get Even More From Bustle — Sign Up For The Newsletter