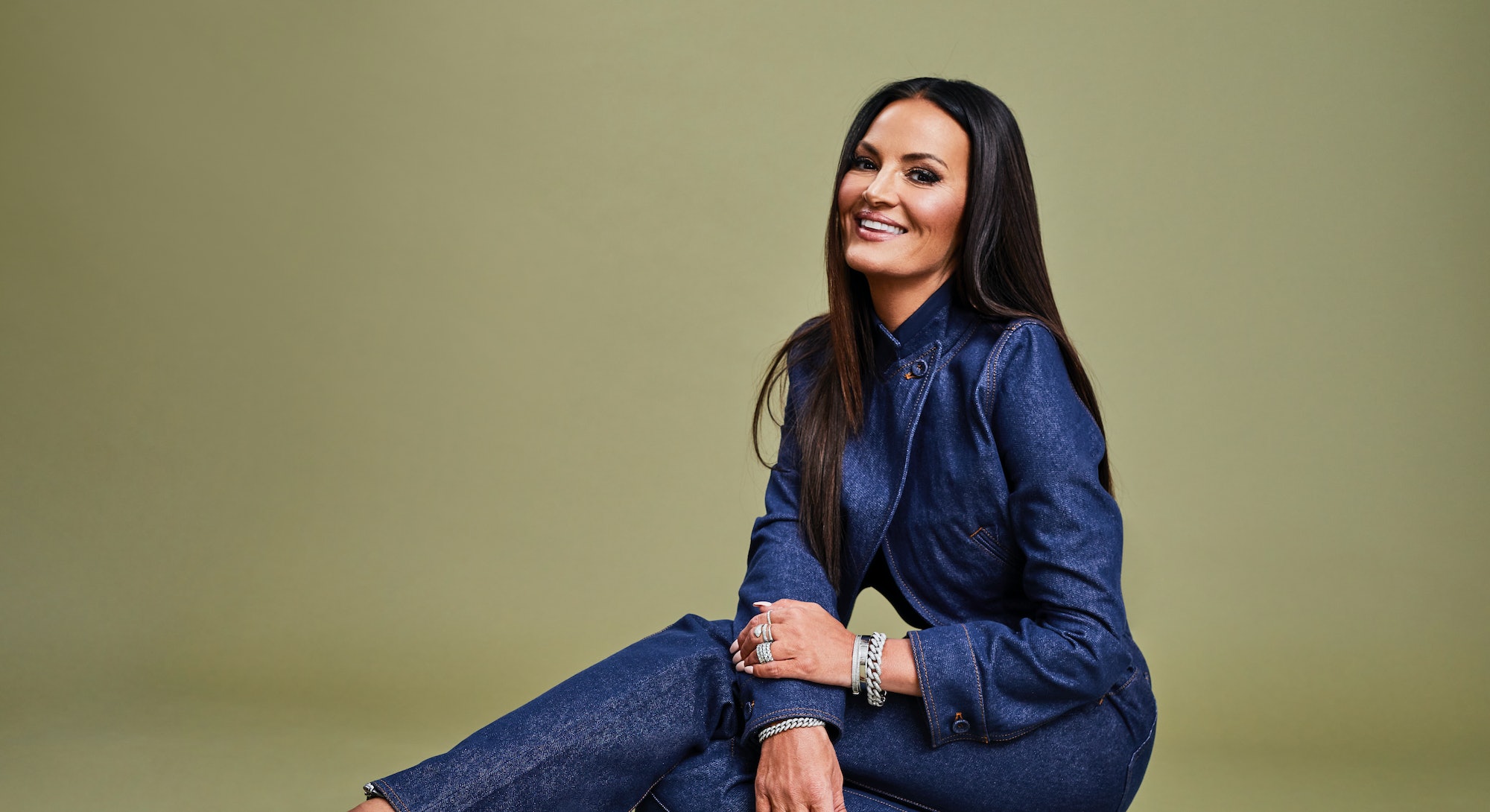 New York Fashion Week is a long way from the snow-covered streets of Salt Lake City, but Lisa Barlow will cross the country for Fendi. “I shop a lot. I wear a lot of Fendi on the show,” says Barlow, 47, referring to her three seasons and counting as a cast member on The Real Housewives of Salt Lake City. Adjacency to the glitterati — in this case, at a star-studded Fendi event attended by the likes of Kim Kardashian and Sarah Jessica Parker — is to be expected of Housewives. But Barlow is eager to assure me that Fendi had her number long before Bravo did. “I have a great network and I was invited to go,” she says. “People are like, ‘Oh, [you were invited] because you're a Housewife.’ I'm like, ‘No, that would probably deter me from coming.’”

Coming from a woman who once described herself in the third person on national television as “an amazing human being,” this comment is practically modest. Though her RHOSLC cast mates have accused her of over-orchestrating plot points to protect her image, Barlow’s Diet Coke-drinking, Taco Bell-loving, New York-accented bravado has garnered her legions of fans — and helped her earn the coveted status of “center snowflake” in the show’s current opening credits. It wasn’t until she got caught on a hot mic in Season 2 calling her former best friend Meredith Marks a “garbage whore” who “f*cked half of New York” in a shocking, expletive-laden rant off-camera that Barlow was forced to publicly acknowledge her own fallibility beneath her carefully curated, Fendi-clad exterior. Yet the moment only raised her stock in the Housewives world, where being messy and being easy to root for aren’t mutually exclusive — together, they’re what make you a star.

“The thing that attracts people to any Housewife is authenticity. I think that Lisa is being a hundred percent herself all the time,” says Brian Moylan, author of The Housewives: The Real Story Behind the Real Housewives. “She dresses well. She only eats fast food. She calls people ‘baby gorgeous.’ She's almost like a cartoon villain, but you also kind of love her. She's kind of an outsider, but she's a bitch. But she's also nice!”

I honestly think I have the life I have because I became Mormon. It set me on a different path.

Though Barlow apologized to Marks at the Season 2 reunion of RHOSLC in March 2022, fans were unconvinced by her attempts to grovel to Marks’ husband Seth in the first episode of Season 3, which began airing weekly on Bravo Sept. 28. When I meet Barlow in New York following her appearance on Watch What Happens Live, the apology tour is firmly over. Sipping a Diet Coke and munching on a fun-sized candy bar, she’s much more eager to discuss the hurt she was feeling leading up to the hot-mic moment, rather than the pain it caused Marks. “I'm more tender than people give me credit for,” Barlow says. “I feel like my trying to protect people has actually hurt me.”

One person who will forever be in Barlow’s corner is her husband John, whose unquestioning support of his wife was memorably winked at by Bravo producers, who once asked him in an early RHOSLC confessional interview if Lisa coached him for it. “Some of the other Housewives narrate who Lisa is,” he says of the less-flattering aspects of his wife’s TV depiction. “They take what they feel and portray it to the audience. I don't know if Lisa is given the opportunity to really express who she is.”

Growing up on Long Island and near Albany, New York, as the middle child of five sisters and one brother, Barlow was always drawn to the high life. As a teen, she’d take the train into New York City to go vintage shopping, scouring boutiques in Greenwich Village and Soho for old Levis; at night, she’d go clubbing at ‘90s hot spots like Palladium and Limelight. “I probably could have been trafficked or kidnapped and no one [in my family] would've noticed for a couple weeks,” Barlow jokes. At the same time that she was galavanting around Manhattan, Barlow was also undergoing a religious awakening. She and her family converted to Mormonism after missionaries had knocked on their door years earlier, and the family was getting more involved in the church. “For us, it just felt right. I like the teachings of Christ and the family aspect of all religions is great. It's really emphasized in the LDS faith,” Barlow says. “I honestly think I have the life I have because I became Mormon. It set me on a different path than I would have been on, had we not joined the LDS faith.”

Increasing devotion to her faith led Barlow to move to Salt Lake City to attend the predominantly Mormon Brigham Young University. “I absolutely loved it, but after one semester I went home,” Barlow says, calling her time at BYU challenging. With her Keratin-straight raven hair, a wardrobe that leans heavy on black, and an I’m walking here way of talking with her hands, Barlow stood out amid the homogenous milieu of Salt Lake City — and not in a good way. “My mom was like, ‘Everyone has blonde hair and blue eyes. No one here thinks you're pretty,’” she recalls. “People would ask me all the time, ‘Where are you from? What are you? And I was like, ‘What do you mean, what am I? A New Yorker!’”

Though Barlow moved back to New York and graduated from the State University of New York at Albany, her faith would ultimately draw her back to Salt Lake, where she’s now lived with her husband for over 20 years. The story of how the two met has become Housewives lore: Barlow revealed on RHOSLC that John had dated her sister before they’d gotten together, but as is often the case on reality TV, the nuance was stripped from the story. “My sister served in an LDS mission with my husband. They got home from their missions around the same time and he took her on two dates. He kissed her once and that was it,” she says. Years later, after Barlow broke up with her then-fiancé by surprise-FedExing him the ring back, she reconnected with John. “People are like, ‘Ew, gross. [Her sister and husband] slept together,’” she says. “No, we're Mormon. If my sister did, I could never be with him.”

Barlow identifies as "Mormon 2.0" — she drinks, she isn’t judgey about divorce, and she even runs the tequila company Vida Tequila with her husband — but she’s very serious about her faith. During the course of our conversation, she cries while talking about her love for God and says she wants her religion to be featured more prominently on RHOSLC. Yet it was her work in experiential marketing that initially got her noticed by the television producers behind The Biggest Loser, who, after seeing Barlow’s work producing activations for brands like HBO and CNN at events like Sundance Film Festival with her company Luxe Marketing, shot a reality TV pilot on her in 2014. “I knew in my gut it wasn’t going to get picked up,” she says. Six years later, Barlow had a more positive gut feeling. “I was like, ‘I think I'm going to have a TV show this year.’”

We have a really good lifestyle. Sometimes that makes people upset and creates icky feelings inside them.

She was right. The Real Housewives of Salt Lake City debuted in November 2020, at the height of the pandemic. Whether it was because of its exploration of modern Mormonism, or its casting of extreme personalities like Mary Cosby, who is married to her step-grandfather, and the volatile Jen Shah, who would later be accused of running a nationwide telemarketing scheme targeting seniors, the series quickly became a beloved installment in the franchise. Though it took Barlow some time to find her footing in Season 1 — many viewers had a hard time telling the difference between Barlow and her fellow brown-haired cast mate and former best friend, Meredith Marks — memorable Season 2 moments, like when she visited multiple drive-thru fast food chains in one sitting and consulted six different lawyers after Jen Shah’s arrest, helped her find her rightful audience.

The hot-mic moment only endeared her further: Who among us hasn’t talked shit in a moment of deep frustration? “Instead of making her seem like a snake who says one thing to Meredith and another thing in private, it made her seem real,” says The New Yorker staff writer and Housewives fan Naomi Fry. “That really sealed it for me.” This season, Barlow is absolutely trying to get back on top in ways that are “completely Machiavellian,” Fry says, by aligning herself with Housewives Whitney Rose and Heather Gay, whom she previously treated as beneath her. “We're seeing a similar arc of this sort of impenetrable, self-satisfied person suddenly becoming vulnerable, having a public shaming, having to pick up the pieces and make amends.”

Barlow denies being a schemer — “Deflecting is so 2020," she says. "I'm not in the cover-up game” — but either way, she’s delivering more iconic moments in the process. See: her crying between two of her arguing RHOSLC co-stars, declaring, “I’m an empath! I absorb it all!”

Shortly after we first speak, Barlow becomes embroiled in a new salacious conflict on RHOSLC, when Rose and her ex-friend Marks discuss rumors about Barlow that allege she performed sexual favors to help promote Vida Tequila, and, even more flagrantly, that she got NBA tickets out of it. “It's like the stupidest thing I've ever heard,” Barlow says when we talk again by phone three weeks later, adamantly denying both allegations. As for why someone might accuse her of, to quote cast mate Heather Gay, trading “blowies for Jazz tickets”? “I think some people were definitely triggered by the fact that my husband, son, me, and my other son can be front row of the Jazz anytime we want. I mean, we have a really good lifestyle. Sometimes that makes people upset and creates icky feelings inside them.”

When we hang up, all I can think about is about the moment weeks earlier when, after turning the recorder off at the end of our initial interview, Barlow casually asked me for feedback on how she was doing as a Housewife on the show. How was she portrayed this season? Should she be doing anything differently? Do I see her as she sees herself? After nervously plying her with a handful of compliments, I tell her she should keep pushing herself to be more vulnerable. She agrees, offering me a wry smile as she’s ushered off to her photo shoot, and back to her really good lifestyle.