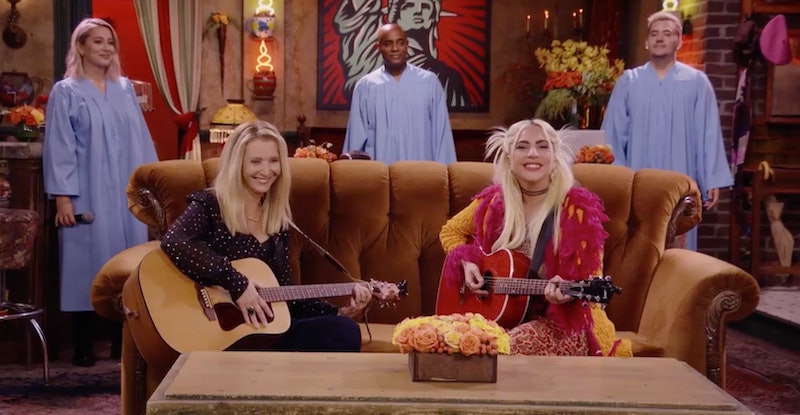 Nearly 25 years ago, “Smelly Cat” was born. Originally introduced in Friends Season 2 as one of Phoebe’s (Lisa Kudrow) least popular songs, it quickly became the show’s most iconic tune, right behind “I’ll Be There For You.” Naturally, it made a return in HBO Max’s Friends: The Reunion, which brought together stars Kudrow, Jennifer Aniston, Courteney Cox, Matt LeBlanc, Matthew Perry, and David Schwimmer to the original Stage 24. Lisa Kudrow’s “Smelly Cat” duet with Lady Gaga was a true tribute to how cemented in pop culture the song has become.

“Don’t get too excited, I haven’t done this in a long time,” Kudrow says as she settles into The Central Perk couch. “I should be Phoebe for this,” she muses, and then immediately switches to her in-character persona.

When Kudrow sings, “You may not be a bed of roses / and you’re no friend of those with noses,” the door to the coffee shop suddenly swings open and Lady Gaga walks in, dressed, of course, in bright and gaudy ‘90s fashion. “It’s so weird because I was walking down the street and I just happened to have my —” Lady Gaga says, gesturing at her guitar. “Need some help?” she asks. “You mind if I take ‘Smelly Cat’ for a spin?”

Lady Gaga ends up belting the song out, to Kudrow’s delight. “That’s not bad,” Kudrow says with a laugh. Their duet turns into a crooning ballad, and to top it all off a group of gospel singers burst in to provide some backup. Kudrow thanks everyone at the end, and then humorously mutters, “I still think it’s better when it’s just me.”

“It is,” Lady Gaga responds with a laugh. “But can I just say something?” She thanks Kudrow for being “the different one” on the show — the one who was willing to just be herself. Kudrow then returns the favor, adding that Lady Gaga “carried it along” after Phoebe with her own eclectic performances.

As director and producer Ben Winston told Variety, both he and Kudrow wanted Lady Gaga to appear in the special. “We went through a few names, and we both agreed that Gaga, if we could get her, would be the ultimate one because she associates with and feels close to Phoebe in so many ways, as Gaga says on the show,” Winston said. “That was a really beautiful moment. And Lady Gaga jumped at the chance to do it.”

Despite being a short ditty, “Smelly Cat” has lived long in the public imagination. The lyrics were written by Season 2 writer Betsy Borns, who wrote “The One With The Baby On The Bus,” the episode where the song first appears. (In a Larry King Interview, Kudrow said she came up with the tune.) To refresh your memory, in the episode the owner of The Central Perk, Terry, tells Phoebe that she’s been replaced by a professional musician, leaving her with nowhere to perform. After singing hate songs outside the cafe, Phoebe eventually agrees to teach “Smelly Cat” to her replacement, Stephanie.

Borns drew from her own life when coming up with that episode. Borns told Refinery29 her sister’s name is Stephanie, and she “had a really stinky, smelly dog” named Gouda. “He smelled like bad cheese,” she explained. While she originally wrote the song to feature a dog, she ended up changing the lyrics later because “it was determined that ‘cat’ was funnier!” And so “Smelly Cat” was born.