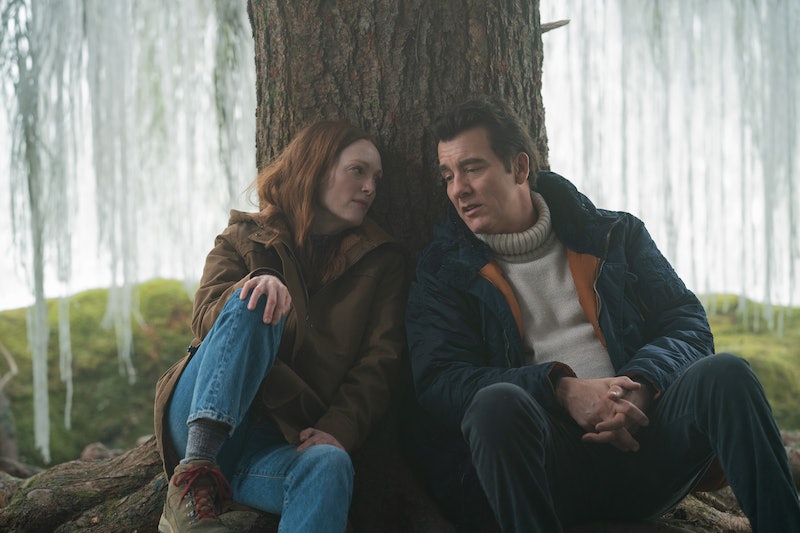 With Stephen King’s 2006 novel finally adapted for the screen, Constant Readers (those are King fans, for the uninitiated) are revisiting Lisey’s Story to refresh their memories of Lisey, Scott, and Boo’ya Moon. Whether you’ve read Lisey’s Story before, and are simply struggling to recall how it ends, or are going into the newly-released Apple TV+ miniseries fresh, we’ve got all the details you’re dying to know below. Major spoilers for Lisey’s Story follow.

It’s no secret that many of Stephen King’s novels, such as Pet Sematary and IT, draw from the author’s real-life experiences in Maine, but Lisey’s Story gets far more personal than King’s other books. Four years after he was involved in his infamous, near-fatal accident, King was hospitalized again, this time for pneumonia arising from his previously punctured lung. Upon returning home, King found that his wife, fellow novelist Tabitha King, had begun to redecorate his study. He recalled the incident in a recent interview with Apple TV+, included in new editions of Lisey’s Story:

“When I came home from the hospital, my wife had cleaned out my study completely.... All the books were gone; the magazines, the mementos, the plaques, the photographs on the wall, the pictures, everything was gone.... I was still pretty sick and taking a lot of medication to knock down my fever, and really only halfway in my right mind, and I thought to myself, I’ve died. I’m a ghost. I really, for a minute, thought that; I’m haunting my old study, and this is what it looks like. The idea for Lisey’s Story came from that and from wondering how my wife would act without me.”

Lisey’s Story also draws on the couple’s experiences with unstable fans. In 1991, a man broke into the authors’ Bangor, Maine home and confronted Tabitha with a fake explosive device, claiming that her husband had stolen his aunt’s life story to write Misery. Another man harassed them in 1992, claiming that Stephen King killed John Lennon. Years later, in 2003, a man bothered the couple with requests to speak to Stephen King about matters “concerning national security.”

Leaning heavily on these incidents, Lisey’s Story follows Lisey Landon, the widow of multi-award-winning novelist Scott Landon, as she wrestles with her grief. Married for 25 years, Lisey and Scott shared a personal vocabulary that shows up frequently in Lisey’s Story. The “Incunks” — short for incuncabilla — are academics who want Scott’s widow to give up the handling of his estate, for instance, and the “bad-gunky” is the violent mental illness that affected Scott’s father and brother. Then there are the “Deep Space Cowboys,” or dangerous fans, one of whom once shot Scott at an event in Tennessee — only to be stopped by Lisey, who struck him over the head with a shovel.

Finally, there’s Boo’ya Moon: the fantasy dimension Scott discovered as a child, where all is good in the light of day, but turns murderous come sundown. A key feature of Boo’ya Moon is the Fairy Forest, where the frightening, maddening creatures known as “laughers” dwell, and also where the pool — where Scott goes for healing and creative inspiration — lies. This foreign world is also home to the “long boy,” aka the thing with the piebald side, aka Ole Freddy — an all-consuming eldritch abomination that haunts anyone who looks upon it and lives to tell the tale.

These threads from Scott’s life converge for Lisey two years after his death. When Lisey’s sister, Amanda, harms herself and slips into a catatonic state, she relays what seems to be a message from Scott, telling Lisey — in Scott’s voice — that her husband has left her a “bool hunt.” Another word from Scott’s personal vocabulary, a “bool” can be a funny prank, a cosmic gift, or the key that unlocks a greater mystery. Lisey’s pursuit of Scott’s final bool leads her to confront repressed memories of her husband, his life, and Boo’ya Moon.

Lisey’s mourning process is complicated by Joseph Woodbody, a professor at the University of Pittsburgh, who harangues her to hand over Scott’s papers, including his unpublished manuscripts. When she resists, Woodbody — the so-called King of the Incunks — persuades an unstable and highly suggestible man named Jim Dooley — the Black Prince of the Incunks — to put more pressure on Lisey by stalking and threatening her. As Dooley’s harassment escalates, he assaults Lisey, whose uncovered memories of Scott and Boo’ya Moon lead her to plan a rescue mission for Amanda... and a grisly solution to her Incunk problem.

Amanda’s catatonia has trapped her in Boo’ya Moon, where she’s enraptured by the Hollyhocks: a great pirate ship she dreamt of sailing as a child. Lisey ventures there to save her, and learns that she’s not the first to do so: Scott rescued Amanda from Boo’ya Moon during one of her previous mental health crises, but never told Lisey about it. As it turns out, the symptoms of Amanda’s mental illness — catatonia and self-harm — match those Scott saw in his own family members.

Scott learned from his father that the Landon family’s mental illness manifested in two types, turning them into either gomers or folks with the bad-gunky. Gomers became catatonic, while the bad-gunky inspired a homicidal drive — and self-harm was the only way to alleviate its symptoms. Anyone who had the bad-gunky and didn’t hurt themselves would get “the real bad-gunky”: an incurable disease that transformed them into a feral creature bent on murder.

Lisey knows that Scott’s father, Sparky, had the bad-gunky, but she only remembers mid-way through the novel how Paul, her husband’s beloved older brother, died. Paul, she recalls, also had the condition. Sparky knew to cut Paul and himself to keep them from turning feral, but one day his son got the real bad-gunky and tried to kill Scott. In response, Sparky and Scott chained Paul up in the basement, waiting to see if he would improve — and if they could find a way to cure him.

Although Scott had cured his brother’s injuries before by taking him to the pool in Boo’ya Moon, he was unable to take Paul with him once he’d gone bad-gunky. Scott’s inability to save his brother left the boys’ father no choice. Three weeks after Paul turned feral, Sparky Landon killed him with his .30-06. In death, Paul — who had transformed into a beast that nearly broke itself to kill its own family — changed back into his old self. From the novel:

“For a moment or two longer he hangs from the circle of his father’s arm like a ragdoll or a puppet whose strings have been cut, then Landon slowly lowers him down and Scott knows his father is seeing what Scott wanted him to see: just a boy. Just an innocent boy who has been chained in the cellar by his lunatic father and dogsbody younger brother, then starved until he’s rack-thin and covered with sores; a boy who has struggled so pitifully hard for his freedom that he actually moved the steel post and the cruelly heavy table to which he has been chained. A boy who has lived three nightmare weeks as a prisoner down here before finally being shot in the head.”

Because Paul no longer looked like a monster, Scott had to get rid of the body. He dug a grave in Boo’ya Moon with a plastic sandbox shovel and buried Paul in it, marking it with a piece of wood painted with the dead boy’s paint-by-numbers kit.

Lisey pointedly avoids thinking about Scott’s death until late in the novel, when she remembers visiting him in the hospital in the last moments of his life. After collapsing during an out-of-state reading he attended alone, Scott was admitted to the local hospital with a high fever, breathing problems, and a suspected case of avian flu — or worse. Lisey begged her husband to go to Boo’ya Moon to heal himself in the pool, but he had already tried and failed to do so. The long boy was lying across the path to the pool, and Scott had no hope of fighting it or skirting around it. He died with Lisey by his side, killed by an illness that, both of them were certain, came from Boo’ya Moon.

Emerging from the painful memory with dry eyes, Lisey knows she’s just reached a turning point in her grief. There’s still the matter of the Deep Space Cowboy, Jim Dooley, however. Lisey and Amanda hatch a plan to trap Dooley and end his harassment campaign, once and for all.

After luring him to her, Lisey drags Dooley into Boo’ya Moon and forces him to chase her through the darkened Fairy Forest, where the fearsome laughers dwell. In their final confrontation, Lisey hits Dooley with a silver spade, only to realize that the commotion has awoken Boo’ya Moon’s most powerful denizen. From the novel:

“Then there’s movement from her right, not far from where Dooley is thrashing about and trying to haul himself upward. It is vast movement. For a moment the dark and fearsomely sad thoughts which inhabit her mind grow even sadder and darker; Lisey thinks they will either kill her or drive her insane. Then they shift in a slightly different direction, and as they do, the thing over there just beyond the trees also shifts. There’s the complicated sound of breaking foliage, the snapping and tearing of trees and underbrush. Then, and suddenly, it’s there. Scott’s long boy.”

And she does return. After entrusting Scott’s papers to the University of Maine, Lisey goes back to Boo’ya Moon to finish the bool hunt. There, she finds a manuscript box with her name on it and begins to read Scott’s final secret, the one he never told her: the full story of how he killed his father.

After Paul’s death, the bad-gunky grabbed hold of Sparky more and more often, but he resisted it as best he could, both through self-harm and sheer force of will. Realizing he was fighting a losing battle, Sparky made Scott promise to run away to Pittsburgh with the family’s life savings and start a new life for himself there, at the age of 10.

Wielding a pickaxe, Sparky made an attempt on Scott’s life — an attempt that failed only because the boy escaped to Boo’ya Moon in the nick of time. He later found his father passed out on the couch and a note on the pickaxe: “KILL ME. THEN PUT ME WITH PAUL. PLEASE.” Scott hesitated, unsure whether he should kill his father or leave him to be locked up, inevitably, in an asylum, but he prayed to Paul in Boo’ya Moon and made his decision. From the novel:

Content in learning the secret her husband bore for all their long years together, Lisey returns to Scott’s office with the “african”: an afghan to keep her from drifting back into Boo’ya Moon at the behest of the long boy. The novel closes as Lisey leaves Scott’s office and says her goodbyes to whatever spirits may inhabit it.