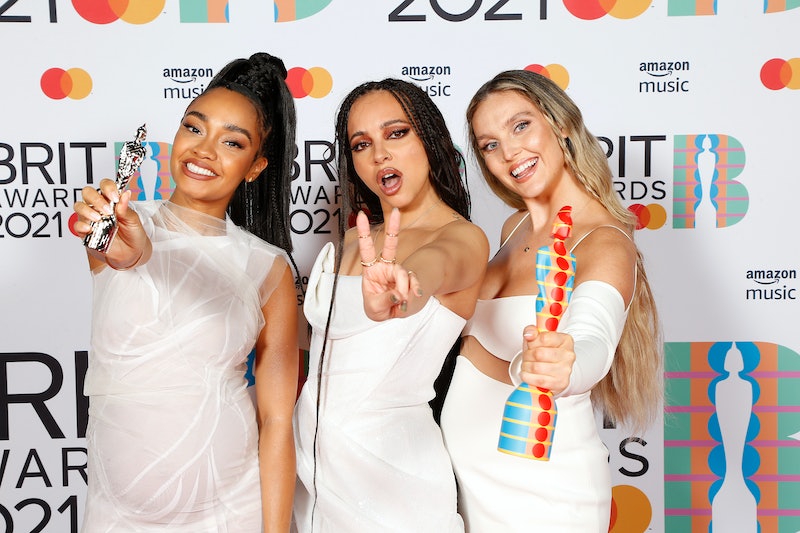 What a year Little Mix has had. Between losing a band member and gaining two new Mixers – Leigh-Anne Pinnock and Perrie Edwards announced their pregnancies within a week of each other– the girl group has proven than 10 years on, they are as brilliant as ever. At the 2021 BRIT Awards, they made history, too, by taking home the British Group Award, calling out the sexism and racism in the British pop industry.

In their touching speech, they paid tribute to the former bandmate, their management team, and an extra special shout out to “all of the incredible, incredible female bands” that came before them. Little Mix won against Bicep, Biffy Clyro, The 1975, and Young T & Bugsey.

“Two of us have baby brains, so we had to write it down,” explained Edwards of their acceptance speech. "It's not easy being a female in the U.K. pop industry," started Pinnock. "We've seen white male dominance, misogyny, sexism and lack of diversity. We're proud of how we've stuck together, stood our ground, surrounded ourselves with strong women, and are now using our voices more than ever."

Thirlwall added: "The fact that a girl band has never won this award really does speak volumes, so this award isn't just for us, it's for the Spice Girls, Sugababes, All Saints, Girls Aloud, all of the incredible female bands. This one's for you!"

The Spice Girls responded in kind, tweeting to congratulate them and adding “Doing it for the Girls!!” Jesy Nelson also joined in the virtual congratulations via her Instagram stories, sharing a picture of her former bandmates holding their award with five red heart emojis and three clapping hands emojis.

Taylor Swift also made history at the 2021 BRITs when she received the Global Icon Award – the first female artist to do so, per NME. She follows in the footsteps of past winners including David Bowie, Elton John, and Robbie Williams.