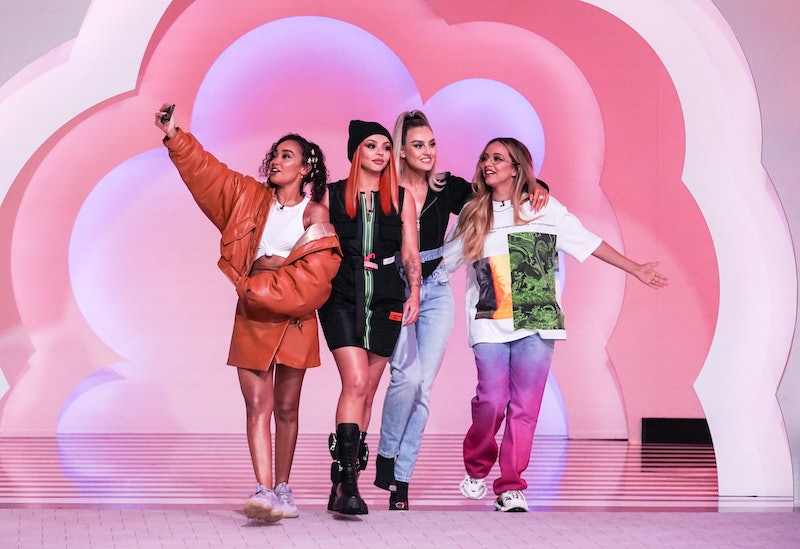 Little Mix's new talent show has already been a huge hit with fans but sadly, on Oct. 14, the BBC announced that Little Mix The Search would have to be postponed due to a COVID-19 outbreak among those involved. The BBC said in order to keep every member of the team safe they’d have to put a pause on the competition for a few weeks. The show will be returning this Saturday, Oct. 24, however it has now been confirmed that band member Jade Thirlwall will miss the first live show because she has to self isolate.

On Oct. 14, in a statement shared on the show's official Twitter page, the production team wrote: “Due to the format of the show we have made the decision to postpone Saturday’s [Oct. 17] programme. There are rigorous protocols in place to manage Covid-19 as the safety of all those involved in the production is paramount.”

They confirmed that the people involved are now self isolating. And while Sky initially reported that did not include any of the Little Mix girls, a statement released on Oct. 21 confirmed otherwise.

“Jade has to self-isolate this week and will therefore be carrying out her role as Mentor on Little Mix The Search from home,” it read. “For this Saturday’s show, Jade will participate via video link, continuing to mentor alongside Jesy, Leigh-Anne and Perrie.”

It has not been made clear whether Thirlwall has tested positive for the virus, or if she has just come into contact with someone who has, and therefore needs to isolate as a precautionary measure.

Prior to the filming pause, the last few weeks of The Search had seen different groups battling it out to go on tour with Little Mix in 2021. Every episode thus far had been pre-recorded around February, but Oct. 17 would have been the first live show. The contestants have been living together and getting training from coaches.

The first live show will air this Saturday, Oct. 24. Between this and the new series of Strictly Come Dancing, it promises to be a big night in TV.