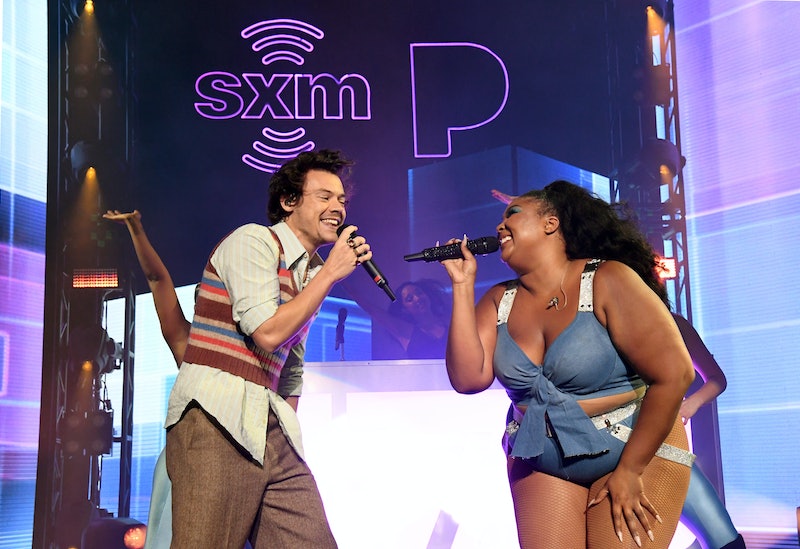 One week after his surprise Shania Twain duet, Harry Styles felt like another woman should join him at Coachella 2022: Lizzo. After first performing Gloria Gaynor’s “I Will Survive,” the duo launched into a rendition of One Direction’s 2011 hit “What Makes You Beautiful” for the Indio, California, music festival’s second weekend on Friday, April 22. The pièce de résistance? Styles and Lizzo even wore matching over-the-top costumes, complete with pink feathered Gucci coats.

After first stating how “proud” she was of Styles in the caption of a Coachella Instagram selfie, Lizzo’s post-show message to her friend on April 23 was even more heartfelt. Posting a clip of their rendition of “I Will Survive,” she called Styles a “treasure” and “gods [sic] gift to rock n roll,” noting that “the light that comes from him is real and infinite.” She also added that her pal “makes being on stage in front of hundreds n thousands easy” and even gave fans hope for a possible encore. “Thank you H, like u said ‘until next time’,” she concluded.

Though her appearance was unannounced, Lizzo had fans buzzing earlier in the day about the possibility that she could join the “Watermelon Sugar” singer on stage. “I’m bored otw to Coachella,” Lizzo captioned a TikTok post, featuring her new single, “About Damn Time.”

Styles and Lizzo’s friendship reportedly dates back to when the former One Direction member performed a “Juice” cover in the BBC Radio 1 Live Lounge in December 2019. Weeks later, Styles joined Lizzo to perform the song again at her January 2020 Super Bowl concert in Miami Beach. Later, Lizzo even paid homage back to her friend, covering his “Adore You” track during her own BBC1 session the following month.

“My favorite British import would be Harry Styles,” Lizzo said while chatting with fans at the BBC Radio 1 Live Lounge. “I’ve been listening to the entire album, Fine Line is my jam. I listen to it in the morning, on the plane, so I already sing the songs, and now I get to do it with a live band my way.”

Meanwhile, Styles called Lizzo “amazing” during a February 2020 Today show interview, hinting at a possible future collaboration. “I think she’s such a great artist,” he added. “I think, as a fan, what you want an artist to be is themself [sic], and I think she’s someone who’s just herself and she makes amazing music. It’s really feel-good and I think that’s what people need right now. I think she’s great.”

Making things even cuter, Lizzo supported her friend when he performed in Los Angeles on Nov. 19, 2021, and she wore a Harry Styles shirt to do it — one that also happened to feature her. “Harry Styles was incredible & so was my outfit,” she wrote on Instagram when she shared a photo. She also adorably tweeted with joy after he threw her a sunflower from the stage.

Their performance — and sweet friendship — seemed to be just what the people needed at Coachella, too.