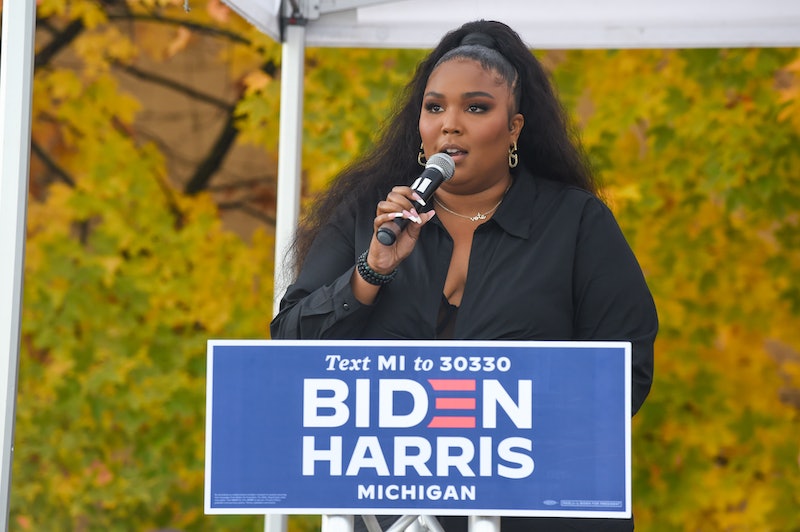 Following Joe Biden and Kamala Harris' decisive victory, Lizzo posted a response to the 2020 election results on Instagram on Saturday, Nov. 7, including an emotional video. The "Truth Hurts" singer discussed the last four years and what she hopes is ahead for the country. "It’s time to hold the people in charge accountable," she wrote in the caption. "It’s time for them to listen. And it’s time for actual change in our policies and practices."

During the four-minute video, Lizzo initially expressed grief about the legacy of the Trump administration and all the people who've lost their lives and livelihoods amid the pandemic. "I felt so unseen and neglected," she said. "Whether you're blue or red, that man didn't care about you."

On Saturday, vote totals showed Biden and Harris had won the election, after several tense days of round-the-clock counting, and many celebrities took to social media to celebrate the news. Lizzo spoke out about the victory in her Instagram video, acknowledging the difficult path ahead and sharing a few hopeful thoughts about the future. The singer first noted the historic nature of Harris' vice presidency as the senator will be the first woman and first woman of color to hold the position. "I'm so excited to see a Black woman in the White House, a brown woman in the White House, an Indian American woman in the White House," Lizzo said. "I'm so ready to see if America can hold itself accountable."

The Cuz I Love You singer went on to share her concerns about the country's future, saying, "This white supremacy that runs rampant cannot be tolerated anymore." She encouraged followers to stay engaged and added, "This is not the end. This is literally the beginning of progress and holding these people accountable."

While Lizzo initially struck a somber note following Biden's win, the singer did share a funnier take on Trump's defeat, as well. On Saturday, Lizzo posted a video riding off on a jet ski and laughing, writing "BYE B*TCH 2020."

On Election Day, Nov. 3, Lizzo had urged fans to vote via Instagram, sharing a red, white, and blue outfit and explaining her vision for the country. The singer wrote that, despite the country's history of violence, propaganda, racial injustice, and war, the young people who are committed to fighting these injustices and older people who have rejected prejudice all along give her hope. The star added a list of things she believes in, including a country that teaches true history, doesn't punish protesters, believes in the restoration of land, and is characterized by fairness and equity.

"I believe in so much, and if I believe it one day I can see it," Lizzo wrote. "It may not be tomorrow it may not be today, but it will be one day if we stay activated."

And so the fight for actual change continues.