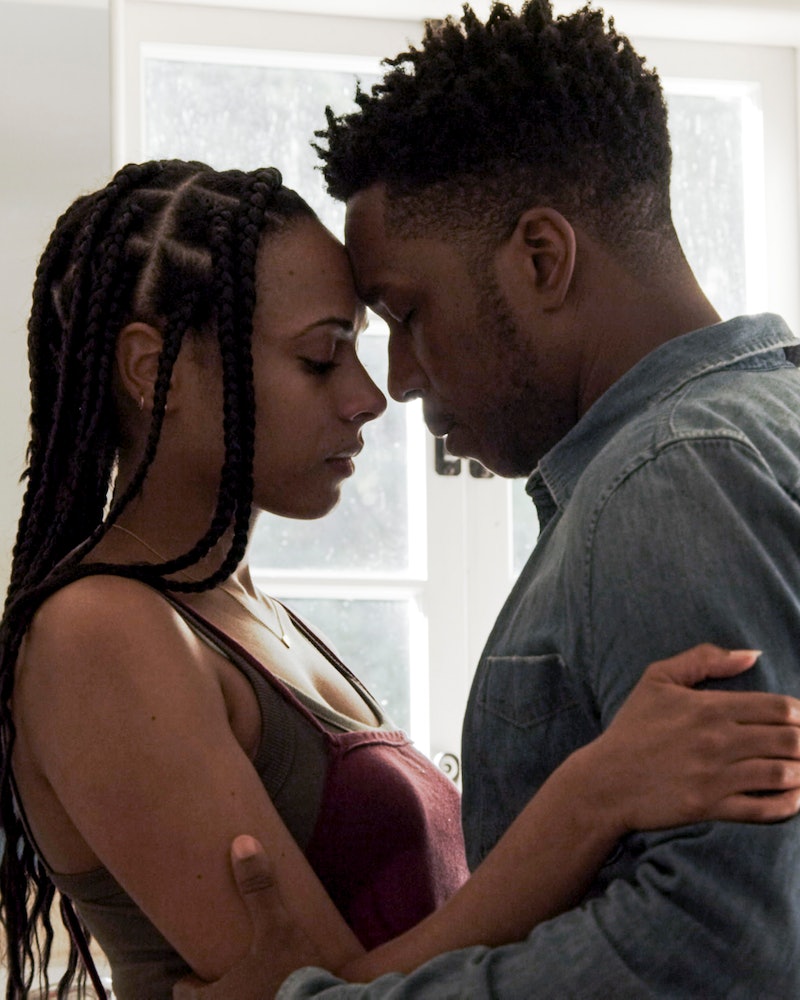 While most television productions had to be shut down when coronavirus pandemic hit America, Freeform got creative. According to a press release, the network worked with a handful of actors to film a socially distanced four-episode show called Love in the Time of Corona. The production took place in the actors' respective homes and was filmed using remote technology. As a result, several of the roles in the Love in the Time of Corona cast are played by the people who were already around — the actors' real husbands and wives and children.

Though the series is fictional, its storylines feel very real and relevant to the struggles many people are facing in the pandemic. How do couples who were used to having their alone time deal with suddenly being together 24/7? How do single people still try to meet and date new people? All of those questions and more are addressed in the series, which airs over two nights on Aug. 22 and 23.

"This is the perfect show for a generation who is learning to love and be loved in a time when the entire world is telling them to stay six feet apart," Lauren Corrao, executive vice president of Programming and Development at Freeform said in a press release. Creator and executive producer Joanna Johnson added, "Love is a basic and central need. Finding it in the time of Corona may pose unique challenges, but it won't stop us from forging great love stories, inspiring grand romantic gestures and profound acts of kindness."

Here's who makes up the cast of this unique series.

Leslie Odom Jr. and his real life wife Nicolette Robinson play married couple James and Sade in the series. In a more regular time, James travels a lot for work. But now that they're stuck at home for an indefinite amount of time, James is ready to expand their family,

Outside of this series, you probably know Odom Jr. for playing Aaron Burr in Hamilton. He's also been in Smash and Law & Order and voices Owen Tillerman in Central Park.

Robinson stars alongside her husband of eight years as Sade. While James travels for work, Sade is a stay-at-home mom to their young daughter. Suddenly having all this time together with her husband forces her to re-evaluate the marriage.

Like Odom Jr., Robinson is a Broadway actor, and the two actually met on the stage of Once On This Island. She also starred as Jane on The Affair for four years.

Dorfman plays Oscar, a single, nonbinary stylist who goes on some Zoom dates.

Qualley plays Oscar's roommate Elle, an aspiring musician. As quarantine wages on, she starts to develop a crush on her hot neighbor.

As the daughter of actor Andie MacDowell, Qualley knows this business inside and out. She's been acting for years, appearing in high-profile projects like Mad Men and Ocean's 8. She's also a singer who performs under her stage name Rainsford.

Gil Bellows' whole family got involved in this show. Bellows plays Paul, who recently separated from his wife Sarah (played by Bellows' real wife Rya Kihlstedt). The two are stuck quarantining together when their daughter Sophie (played by Bellows' and Kihlstedt's daughter Ava Bellows) comes home from college, and they have to pretend that their relationship is fine.

Bellows has had a lot of memorable roles in his career, including playing Billy Thomas on Ally McBeal and Tommy in The Shawshank Redemption.

Sarah and Paul may be separated, but Gil Bellows and his real life wife Rya Kihlstedt are going strong. The duo married in 1994 and have two children together. Outside of Love in the Time of Corona, Kihlstedt can be seen in The Bold Type, the Charmed reboot, Heroes Reborn, Nashville, Dexter, and more.

Gil Bellows and Rya Kihlstedt's 21-year-old daughter Ava plays Sarah, who recently went through a breakup. Her parents decide she can't handle the truth about their own separation now, so they pretend they're still together for her sake. This is Ava's second-ever acting role. She previously appeared in the short film & This Too Shall Pass.

Nanda is getting ready to celebrate her 50th wedding anniversary, but she's told that her husband can't come home from rehab due to new coronavirus precautions.

Actor L. Scott Caldwell is probably best known for playing Rose on Lost, but she's also been in Chilling Adventures of Sabrina, A Million Little Things, How to Get Away with Murder, and more.