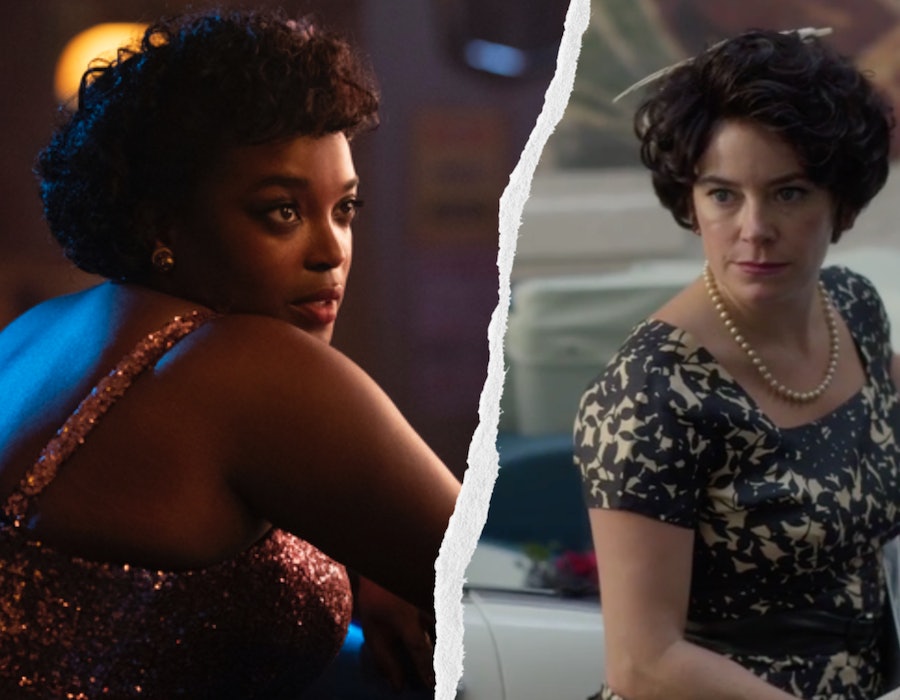 Spoilers ahead for Lovecraft Country Episode 5. In the final few minutes of Episode 5 of Lovecraft Country, Ruby raises her fist and plunges her stiletto deep into a man's anus. The victim: her former boss, a seemingly wholesome man who, behind closed doors, tried to sexually assault their only Black employee. This is Ruby uninterrupted, and as the flesh of a white woman sloughs off of her body, she stomps away fully embodied by her rage.

It's a strikingly brutal scene made possible by a magic potion that antagonist Christina (Abbey Lee Kershaw) gives Ruby, granting her the freedom to change her appearance into the white "Hillary" (Jamie Neumann) for a limited time. In return, Christina enlists Ruby's help to take down another member of the Order of the Ancient Dawn (it's implied that he killed the original William, who Christina has since been posing as using the same potion). This puts Ruby smack in the crosshairs of the racist cult, despite the fact that she "would prefer not to f*ck with these magicians," Lovecraft Country star Wunmi Mosaku tells Bustle with a laugh.

But Ruby, a bold and unapologetic character constantly fighting to be acknowledged, feels so confined by Jim Crow-era America that resorting to magic feels more practical than waiting for a more equitable society. "I don't think Ruby wants to be anyone other than Ruby," Mosaku explains. "It's like what she says: 'It's the world that's interrupting me.' Being Black isn't the problem. Being a woman isn't the problem. Being 5-foot-9 and curvy isn't the problem. [But] you guys over there, you keep stepping in my way."

Throughout the show, Ruby attempts to make a life for herself, but she's met with limitations at every turn. When she tries to live with her sister Leti (Jurnee Smollett), racist white neighbors antagonize them. Despite being overqualified for the job she so desperately wants at Marshall Field's, they hire a Black woman with no retail experience, and Ruby knows they'd never hire a second. And when she does finally get a job there — only as Hillary — she witnesses the dehumanizing ways her white coworkers talk about and treat their only Black peer. Finally, she snaps. She pretends to seduce her boss as Hillary, and once he's tied up, she attacks him.

And yet for Mosaku, being able to sit with that anger was freeing. She says people in the UK "really don't see [racism] as a thing that affects people's lives." As such, she's never felt comfortable speaking about race, even as her Blackness has defined so many aspects of her life. "It was fun exploring not being polite all the time. I've never felt afforded that grace," she says of Ruby.

Working on Lovecraft Country completely shifted Mosaku's perspective. "I am fundamentally changed because of playing Ruby in this show, and with these people," she says. Now, she realizes, "it doesn't serve me to silence myself."