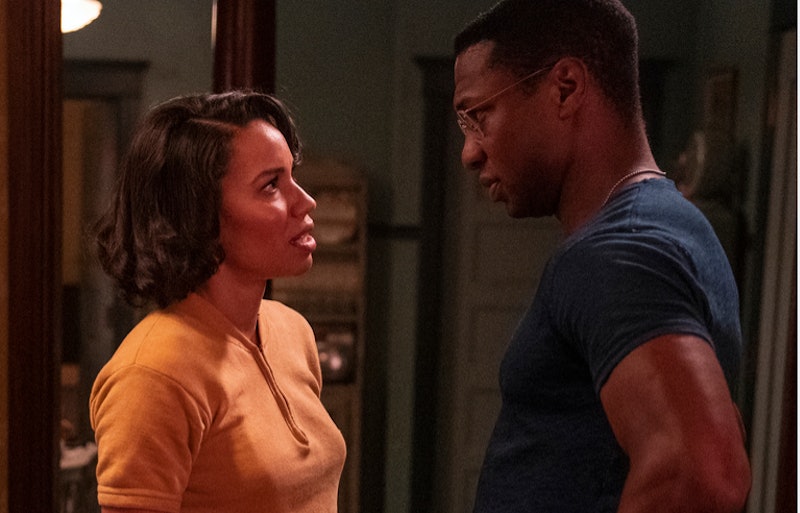 Spoilers ahead for Lovecraft Country Episode 9. The past becomes the present in Lovecraft Country Episode 9 as Tic, Leti, and Montrose travel to 1921. Arriving just as the Tulsa Race Massacre kicks off, the trio rushes to retrieve the Book of Names from Tic's family, unable to stop the atrocities happening around them because it would mean changing the future. Their anguish and fury is mirrored by the speech that plays at the end of the episode: a reading of Sonia Sanchez's galvanizing 1994 poem "Catch the Fire."

An esteemed award-winning poet, activist, and educator, Sanchez has a long history of inspiring audiences with her words. During the 1960s, she was considered one of the major voices in the Civil Rights, Women's Liberation, and Black Arts Movements (the artistic wing of the Black Power Movement). She was a member of the Congress of Racial Equality, met Malcolm X numerous times before his assassination in 1965, and serves as the focus of the 2015 documentary BaddDDD Sonia Sanchez. Today, young activists still turn to her words for encouragement.

"She's the connection to history that young poets don't have," artist Danny Simmons explained toThe New York Times at a 2005 spoken word performance for HBO's Def Poetry. "I think Sonia has the history of the Black struggle in the United States incorporated into her poetry. And her poetry makes sense of what's going on now."

In June, author Kwame Alexander told the Times that Sanchez's work, along with other Black Arts Movement poets like Haki Madhubuti and Nikki Giovanni, inspired him during the Black Lives Matter protests that broke out in the wake of George Floyd's death. "They creatively mirrored the unrest of the enraged masses who took to the streets during the ’60s and ’70s," he said. "Because they were politically galvanizing … because they reminded us of the beauty and goodness of being Black. All things we need in this moment."

The words of "Catch the Fire" particularly resonate with activists today, as it encourages them be aware of injustice (I say where is your fire? / Can’t you smell it coming out of our past?) while still living joyfully and lovingly as a form of rebellion (Hey. Brother/Brotha. Sister/Sista. / Here is my hand. / Catch the fire…and live. / live. / livelivelive.). It's an almost paradoxical poem that inspires both rage and hope, but it's meant to reflect what it's like to be Black and living in America.

Similarly, the ending of Lovecraft Country Episode 9 means Tic, Leti, and Montrose must watch their loved ones die in the past in order to save their loved ones in the present. It's a frustrating catch-22, and Sanchez's poem reinforces dueling feelings of anger and desire for change in both the protagonists and us as viewers. This is further compounded by the speech Montrose gives at the end. He names off real people who died in the Tulsa massacre, like Dr. A.C. Jackson, who was considered the "most able Negro surgeon in America" at the time, according to the Greenwood Cultural Center. He's unable to stop their deaths, but Sanchez's words seem to ask the viewer on a meta level: what can you do? What can you change?

It's an interesting way to connect directly to the audience, and Episode 9 encourages continued conversation about the Tulsa Race Massacre (which was long omitted from history books) and other tragedies. “Poetry is a bridge between history and truth," Sanchez told Style Weekly in 2016. "I want to make people see that we are just like everyone else and show what it is to have experiences as an African American. To know, as Martin Luther King said, that the arc of the moral universe is long, but it bends towards justice. We had to bend it sometimes through discipline, activism, love and joy."

More like this
Here’s What Happens To Bill & Frank In 'The Last Of Us' Video Game
By Brad Witter
The 'Gossip Girl' Reboot Creator Is “Looking For A New Home” To Air A Potential Season 3
By Brad Witter
The 8 Best Aidan Shaw Moments On 'Sex And The City'
By Grace Wehniainen
Bill & Frank’s 'The Last Of Us' Episode Has Twitter Emotionally Wrecked
By Alyssa Lapid
Get Even More From Bustle — Sign Up For The Newsletter
From hair trends to relationship advice, our daily newsletter has everything you need to sound like a person who’s on TikTok, even if you aren’t.