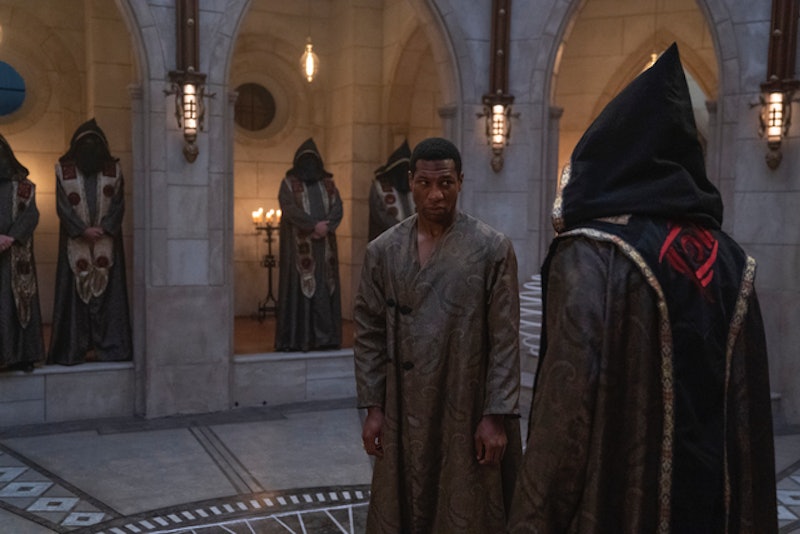 Magic, monsters, and ghosts abound in HBO's Lovecraft Country. Based on Matt Ruff's novel of the same name, the shows channels the monster-of-the-week vibes of X-Files but centers on a Black family rather than white FBI agents, following Atticus "Tic" Freeman as he teams up with his friend Leti Lewis and uncle George to track down his missing father, Montrose. By the end of the second episode, they've found him and returned to Chicago, but they're left to untangle the mystery of a secret, biblical order called the Sons of Adam. As such, Redditors have developed several theories about Lovecraft Country and what's in store for Tic, Leti, and Montrose.

Does Tic's Ancestor Have the Book of Names?

The last we saw of the trio, they'd barely made it out of Ardham alive. Though they managed to defeat Samuel Braithwhite and escape the Sons of Adam, George was killed and Samuel's daughter Christina fled. Having discovered that it was Christina who told Leti to buy the haunted Winthrop mansion in Episode 3, Tic has now realized that Christina is likely trying to kill them, too. She's also very eager to get her hands on Titus Braithwhite's book of names, which Tic's ancestor, Hanna, may have been carrying when she led Tic to safety as Samuel's mansion crumbled. She very obviously had a huge book in her hands, but is it it the book of names? Or is it possibly the Necronomicon — also known as the book of the dead in H.P. Lovecraft's works?

In the book, Christina is instead Caleb Braithwhite, the primary antagonist who torments Tic and his family after using Tic to defeat his father Samuel. There isn't a Caleb character in the show, but Reddit users have pointed out that William, Christina's "henchman," looks mysteriously like Christina's sibling. Christina and William never appear together, and when Tic asks if William is Christina's boyfriend, she cryptically says, "Yes, he is a boy and a friend, sometimes." It's a weird roundabout statement that they believe hints that William and Christina are actually one person, not siblings or lovers.

The reason for this theory again derives from the book: Caleb has a sort of polyjuice potion that he eventually gives to Leti's sister Ruby so she can experience the freedom of being a white woman. Since Christina is Caleb's show equivalent, is it possible she has the same potion, and is just using it on herself to become William and move more freely in the sexist 1950s?

There's More to Montrose Than Meets The Eye

Tic's father, Montrose, is clearly traumatized by his experiences with his abusive father: he's cold with his son and frequently misuses alcohol. Some theorize that there's more to Montrose than that, though. One Reddit user found it strange that we didn't see how Montrose found (or created) the tunnel in the tower he was being kept in, or how he managed to appear perfectly where Tic, Leti, and George were waiting for him. While others point out it may just be poor editing, the theory does speak to an overall uneasy feeling about Montrose. What really happened to him while Samuel and Christina kept him imprisoned? Is he the same Montrose that Tic and George once knew, or has he come back a changed man, with possible supernatural knowledge or powers?

Though we've only seen a little of George's wife Hippolyta so far, we know that she was very in love with George and is now deeply unhappy that he's gone. In Episode 3, she found a mysterious orrery in the Winthrop mansion and took it back to the shop. The orrery doesn't correspond to any known solar system, so one Redditor postulates it's actually a tool to move back and forth through time. Some of the user's evidence could just be issues with editing continuity — Hippolyta asks Leti where Dee is twice, and the same kid walks past her store window twice — but they also point out that Hippolyta may have already time traveled. Tic knows that when Montrose and George were kids, they were once saved from a white mob by a mysterious figure with a bat, and the user theorizes that could have been Hippolyta time-hopping too far while trying to reverse George's death.

It's a wild theory, but it actually has some roots in Ruff's novel. In the chapter "Hippolyta Disturbs the Universe," she uses the orrery to open a portal to another world. Is it possible in the HBo adaptation that this will change to time travel? George's actor Courtney B. Vance is credited on IMDb for seven episodes, after all.

In Episode 2, Tic literally wrestled with a vision of Ji-Ah (Jamie Chung), a mysterious woman he met during the Korean War. As a character unique to the show, it's unclear why Tic is haunted by her, but one Reddit user suggest that she's a gumiho, aka a fox creature from Korean lore that can live for thousands of years. The official description of Ji-Ah hints that she may be "more than what she seems," and could even be tied to a rash of soldier disappearances.

George technically already had a funeral, but the scene in which Hippolyta and Montrose discussed Bram Stoker's Dracula felt significant. Is it possible George could live again in a more paranormal form? It's not yet clear, but it seems like there's no kind of terror that Lovecraft Country is going to leave unexplored.