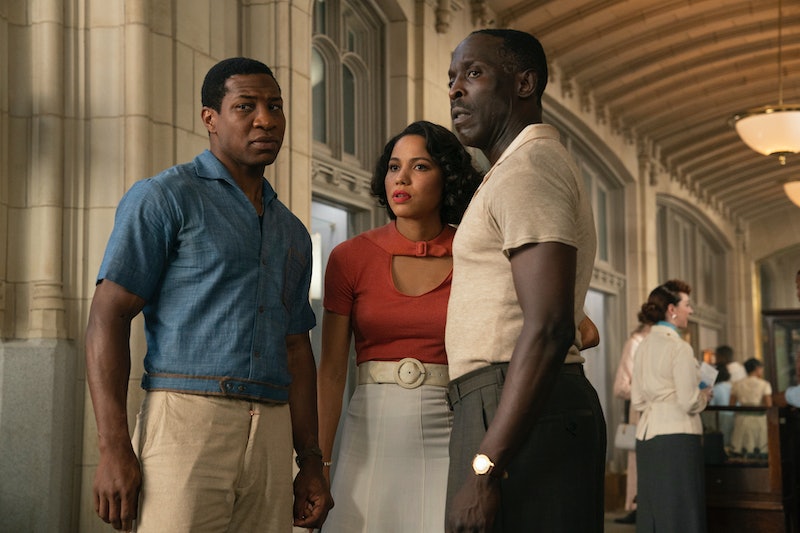 Spoilers ahead for Season 1, Episode 4 of Lovecraft Country. Lovecraft Country goes full Indiana Jones in Episode 4 as Tic, Leti, and Montrose brave a booby-trapped cave under a Boston museum in order to find Titus Braithwaite's vault. After bypassing several obstacles, they awaken Yahima, a mummified Indigenous person "of two spirits" who explains she can decipher Titus' lost pages (and thus help Tic learn magic to defeat Christina). But before she can even translate a single word, Montrose kills Yahima behind closed doors. This is the first episode that significantly features Montrose, and his actions raise a pressing question: is Montrose an antagonist secretly — or unknowingly — working for Christina's Sons of Adam, or is he just trying to protect his family?

According to Michael K. Williams, who plays Montrose, it's the latter. Not only does he burn the Order of the Ancient Dawn bylaws book that George passed on before he died, he also tries to prevent Tic from going to find Titus' vault in the first place. In his mind, if Tic just leaves Christina alone, their family may be able to avoid attracting further attention from the Order of the Ancient Dawn's other 34 lodges. "He is always protecting Tic in his own way," Williams tells Bustle. "He loves his son, [and will protect him] by any means necessary."

Still, their relationship is fraught and imperfect, with Montrose navigating his own personal traumas while trying to protect a son who no longer trusts his father's judgment. "I believe Montrose has a hard time with losing control over Tic," Williams continues. "All he really has is Tic, that's all he has to be responsible for ... and when Tic starts to take that away from him by becoming an adult, in Montrose's alcoholic mind, dare I say, that doesn't bode well for him."

As Williams points out, the issue is that Montrose's childhood was defined by his abusive father, and he struggles to convey his love for Tic in a way that doesn't replicate his own past experiences. "In [Montrose's] mind, he was beating the softness out of Tic so that no one would take advantage of him or hurt him," Williams says. "But in hindsight, he was the one who was hurting Tic the most."

All of that generational trauma comes to the fore in the quickly flooding caves, as Montrose continuously tries to rein Tic in while managing his own mounting fears — both for himself and for his son. At one point, Montrose tries to give Tic advice about Leti, explaining that "all that fussing" is really a sign of love; he says it in reference to Tic's mother, but it's easy to interpret it as Montrose talking about the way he cares for Tic, too.

In this way, Lovecraft Country delves much more significantly into Tic's family dynamics than the novel it's based on. In the book, it's Montrose, George, Tic, and a group of treasure hunters who go in search of Titus' book of names, which they then turn over to antagonist Caleb Braithwaite after he threatens their family. It's a mostly fun romp of a chapter for the men, but in HBO's adaptation, the journey is more about Tic and Montrose confronting their fractured relationship and lack of connection. (As Leti points out to Montrose after Tic storms off, both men are frustratingly closed off about their thoughts and feelings.)

In the end, Yahima's murder — an egregious plot point in an otherwise moving episode about family — is more about Montrose desperately trying to keep Tic off the Order of the Ancient Dawn's radar. As a Black man who grew up in a virulently racist country, he is well aware of the dangers of Tic going head-to-head with a white woman who is allied with not only the cops but a literal biblical cult of magical wizards. Deep down, he probably knows that Christina isn't going to stop antagonizing them even if they do act as amenable as possible. But Montrose's ultimate goal is to ensure that Tic is safe — even if that means doing distasteful things on his son's behalf. As Montrose himself tells Tic, "You grew to be a good man, in spite of me."