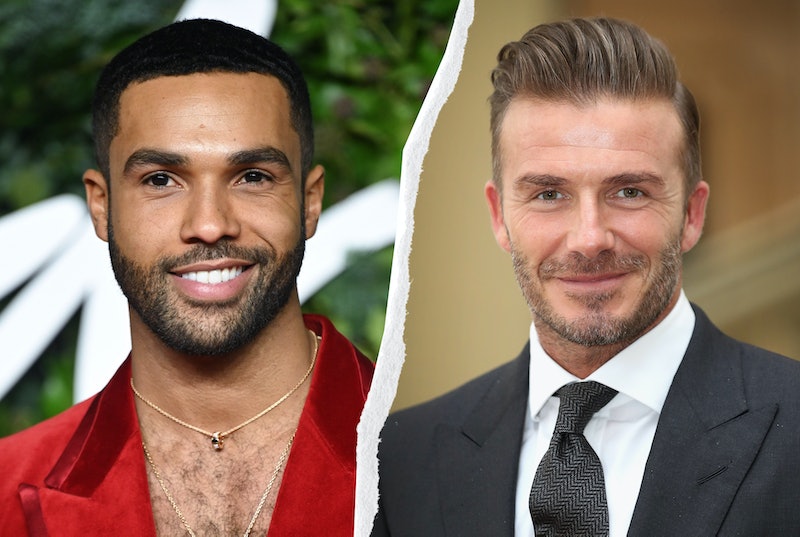 If you’ve already succumbed to an Emily In Paris season 2 watching session, then Emily’s latest conquest banker Alfie, played by soap-regular, Lucien Laviscount, may have become the subject of many or two Whatsapp chats and Twitter threads (or was that just me?). The 29-year-old former Coronation Street and Waterloo Road actor from Lancashire had an established career in the UK ahead of the Netflix series, and, as it turns out, a coincidental meeting with David Beckham helped kickstart Lucien Laviscount’s acting career as a child. Who knew?

Speaking to Grazia, Laviscount, who also starred in the film Snatch, revealed that he met the legendary former Manchester United footballer during an M&S photoshoot when he was just ten years old.

“I got a modelling campaign with Marks and Spencers because out the blue I got stopped in the street with my mum shopping in town,” Lucien explained to the magazine. He added: “And then the M&S job ended up being with David Beckham. I was a naughty little boy on set, and David comes over and he says "Lucien, you're a funny lad - you should get into acting".

According to Laviscount, the chance meeting lead to David Beckham helping enrol him in an acting school, kickstarting his career. “I really had no idea what acting was at that point,” said the actor, “And he gets an assistant to call an acting school in Manchester, and they got in touch with my mum. That's how I started, which is kind of wild.”

Beckham’s instincts were right, as the actor went on to have roles in Waterloo Road as a teenager, then later Coronation Street. Laviscount has also starred in Supernatural, Scream Queens, and soon upcoming horror film, The Bye Bye Man. Plus, who could forget his Celebrity Big Brother stint alongside Kerry Katona? Of course, the actor’s recent role as Alfie in Emily In Paris has started to turn heads.

Laviscount plays British banker, Alfie who enters Emily’s complicated love triangle, and provides some funny one-liners in the process, as he told Bustle: “Alfie opens up Emily's fun side, her dark side, her naughty side. And I think Alfie's a great escape from her work life, which she loves so much. But I think everyone needs an escape sometimes.”

More like this
David Beckham’s Controversial Qatar Deal Skyrocketed His Net Worth
By Catharina Cheung
Emily Atack’s Net Worth Would Make Charlotte Hinchcliffe Proud
By El Hunt
Parminder Nagra Definitely Relates To Her 'Maternal' Character
By Maxine Harrison
Maya Jama’s Net Worth Definitely Won’t Give You The Ick
By Sophie McEvoy
Get The Very Best Of Bustle/UK
Sign up for Bustle UK's twice-weekly newsletter, featuring the latest must-watch TV, moving personal stories, and expert advice on the hottest viral buys.