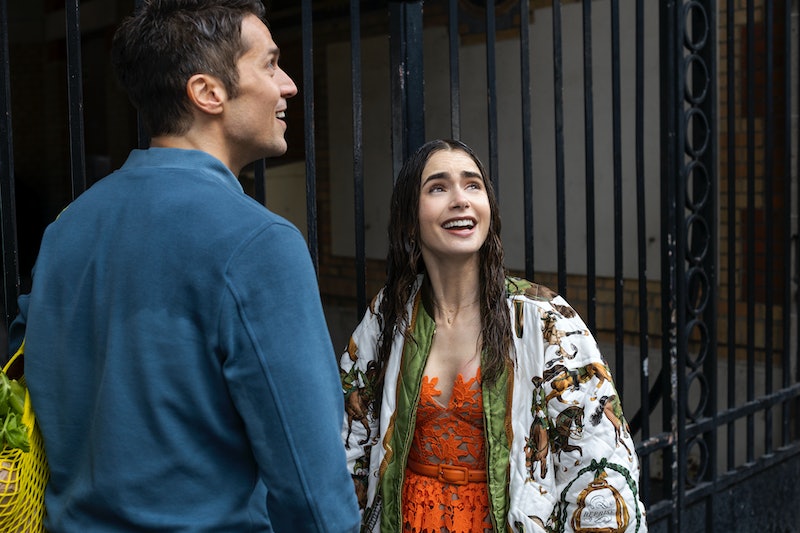 Deeply significant Emily in Paris spoilers ahead: The Season 2 finale of Emily in Paris leaves our plucky heroine with a series of conundrums befitting a game of MASH: Should Emily pursue long distance romance with London-bound Alfie, or finally make a play for Gabriel? Should she climb the next rung of the corporate ladder at Savoir, or join a marketing start-up headed by Sylvie? Is the point of living in Paris to work her way to a corner office in the Windy City, or to put down roots in La Ville Lumière (this time without the help of corporate housing)? In a way, every question can be boiled down to the same choice: Choose progress in the way Emily has always defined it since before she came to France, or follow her heart in directions that will upend her five-year plan.

When Emily’s American boss Madeline (Kate Walsh) shows up in Paris, her stereotypically loud, overly familiar presence functions like a mirror — it’s a reminder of Emily’s boorish and bubbly demeanor when she first landed in the city as an American abroad. But by Season 2, Emily has refined her personal sales pitch. “She's feeling more comfortable in her surroundings and with her coworkers, as well as with her new friends,” star Lily Collins tells Bustle. Emily has developed a flair for the French way of doing business, more centered on nurturing client relationships than enhancing the bottom line. “It's like Emily has read the room in her office. She's gotten the personalities. She knows how to get her point across without being too overly anything.”

What makes this season’s cliffhangers so juicy is that they pit old Emily against the version that she’s only just started exploring. That she’s at all considering leaving her firm is a personal revolution. Emily’s job is more than her reason for being in France; it’s her raison d'être. And she’s really good at it. The quality that makes Emily in Paris enjoyable on an episodic level is the same one that makes Emily a marketing whiz. The show’s writers set her up with a hard choice — give up Gabriel or give up Camille; please Pierre Cadault or his nemesis Gregory Elliott Dupree — and we watch on as she cobbles together — in her clumsy, well-intentioned fashion — some third way by which she can have it all.

In the season finale, Emily’s friend Mindy (Ashley Park) — herself a billboard for following one’s heart (though with a safety net, to be sure) — implores Emily to forget what she “should” do. “I don't know if she's ever been told that or given the option,” Collins tells Bustle, teasing out her character’s backstory, which has only ever been given the lightest excavation on-screen. “It's just been: What's the most practical and logical, and what’s going to move me forward? Even going to Paris was a way to get a promotion. It wasn't like Emily always wanted to go to Paris, you know?”

Ultimately, last season’s cliffhanger, in which Emily finally sleeps with Gabriel, didn’t change much. She’s not dating Gabriel, though the spark survives, and she’s somehow returned to this awkward ménage à trois with Gabriel and his on-again girlfriend, Camille. Actually, it’s a star-crossed foursome now, with Alfie — another improbably hot European — vying for Emily. With this many hearts involved, there’s no third way, no happy compromise. Someone will get hurt. And at work, the stakes are just as high. This isn’t a crisis for Emily to cleverly work around, but a stark choice: Madeline or Sylvie. No matter what happens, there will be repercussions.

“I think that's why the decision is so difficult for her,” says Collins. “But she's learning how to lead with her heart a little more. And sometimes that overlaps and sometimes it doesn't. But she's more open to risk-taking.” Beyond that, Collins either doesn’t know what Emily decides or isn’t saying: “I'm dying to know what she chooses.”

More like this
'The Crown' Season 6 Has Suspended Filming "Out Of Respect" For The Queen's Death
By Bustle Staff
'The Queen’s Gambit' Season 2 Tweet Wasn’t From Anya Taylor-Joy
By Mary Kate McGrath, Jack Irvin and Grace Wehniainen
Ashton Kutcher Wants Danny Masterson “To Be Found Innocent” In Rape Retrial
By Jake Viswanath
Here’s Everything Coming To & Leaving Netflix In February
By Jake Viswanath
Get Even More From Bustle — Sign Up For The Newsletter
From hair trends to relationship advice, our daily newsletter has everything you need to sound like a person who’s on TikTok, even if you aren’t.