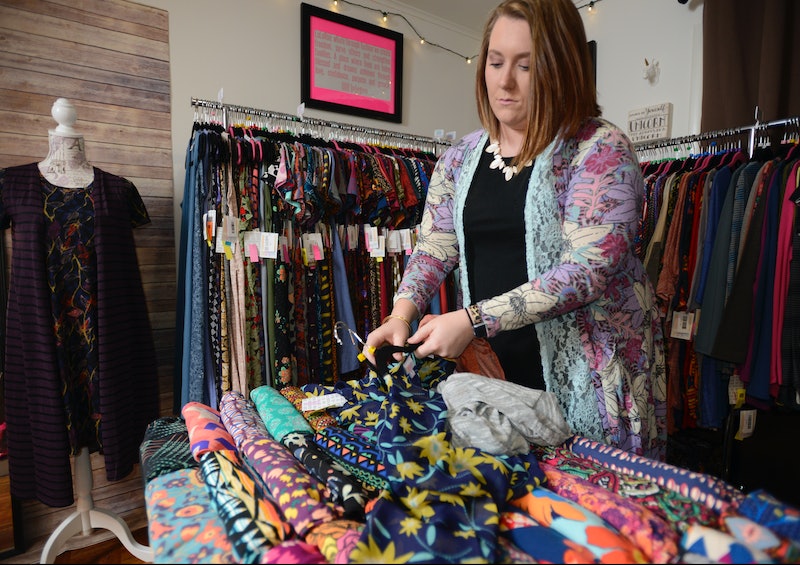 With the docuseries LuLaRich on Amazon Prime Video, the story of LuLaRoe — the multi-level marketing (MLM) business best known for selling colorful leggings on Facebook — comes into sharper focus. DeAnne Stidham grew the company from humble beginnings, driving around the Southwest selling her merchandise; over time, LuLaRoe grew into an MLM with tens of thousands of consultants shilling its clothing.

In the late 2010s, the saga culminated in a slew of lawsuits. LuLaRoe has faced allegations from its consultants, customers, a former supplier, and even a state government, with accusations ranging from faulty leggings to operating as a pyramid scheme. Some of the lawsuits are still playing out in court, others have been settled or dismissed, and still more are in arbitration. Below, a quick summary of the major legal battles waged by LuLaRoe and its co-founders, DeAnne and her husband Mark Stidham.

LuLaRoe’s former employees and consultants have sued the company.

LuLaRoe’s “consultants” — the people who sold the company’s clothing — have complained about the quality of the garments, the return policy, the work culture, and the lack of real financial opportunity. In multiple class-action lawsuits, consultants have sought millions of damages from LuLaRoe, alleging that they were sold defective products, that the company operates as a pyramid scheme, and more. Some of these suits have been voluntarily dismissed, while others are in arbitration, or still pending.

In Ponkey et al v. LLR, Inc. et al, one such case that was filed earlier this year, the plaintiffs take a strong stance against the company and its founders. “LuLaRoe was started by Mark Stidham and Deanne Brady (who essentially sit at the very top of the pyramid) in order to enrich themselves through a calculated endless chain scheme,” the suit reads. “Upon information and belief, Stidham and Brady have earned hundreds of millions of dollars in profit for themselves on the backs of women who were seeking a legitimate business opportunity where they could earn income while spending more time with their families.” (In the past, and in LuLaRich, the Stidhams have repeatedly denied claims that LuLaRoe operates as a pyramid scheme.)

Employees have also sued LuLaRoe. In one case, a former warehouse worked alleged that he experienced very racist behavior while on the job, which involved him being repeatedly called a racial slur and being discriminated against in the workplace. When he complained, the employee alleges, he was fired.

Customers have also sued the MLM.

The company has faced class-action lawsuits from customers, who complain of defective leggings. The first was filed in 2017, and alleged that LuLaRoe’s leggings ripped like “wet toilet paper.” Subsequently, several more lawsuits were filed over defective products, as well as the company’s refund policy — which allegedly prevented some customers from getting their money back after purchasing faulty clothing. Many of these class-action cases were consolidated into one, Tanya Mack v. LLR, Inc. et al., which was currently pending as of March 2021. (In a statement to Buzzfeed News, a LuLaRoe spokesperson responded to these customers’ claims, saying, “LuLaRoe stands behind the quality and craftsmanship of our apparel. Several years ago, during the height of our explosive growth, some product remained on loading docks for a short period prior to processing, but it was always covered and protected. All LuLaRoe products undergo stringent inspection and quality controls throughout the manufacturing and distribution process.”)

Customers have also filed suits alleging that LuLaRoe was improperly charging sales tax in certain situations. One of these (Webster v. LuLaRoe) has been dismissed, but others (Van v. LuLaRoe, Hill v. LuLaRoe) appear to still be pending.

As has their former supplier, in a $49 million lawsuit.

MyDyer (aka Providence Industries), the company’s onetime supplier, sued LuLaRoe in 2018 for $49 million in unpaid invoices, alleging that the Stidhams were using a group of shell companies to hide money and assets. MyDyer claims LuLaRoe’s payments began to falter in 2016. In 2018, Mark Stidham allegedly told the company, “Look guys, I am not going to pay you guys a f*cking dime unless the judge orders me to pay it, and DeAnne and I will take our two or three hundred million dollars to the Bahamas and f*ck everything.” The Stidhams deny this, and LuLaRoe has countersued MyDyer for $1 billion.

In 2018, the state of Washington filed a suit against LuLaRoe, claiming the company was running a pyramid scheme. Earlier this year, the company agreed to pay $4.75 million to settle the case. Some documents from the case were unsealed, contrary to the Stidhams’ wishes; these revealed that the Stidhams claimed not to know their salaries, that LuLaRoe appeared to have changed its consultant compensation plan to avoid scrutiny the FTC, and more.

Due to the settlement, about 3,000 Washington residents will receive checks because they “lost money, or who may have quit their job or sacrificed opportunities as a result of LuLaRoe’s deception, but who failed to make a ‘full-time’ income as LuLaRoe promised.” LuLaRoe will be subject to restrictions and regulations as it continues to operate in the state. In April, Truth in Advertising filed a complaint against LuLaRoe for violating these terms.

The Stidhams and LuLaRoe continue to deny any wrongdoing. In a press release announcing the settlement, Mark said, “Even though we believed we would win the case eventually — whether at trial or on a subsequent appeal — the expense would be enormous and the amount of time senior management would have had to devote to the litigation during the trial would have been a distraction from our business.”