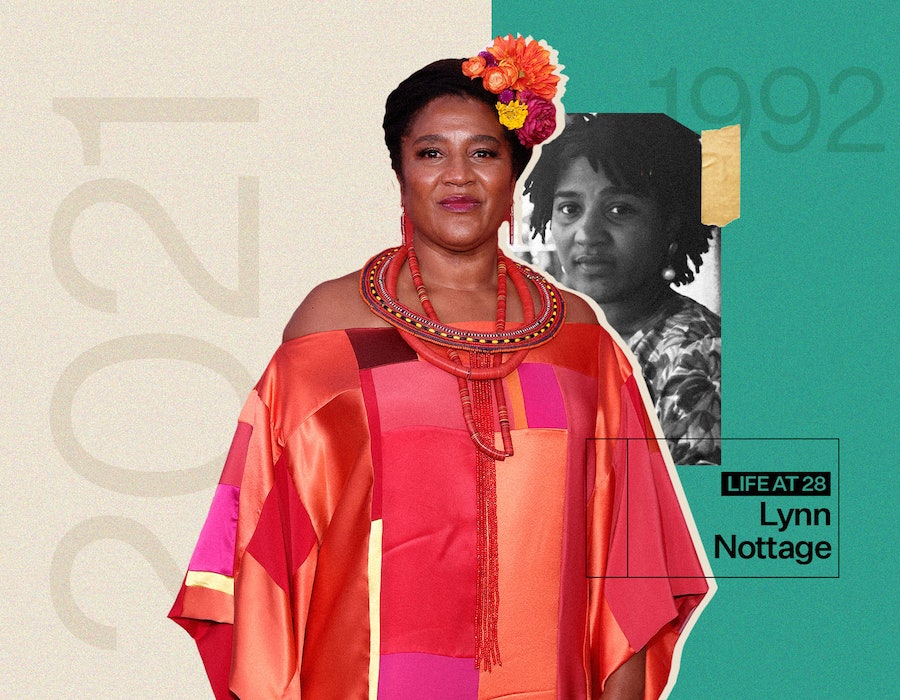 Playwright Lynn Nottage has already left an indelible mark on both stage and screen by creating dialogue in difficult spaces. It’s how she earned two Pulitzers, for portrayals of Congolese brothel workers during the civil war (Ruined) and the intimate effects of de-industrialization in small-town Pennsylvania (Sweat), and why she was credited as lending a breakthrough, feminist lens to Netflix’s 2017 series She’s Gotta Have It, having co-written the adaptation of the classic Spike Lee film of the same name.

This season, she has two new shows: the play Clyde’s, which tells the stories of formerly incarcerated kitchen staffers at a roadside sandwich shop (it runs through Jan. 16 on Broadway and is available to stream online simultaneously); and next month, she’ll premiere her first Broadway musical, MJ. The show, for which Nottage wrote the book, chronicles the run-up to Michael Jackson’s 1992 Dangerous World Tour, featuring over 25 songs by the iconic performer. “Our work as artists is to not shy away from complication but to lean in,” she tells Bustle, addressing the controversy surrounding Jackson’s legacy.

But at age 28, such creative decisions were far away. Nottage was just about to leave a career at Amnesty International to pursue art full time.

Today the Brooklyn native, who’s 57, resides in the Boerum Hill brownstone of her childhood. But back in 1993, she was living in Uptown New York — at 110th Street and Amsterdam with her future husband, filmmaker Tony Gerber — in a gorgeous, rent-stabilized pre-war apartment that overlooked St. John the Divine. A time of great inspiration, Nottage regularly dined on pasta puttanesca, a recipe she’d just learned, and held court with other young artists of her time. But her immersion into the fraught and vital artistic life of a storyteller wouldn’t have begun if she hadn’t, at 28, taken the first leap.

At 28, you transitioned from working at Amnesty International to playwriting full time. What was the climate like then?

It was a time of tremendous upheaval. I had been working at Amnesty for about four years as the national press officer. I had completely thrown myself into it but was beginning to get a little restless because I had trained much of my life to be a playwright.

At that moment, we [at Amnesty International] were just beginning to assimilate the notion of women’s rights as human rights. Issues like female genital mutilation, child marriage, sex trafficking, and prostitution really divided organizations. A lot of organizations felt “Well, these are cultural issues, not policies enforced by governments. Is it really our responsibility as a human rights organization to intervene?” So there were a whole bevy of things that many of us women within the movement felt were important to address.

Was there a day you remember that encouraged you to embark on a career as a full-time artist?

I was sitting in my office the day photographer Donna Ferrato brought in images of women as they were arriving at a battered women’s shelter, in hopes that there was something we could do with them. The images were arresting and beautiful, difficult and fraught, and I felt I needed to respond in some way. So I closed my door and wrote a play.

That was really the transitional moment. I had believed that doing human rights work would be enough to keep me aloft, spiritually, emotionally, politically, and socially. But I discovered I had been disconnected from the one thing I really loved — making art as a creative person. I wrote the short play Poof and sent it off to a competition, which I won.

The win was a coup, but you were doing immensely important work at Amnesty. That couldn’t have been easy to leave behind. How did you make your decision?

I had a very difficult choice, and at that moment, I also had the opportunity to step into a new position as interim director of communications. I got overwhelmed because I thought, If I take this next step, this is probably going to be what I do for the rest of my life.

I called my mother and said, “I think I want to quit my job and make a go of it as an artist. It’s really, really scary. And there really isn't that much room for Black women storytellers in the space I want to be in, but I have to try.” I likened it to jumping off of a cliff. Without the parachute, you’re free-falling, and you just hope you have the skills to navigate the wind. When I told her this, she said, “OK.” I needed that permission. So I tendered my resignation, I cashed my 401(k) — which is what I lived on — and I began my life anew.

Aside from your mother, were there women who inspired you to pioneer your own path at 28?

My grandmother, Waple Newton, one of the great raconteurs. The women who I went to graduate school with, like writer Saidiya Hartman, and my undergraduate playwriting professor, Paula Vogel. There’s also Seret Scott, who directed Poof. Seret was this formidable woman in the theater space. I took a great deal of inspiration from just her mere presence. I felt like I was riding in her wake.

On the fun side, leaving behind the intense schedule of an NGO for life as a freelance artist must have allowed you some extra time. What were your favorite ways to hang out with friends?

During my 20s, when everyone else was having fun and out at night, I was working late [for Amnesty], sometimes until 10 o’clock, and on weekends. Once I left my job, I finally had the opportunity to see shows. A night out was often going to listen to music or going to the theater, probably the Lower East Side or in downtown Brooklyn, and then afterward hanging out with friends. I also had one of those apartments that people liked coming to, and so a night out, a lot of times, was a night in with people, and I had one friend who used to [host] really great parties and salons.

The ’90s were such an important time for artists who broke through the old guard. Living in New York City, did you feel part of that groundswell?

Yeah, it was a really lovely time. I remember sitting in my living room, trying to start an organization for Black theater artists, with folks who have gone on to have careers: Lisa Jones, Keith Josef Adkins, Jake-Ann Jones, Carl Hancock Rux, Shelby Jiggetts, and Dominic Taylor. We were making a different kind of theater and pushing up against the establishment. We were ready to take on that fight.

When I listen to young Black theater artists today, it seems ironic that all these years later, we’re still fighting to be seen. They feel very much the way we did, the sense of necessity and urgency.

Was there a phrase or mantra that kept you motivated and focused on the work you wanted to make?

As an artist, the phrase that I cling to is “sustaining the complexity.” So often [in the world] we want things to be presented in a very binary way. It’s either black or white, and there’s no gray area. And as an artist, I’ve always been interested in the liminal space. The characters I am drawn to are complicated, morally ambiguous individuals, who are trying to negotiate a universe that may or may not be in sync with them, or a universe that may or may not accept who they are.

More like this
At 28, Rosie Perez Risked Her Career To Stop Playing Stereotypes
By Gabrielle Bondi
Hailee Kaleem Wright's Topsy-Turvy Path From MTV To Broadway
By Samantha Leach
Jessica Simpson On The Time She Was Pursued By A Backstreet Boy & An *NSYNC Member
By The Editors
Delia Cai’s Small-Town Romance Goes Beyond The Tropes
By Samantha Leach
Get Even More From Bustle — Sign Up For The Newsletter
From hair trends to relationship advice, our daily newsletter has everything you need to sound like a person who’s on TikTok, even if you aren’t.