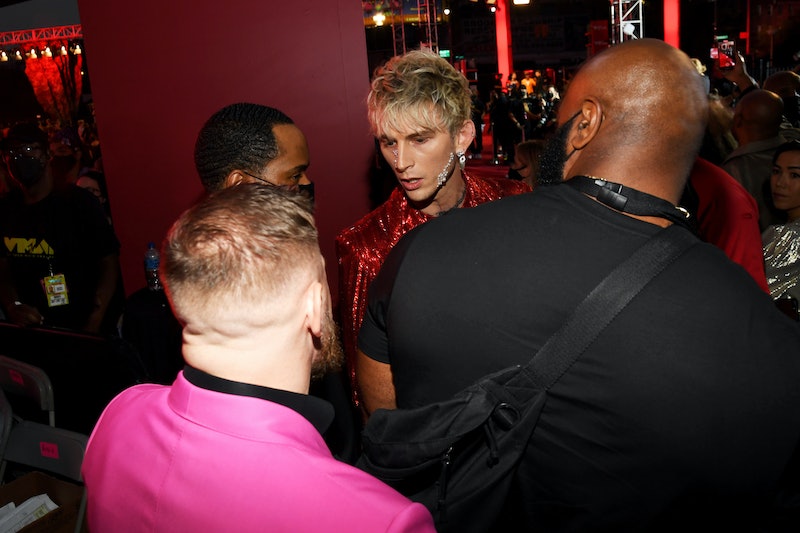 Conor McGregor is known for his superior MMA skills in the Octagon, but according to reports, the fighter allegedly aimed his fist at Machine Gun Kelly at the 2021 MTV Video Music Awards on Sept. 12. McGregor, who was at the awards ceremony as a presenter, reportedly yelled at MGK as he walked the red carpet with his girlfriend, Megan Fox, according to People.

A source told the magazine that McGregor “asked to take a photo with Kelly” but was “denied.” “Conor went in on it a little bit,” the source added, citing that McGregor then “dropped his cane” before “swinging it in Kelly’s direction.”

In an interesting turn of events, “Bloom” singer Troye Sivan also recounted an incident on the carpet. Though he didn’t name any names, the interview with Variety’s Marc Malkin seemed to corroborate reports of McGregor and Kelly’s alleged brawl. In a video clip published to Variety’s Twitter account, Sivan said, “I just saw a fight on the red carpet. I’m like, ‘You’re gonna die.’” When Malkin asked Sivan who the culprits were, Sivan added, “I don’t wanna, like, spread the rumors, but I saw some crazy sh*t and you’ll see. ’Cause there was, like, cameras going.” Sivan refused to disclose who was fighting after being asked once more. “I don’t want to spread the misinformation, ’cause I think I saw who it was, but, whatever.”

Malkin then asked MGK himself, and MGK responded by slapping the mic and walking away. Bustle reached out to McGregor and Kelly’s reps for comment.

MGK closed out the VMAs with a performance, which was introduced by Fox and Kourtney Kardashian. “I need you to get extra loud for our future baby daddies, Machine Gun Kelly and Travis Barker,” they said together.

Before the night’s drama began, MGK tried to manifest the win. So, aside from that alleged hiccup on the carpet, he had a successful evening.

More like this
Everything To Know About Taylor Swift’s 10th Studio Album, 'Midnights'
By Grace Wehniainen and Jake Viswanath
Twitter Is Freaking Out Over Rihanna’s 2023 Super Bowl Halftime Show Announcement
By Stephanie Topacio Long
Kanye West Apologizes To Kim K "For Any Stress I Have Caused" In Rare Interview
By Jake Viswanath
'School Of Rock' Changed Joe Keery's Life Forever
By Alyssa Lapid
Get Even More From Bustle — Sign Up For The Newsletter