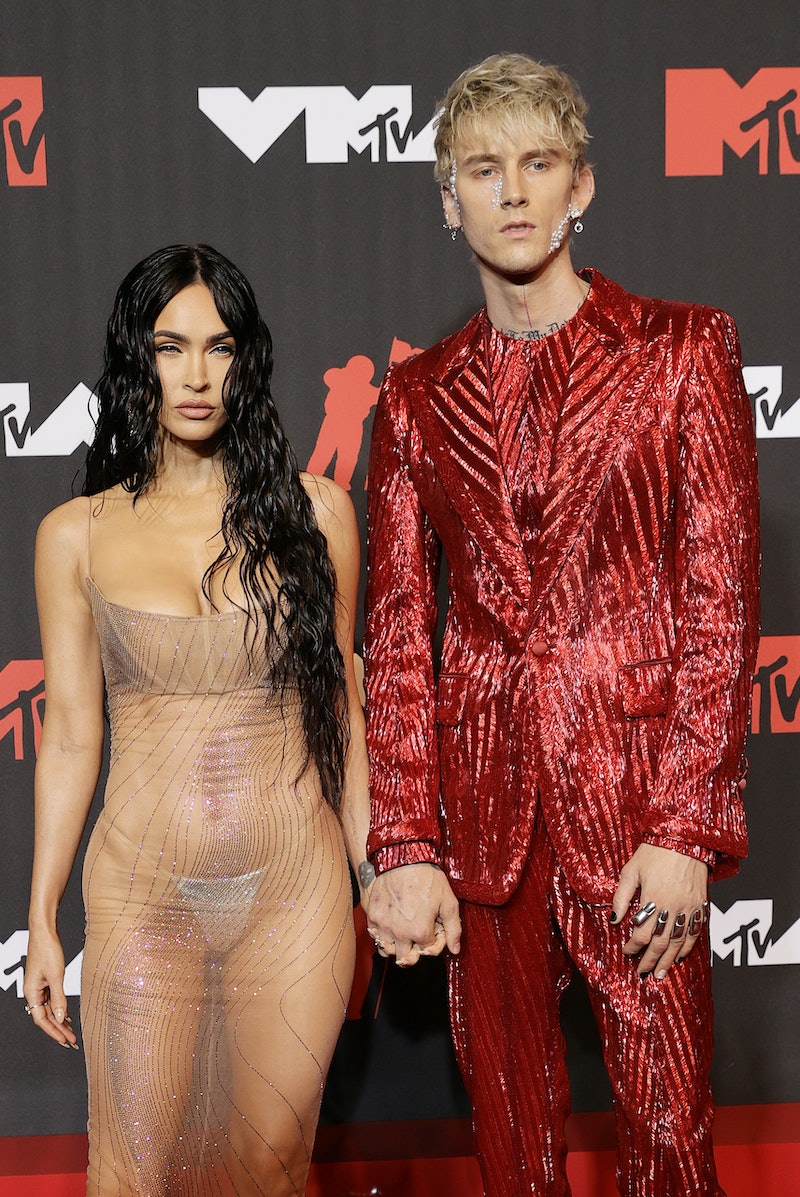 Megan Fox has made it clear that Machine Gun Kelly isn’t just her boyfriend — the musician is her “future baby daddy” and her “twin flame.” And she’s just as special to him. During a guest appearance on The Drew Barrymore Show on Friday, Dec. 10, MGK opened up about having “some real demons” and getting support from the “super compassionate” Fox.

The sit-down was a chance for Machine Gun Kelly to promote his new nail collection, UN/DN LAQR (aka “Undone Lacquer”), but it quickly went deeper than that. He started by letting Barrymore know that he was having “a really weird day” and didn’t want to come off as “cold” or “shy.” “I’m just, I’m a little insular and I’m having an odd day,” he explained.

When Barrymore asked whom the “Papercuts” singer turns to for support during tough times, Fox was the first person he mentioned. “My girl is really centered and kind of was, like, the one who encouraged me to face my past and stuff and pick out what it is that I’m running from and why I, like, put on those smiles I don’t want to wear and stuff like that,” he said. “And so that, that was big for me.”

Later, the host asked about how Fox responds when MGK gets “dark and deep.” While he described her as “the most compassionate person ever,” he did indicate that it can still be a little much for her sometimes. “I think, like, my dark is just so dark, she’s just like, ‘Oh god…’” Machine Gun Kelly said. “But no, she’s super compassionate, she’s the nicest person I’ve ever met, and, like, she loves me for me and all my crazy.”

The two met while filming the movie Midnight in the Switchgrass, and it was not by accident. As MGK also told Barrymore, “The only reason I took the movie was because they were like, ‘Your scene’s with Megan Fox.’” And from there, as many fans now know, it escalated quickly. They had lunch in her trailer — thanks to MGK waiting out there because his “gut is always right” and he somehow knew she’d invite him — and he was blown away.

The singer told the same story in an October British GQ profile in which he again discussed the impact Fox has had on him. “It’s almost like she reconnected a wire in my brain,” he said. “Creativity won’t stop coming out.”

As for Fox, she described their relationship as “very intense” to the magazine: “Our souls chose this to absolutely have to face our shadow selves; to face things about ourselves we didn’t want to have to know, that we tried to push away.”

More like this
Joe Alwyn Reacts To Taylor Swift Earning An NYU Doctorate In A Rare Interview
By Jake Viswanath and Nicole Pomarico
Fans Think Adele & Rich Paul Have Bought Their First Home Together
By Sam Ramsden
The 1st Photo Of Priyanka & Nick's' Baby Comes After 100 Days In The Hospital
By Jake Viswanath and Hugh McIntyre
Is Megan Fox Pregnant? MGK Gave A Shout-Out To Their “Unborn Child” Onstage
By Hugh McIntyre
Get Even More From Bustle — Sign Up For The Newsletter