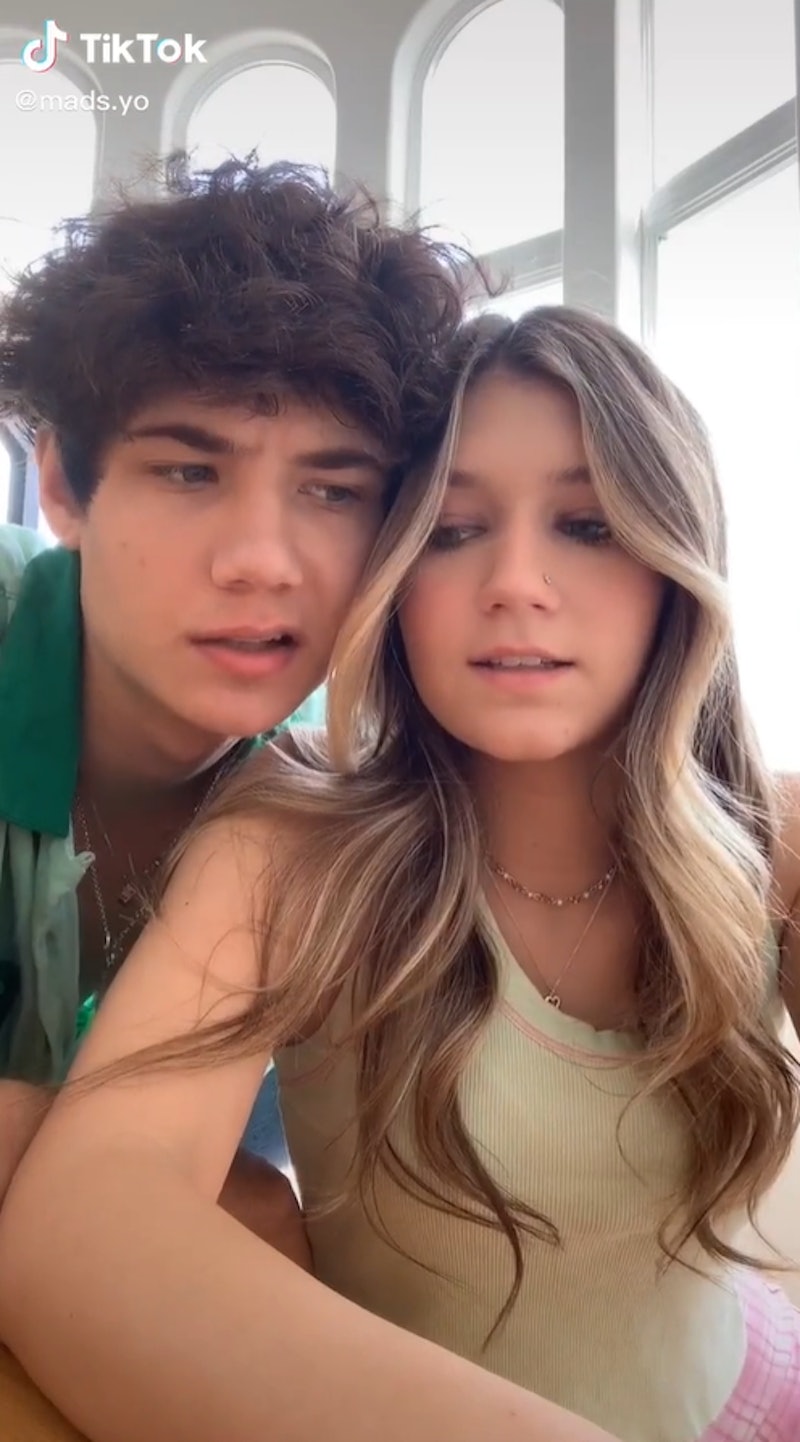 Despite their split in February, TikTok stars Mads Lewis and Jaden Hossler's relationship still has "Jads" supporters buzzing. It's no wonder, since Lewis and Hossler haven't exactly been acting like exes lately. The young stars were spotted getting cozy while boating with friends in Gainesville, Texas in late July, and they've remained supportive of each other since they confirmed they were no longer romantically involved.

Lewis, who has over 10 million followers on TikTok, and Hossler, who has over 7 million followers, were friends before they became a couple. In November 2019, Lewis shared a series of photos on Instagram celebrating Hossler's burgeoning music career, and declared him her best friend. She captioned the post, "my best friends a f*kn rockstar!" From there, the social media stars' relationship timeline becomes tricky to unravel.

It's not clear exactly how long these two have actually known each other, but given that Lewis is 17 and Hossler is 19, it's not surprising that they've bonded over being rising stars in Hollywood. While TikTok gave them a platform to grow their audiences, they both have career ambitions beyond the social media app. Hossler is a musician who was recently profiled in Billboard, and Lewis is an actor who stars in the web series Chicken Girls. From marking career milestones to recreating classic Friends scenes on TikTok, these friends turned couple turned friends again have been through a lot together.

Lewis shared that she was a fan of Hossler's TikToks before they met at a friend's house, in a January interview with Hollywire. It's unclear when this meeting took place, but the singer began making appearances on her TikTok in July of 2019.

While they met as early as July, the pair's first official date wasn't until September 2019. During a February interview with Hollywire, Hossler revealed that the Chicken Girls star invited him to attend the premiere of Maleficent: Mistress of Evil with her. "We didn't realize it was a date until after," he said.

It would be a few more weeks before they confirmed to the world that they were dating, but in November, Lewis shared a sweet Instagram supporting Hossler's music and calling him her best friend. By this point in their relationship, they were routinely making viral videos that included lip-syncing to popular songs, dance routines, and movie and TV show scene reenactments, making them one of the platform's most popular couples.

December 2019: They Confirm They're Dating

By December, Lewis and Hossler had confirmed they were officially dating. For his part, Hossler shared a black and white photo of himself snuggling Lewis that was captioned, "my muse." The couple were also frequent collaborators, with Lewis sharing a TikTok of them reenacting a High School Musical moment on December 31.

Shortly before the couple seemingly split, Lewis posted what appeared to be a tribute to her relationship with Hossler on TikTok. The video, which included snippets from their romance, was set to "Loyal" by PARTYNEXTDOOR and Drake. Fans then noticed that neither TikTok star posted a Valentine's Day tribute to the other. Instead, Hossler tweeted, "i didn’t cheat on mads stop hating on me."

Even after their reported breakup, Lewis and Hossler appeared to still be on good terms. They proved that their friendship has staying power in July when they began hanging out in the public eye again. The two went on a boat trip with friends mid-month, as reported by Hollywire, and earlier on July 16 they had a TikTok reunion alongside Addison Rae and Bryce Hill. Fans couldn't help but ask the former couple if they were back on again on social media, seemingly prompting Lewis to tweet "i'm single," on July 23. Hossler shared her Tweet, but he also tweeted "braddison and jads will save 2020."

Whether they're on again remains to be seen, but no matter what their relationship status these rising stars' recent social media activity suggests they're still best friends.