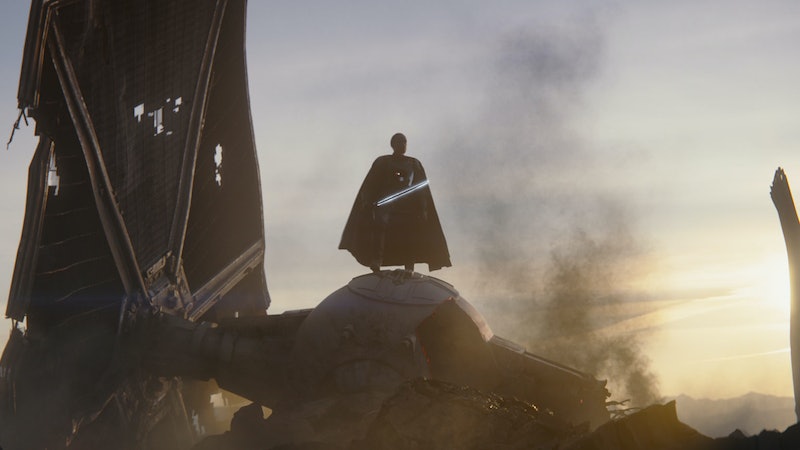 The Mandalorian Season 1 ended with a pretty massive cliffhanger: in the wake of the dramatic final battle, Moff Gideon cut himself from the wreckage of his downed TIE fighter with the Darksaber, a formidable weapon with connections to both the Mandalorians and the Jedi. We don't know anything about how Moff came into possession of the saber, but we do know a few things about its history.

First introduced in Star Wars: The Clone Wars, the Darksaber is the only known black lightsaber and is shaped more like a traditional sword than its counterparts. It was created over a thousand years ago by a Mandalorian named Tarre Vizsla, who was the first of his kind to become a Jedi Knight. Given its provenance, the blade is considered sacred to the Mandalorian people, and it has become a unifying symbol of their culture. It's changed hands several times throughout Star Wars history, at one point even being wielded by the evil Darth Maul. Prior to its appearance in The Mandalorian, the Darksaber was last seen in the hands of the Mandalorian leader Bo-Katan Kryze, who's set to appear in The Mandalorian Season 2.

Since the Season 1 reveal, Disney has expectedly been tight-lipped about any details regarding the Darksaber. But fans have managed to come up with a few theories nonetheless:

This theory from Inverse's Ryan Britt is perhaps the most obvious explanation as to how Gideon ended up with the Darksaber. Though Bo-Katan was hoping to use the weapon to unite the Mandalorians and overthrow the Imperial Forces that were occupying Mandalore, as Mandalorian fans know, that didn't happen. Instead, the Mandalorians were nearly wiped out as a people and are now in hiding across the galaxy. What's unknown is whether Gideon killed Bo-Katan or merely bested her in battle. Either way, he would have had to get the Darksaber from her.

As noted by Redditor ImpulsiveBeetle, the Darksaber changes hands through either inheritance or through death in combat. Darth Maul got it from the Mandalorian Pre Vizsla — who had inherited it — after he killed him. Obi-Wan Kenobi then killed Maul, which means the blade technically belonged to him. And Obi-Wan was of course then killed by Darth Vader, who should have inherited the sword. After Vader's death, the sword would have then been passed onto his son, Luke. This makes Luke the rightful owner of the Darksaber, and it's worth noting that the elusive Jedi is still alive during the events of The Mandalorian. Hmm...

The Darksaber Will Save The Mandalorian People

Despite the love for Baby Yoda, Mando — real name Din Djarin — is the protagonist of The Mandalorian. So his destiny probably includes something big. Reddit user AKDragoon posits that Mando is Force-sensitive, which they believe accounts for Mando's at times irrational protection of Baby Yoda. They also believe Mando will come into possession of the Darksaber, at which point he will use the combination of his Force powers and his new ancestral weapon to finally unite the Mandalorian people and reclaim their homeland. The show makes a pretty big deal about Mandalorian culture and displacement, so making Mando his people's ultimate hero and unifier would certainly make sense.

Will any of these theories prove true? Find out when The Mandalorian returns on Oct. 30.

More like this
Netflix Shut Down 'Bridgerton' S3 Rumours About A “Very Dark” Storyline
By Bustle
'The Last Of Us' Episode 4 Put Twitter Into An Emotional Spiral
By Alyssa Lapid
Bill & Frank’s 'The Last Of Us' Episode Has Twitter Emotionally Wrecked
By Alyssa Lapid
The Plane Crash In 'Dear Edward' Is Based On A 2010 Tragedy
By Grace Wehniainen
Get Even More From Bustle — Sign Up For The Newsletter
From hair trends to relationship advice, our daily newsletter has everything you need to sound like a person who’s on TikTok, even if you aren’t.