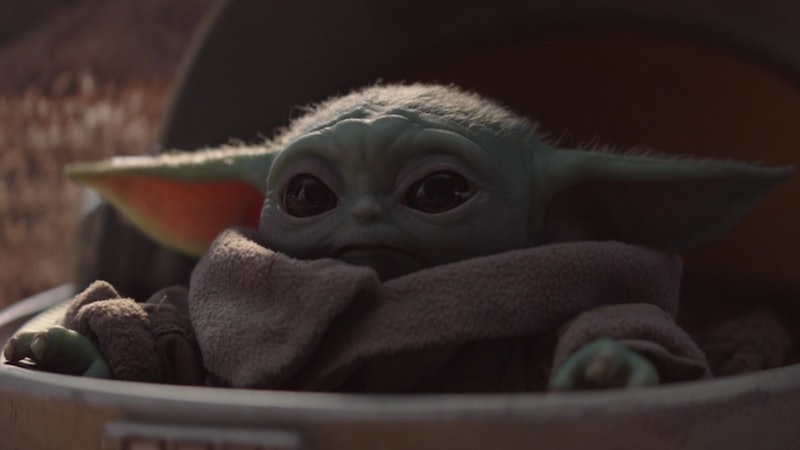 The standout star of The Mandalorian continues to take the galaxy by storm — this time, in the form of plush toys and bobble heads. Mattel and Funko have unveiled Baby Yoda plush toys and bobble-head figures that will make Mandalorian fans melt. The miniature (and adorable) jedi master from the Star Wars franchise made his first appearance on the Disney+ series in November and quickly became an internet sensation. Now, children and adults alike can take their love for him one step further with official merch. However, like all things good and cute, there’s a catch: While the Baby Yoda toys are available for pre-order, the items will take quite some time to ship out.

While the toys are only available for preorder, there's still plenty of Baby Yoda merch on Shop Disney’s website in the form of t-shirts and tanks. If the offerings still aren’t simply enough, Disney suggested that even more Baby Yoda offerings are on the way from retailers Lego and Hasbro, as per a report by Insider. In a statement issued to the publication, Paul Southern, Lucasfilm's SVP of licensing and franchise, revealed that Disney is “continuing to work closely with our licensees and retailers to roll out additional items including toys, collectibles, plush, games, apparel and more, allowing fans to celebrate the newest addition to Star Wars.”

Baby Yoda’s cuteness has been an undeniable force. In an interview with Bustle in November, Joshua Klapow, PhD, a clinical psychologist, broke down the psychology of Baby Yoda’s cuteness. “The Baby Yoda-like creature is not of our species but it is small, has large eyes, looks to be innocent, and looks to be young,” Klapow said. “We can’t help ourselves — we are going to have our nurturing instinct triggered and most of us will find this creature quite cute."

The cuteness has resulted in Baby Yoda memes and a “Dear Baby Yoda” cover based on “Dear Theodosia” from the Broadway show Hamilton. The song rendered Hamilton creator Lin-Manuel Miranda speechless.

More like this
These Cult-Favorite Socks Keep Selling Out (And They’re 20% Off Right Now)
By Danielle Kraese
Netflix Shut Down 'Bridgerton' S3 Rumours About A “Very Dark” Storyline
By Bustle
Bill & Frank’s 'The Last Of Us' Episode Has Twitter Emotionally Wrecked
By Alyssa Lapid
This 'Gossip Girl' Wardrobe Error Has Gone Viral On TikTok
By Alyssa Lapid
Get Even More From Bustle — Sign Up For The Newsletter
From hair trends to relationship advice, our daily newsletter has everything you need to sound like a person who’s on TikTok, even if you aren’t.