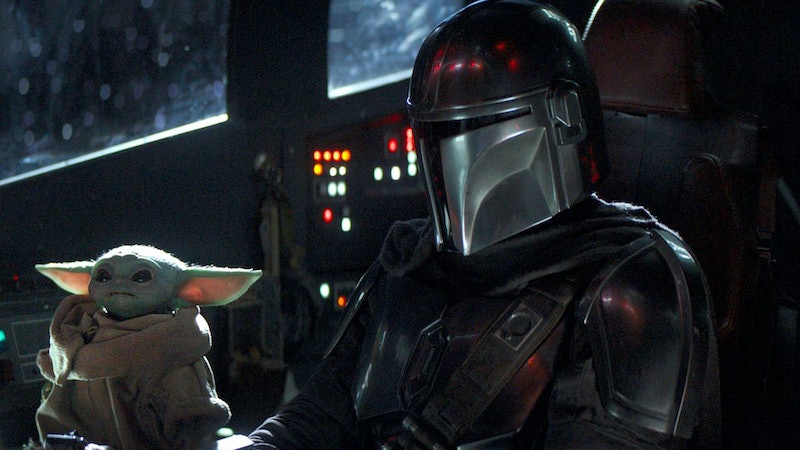 When Disney and Lucasfilm announced the first live-action Star Wars series, fans were ready for an epic show that would deliver the space battles from the movies directly into their living rooms. What they weren't ready for was a heartwarming saga about a man and his adopted, green-skinned, bat-eared child otherwise known as Baby Yoda. Now, before Mando and The Child hit the road again for Mandalorian Season 2, it's time to refresh your memory about all their the adorable, hilarious, and action-packed adventures.

The Mandalorian takes place between the events of the original trilogy and the sequel trilogy, picking up about five years after Return Of The Jedi. The galaxy is in full chaos following the fall of the Empire, but Kylo Ren and the First Order have yet to ignite the terror of The Force Awakens. In this brave new world, former rebel soldiers act as wandering ronins, former Empire acolytes carve out existences as petty war lords, and bounty hunters navigate the morally murky space between them, picking up jobs for the highest bidder. Here's what else you need to remember about Season 1 before Mandalorian returns.

On the planet Nevarro, bounty hunter Din Djarin (mostly referred to as simply "Mando") is directed to a new job by his Guild leader Greef Karga. The Client in question, along with his colleague Dr. Pershing, want Mando to retrieve a 50-year-old specimen from the planet Arvala-7, dead or alive. On Arvala-7, Mando meets an Ugnaught named Kuiil who teaches him to ride a blurrg, and shows him the way to the encampment where the target is being held. There, Mando meets up with droid bounty hunter IG-11 and takes down the soldiers guarding the bounty — which is revealed to be an adorable infant of the same species as Yoda. When IG-11 tries to kill the child, Mando guns down the droid instead.

Mando returns to his ship with Baby Yoda (as he's referred to by fans) in tow, only to find that his transport has been stripped for parts by Jawas. He tracks them to their sandcrawler and, after failing to retrieve his parts by force, agrees to a deal: they'll give him the parts if he can retrieve the egg of a Mudhorn. After nearly being killed by the fearsome beast, Mando is saved by Baby Yoda, who uses his impressive Force powers to suspend the Mudhorn long enough for Mando to slay it. Having completed his bargain with the Jawas, Mando repairs his ship and jets off for Nevarro.

In exchange for Baby Yoda, the Client pays Mando with 20 bars of beskar steel, a metal that is sacred to the Mandalorians. Mando visits the secret underground lair of his people, where an armorer uses the beskar to craft him some shiny new armor. Feeling guilty about turning Baby Yoda over, Mando then returns to the Client's location and rescues the child from Dr. Pershing. Greef puts a bounty on Mando for breaking the code of the Guild, and a desperate fight between the two ensues. Mando is only able to escape when his fellow Mandalorians join the fight, giving him enough time to get off Nevarro with Baby Yoda.

In which we meet: Cara Dune (Gina Carano) and Omera (Julia Jones)

Seeking refuge on the planet Sorgan, Mando and Baby Yoda encounter a former rebel shock trooper named Cara Dune. (Also, Baby Yoda adorably sips some soup.) Mando and Cara are contracted to defend a local village against raiders, where Mando bonds with a lovely widowed mother named Omera. Omera tries to take off Mando's helmet, but he reveals it's against Mandalorian custom to show his face. Together, everyone manages to defeat the raiders, and Mando briefly thinks about leaving Baby Yoda behind in the peaceful village. But when a bounty hunter tracks them there and nearly kills Baby Yoda (before being killed by Cara), Mando realizes they're not safe, and they leave Sorgan.

After a pursuing bounty hunter damages Mando's ship, he's forced to land in Mos Eisley on Tatooine. He leaves his ship and Baby Yoda in the care of mechanic Peli Motto, then ventures to the cantina in search of a job that will provide payment for the ship's repairs. Along the way, he meets wannabe bounty hunter Toro Calican, who is attempting to pull off a job that will grant him entry into the Guild: capturing crime syndicate assassin Fennec Shand. Mando and Toro track and apprehend Fennec, and Fennec reveals that the bounty on Mando's head outweighs her own, hoping to get Toro to ally with her instead. However, Toro simply kills Fennec and attempts to collect Mando's bounty himself. He takes Baby Yoda hostage, but Mando is able to rescue the child and kill the traitorous Toro.

Still looking for work, Mando joins a team consisting of Mayfeld, Xi'an, Burg, and a droid called Q9-0 on a rescue mission. The target, revealed to be Xi'an's brother Qin, is being held on a New Republic prison ship. After infiltrating the ship, they kill the sole guard (played by actor Matt Lanter, the voice of Anakin Skywalker on the animated Clone Wars series), but not before he triggers a beacon alerting the New Republic. The team betrays Mando and locks him up, but he escapes and apprehends Mayfeld, Xi'an, and Burg, imprisoning them on the ship. He then guns down Q9-0 before he can kill Baby Yoda. Mando delivers Qin as promised, but plants the beacon on him, which results in New Republic ships blowing up the station as Mando pilots away.

In which we meet: Moff Gideon (Giancarlo Esposito)

After receiving a message from Greef Karga, Mando returns to Nevarro, which is under siege by troops led by Moff Gideon, who's looking for Baby Yoda. On his way, he recruits Cara and Kuiil for help, as well as a repaired IG-11, which Kuiil reprogrammed to protect Baby Yoda. After meeting up with Greef, the team is ambushed by some flying creatures, and Baby Yoda miraculously heals Greef's wounds. Greef reveals that he was going to betray Mando to Gideon, but has changed his mind because of Baby Yoda's help. Mando sends Kuiil and Baby Yoda back to the ship, after which he, Cara, and Greef find themselves cornered in a building by Gideon's troops. Before he can reach the safety of the ship, Kuiil is killed by two stormtroopers who kidnap Baby Yoda.

IG-11 kills the stormtroopers and rescues Baby Yoda. He then arrives and interrupts the standoff between Mando and Gideon, though Mando is severely injured. While Cara and Greef escape into the tunnels with Baby Yoda, IG-11 convinces Mando to remove his helmet so he can fix the wound on his head. Mando seeks help from his fellow Mandalorians, but finds they have all been killed except for the armorer, who gives Mando his first jet pack. Pursued by troops, IG-11 sacrifices himself so the others can escape. When Gideon attacks the group in a TIE fighter, Mando uses his new jet pack to bring him down, then leaves Nevarro with Baby Yoda, determined to find and return the child to the rest of its species. The season ends with Gideon cutting himself out of the wreckage of his ship with a legendary Mandalorian weapon called the Darksaber.

Where did Moff Gideon get the Darksaber? Will Mando find Baby Yoda's people? Find out when The Mandalorian Season 2 premieres on Friday, Oct. 30.