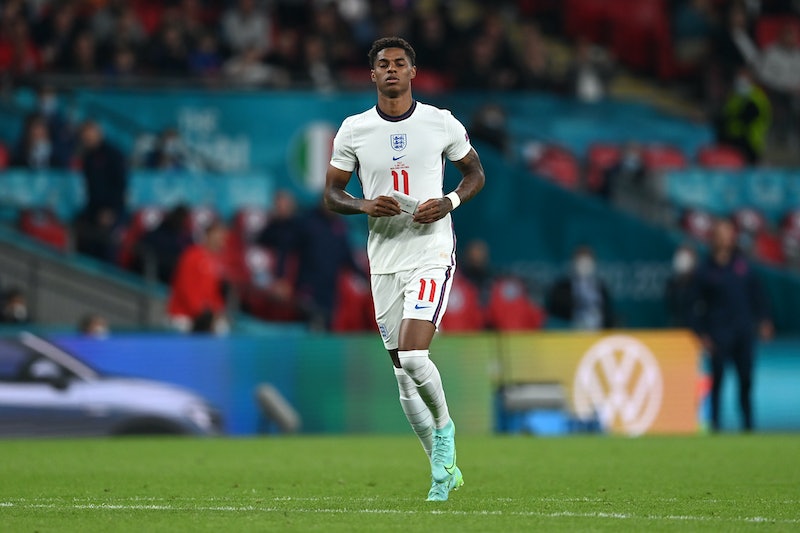 Manchester United and England star Marcus Rashford has taken a pre-emptive strike at The Spectator magazine on Twitter. The footballer has defended himself against yet-to-be-published article which Rashford says is about how he “benefitted commercially [from charitable work] in the last 18 months”.

The footballer and campaigner has spent much of the past year and a half campaigning to end child food poverty. Notably, he forced a series of U-turns from the government over its refusal to continue providing free school meals at the height of the coronavirus pandemic.

Rashford called out The Spectator on Twitter last night (July 20) after he found out that the right-leaning magazine was planning to run an article about his income from charity partnerships. “Just heard @spectator are planning to run a story on me tomorrow about how I have benefitted commercially in the last 18 months…” he wrote.

In a Twitter thread, the 23-year-old striker defended his relationships with brands, adding: “To clarify, I don’t need to partner with brands. I partner because I want to progress the work I do off the pitch and most of any fee I would receive contributes to that.”

Rashford’s campaign to continue free school meals in the holidays gained support from the public and politicians across party lines, and the striker’s partnership with Burberry saw the fashion house make a number of donations to youth charities and youth clubs, including London Youth and Norbrook Youth Club in Manchester, which he attended as a child.

What is The Spectator’s article on Marcus Rashford about?

The Spectator’s article on Rashford is reportedly an in-depth look on how the international footballer has “benefited commercially” from his social justice campaigning. However, as it has yet to be published, it’s not clear exactly what claims it has made about Rashford.

His response suggests it may claim that his campaigning has raised his profile and, therefore, garnered him more interest from brands. He wrote on Twitter that while this may be the case, he is already a well-known figure due to his career as Premier League and International football player: “Do I have a larger commercial appeal following the u-turns? I’m sure. But I’m also a Manchester United and England international footballer,” Rashford wrote in the Twitter thread. “Why has there always got to be a motive? Why can’t we just do the right thing?”

The Spectator is a right-leaning magazine, which means it tends to err on the side of the government when it comes to political opinion, having opposed Rashford’s position on free school meals in the past.

The magazine, owned by the Barclay brother who also owns the Telegraph, also published articles attempting to downplay the racism Rashford faced along with his Three Lions teammates Jadon Sancho and Bukayo Saka after they missed penalties in the Euro 2020 final.

As previously mentioned, Rashford has stated that many of his brand partnerships have been charitable in nature. He has also raised more money for charity than he has earned. The footballer became the youngest person to top The Sunday Times Giving List for 2021, the newspaper’s measure of generosity from those “best equipped to make a difference”. Rashford’s food poverty campaign and ambassadorship with food poverty charity FareShare raised £20 million, £4 million more than his net worth of £16 million.

The fact that many Premier League and international footballers benefit from commercial relationships with brands, whether a charitable partnership is created or not, speaks to the unfairness of aiming the accusation at one individual.

Who else has spoken out?

The reaction to Rashford’s thread has been largely positive, with many public figures sending him messages of support. “Keep doing what you’re doing, Marcus, you’re an inspiration and a hero,” wrote ex-footballer and presenter Gary Lineker, calling The Spectator’s article “disingenuous, spiteful nonsense.”

“The backlash always comes,” wrote Jess Philips, Labour MP for Birmingham on Twitter. “Marcus Rashford has done nothing wrong but he doesn't have to be perfect to do good regardless.”

“This kind of attack always comes for people trying to make change and be kind, it's to try and put others off doing it,” added Philips.

Andy Burnham, Mayor of Greater Manchester, where Rashford was born and raised, said: “Honestly Marcus, Greater Manchester could not love you more. You don’t have to justify yourself to anyone here, whatever they write about you. We just have one ask: please keep being who you are and doing what you do.”

Author Malorie Blackman responded with a quote from Mahatma Ghandi: “‘First they ignore you, then they laugh at you, then they attack you - and then you win.’”

“When having a voice and a conscience and using them for good are seen as attributes to be torn down in a feeble attempt [to] control or to silence. Keep on moving, Marcus. We see you,” added Blackman.

More like this
Gen Z Are Twice As Likely To Identify As Queer, According To New Data
By Sam Ramsden
Rita Ora Finally Opened Up About Marrying Taika Waititi & Their "Perfect" Wedding
By Sophie McEvoy and Catharina Cheung
This Is When Netflix Is Going To Start Charging You For Sharing Passwords
By Darshita Goyal
Pret & Costa’s Coffee Is The Strongest On The High Street, According To Which?
By Sam Ramsden
Get The Very Best Of Bustle/UK
Sign up for Bustle UK's twice-weekly newsletter, featuring the latest must-watch TV, moving personal stories, and expert advice on the hottest viral buys.