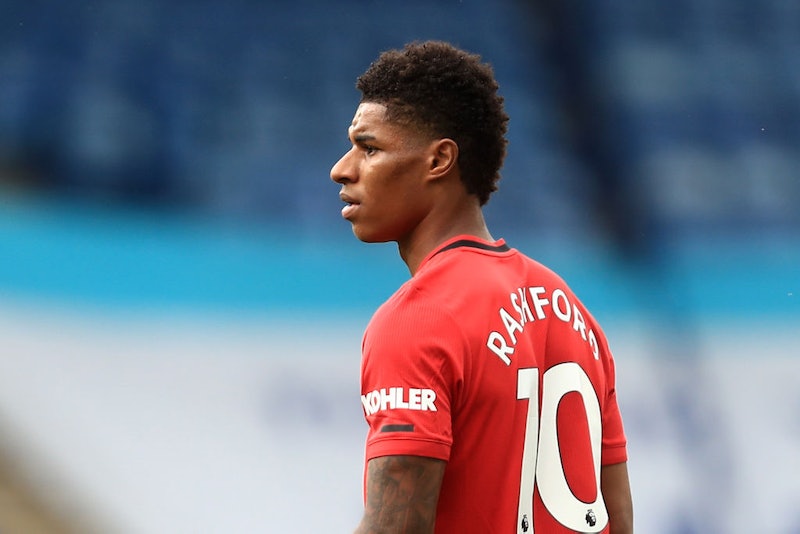 Even with football being put on hold during the pandemic, Manchester United and England striker Marcus Rashford still made headlines. His open letter secured a government U-turn, securing free meals for low-income households and helping millions of children across the UK. Now, he's making headlines all over again, as the cover star of British Vogue's September issue, alongside Adwoa Aboah.

Photographed by Misan Harriman – the first Black male photographer to capture a cover of British Vogue in the title's 104-year history – Rashford is one of the many voices Edward Enninful's title is celebrating under the theme of 'Activism Now'. Speaking to the fashion bible, Rashford revealed how activism and athleticism are inextricably linked for him, and why we are only just scratching the surface of the child poverty problem the UK faces.

“I’m by no means a politician," he said, "but I had a voice and a platform that could be used to at least ask the questions." Reflecting on how athletes aren't always encouraged to be political, Rashford was also quick to set the record straight and highlight the fact that many other footballers play their part, too. “Plenty of athletes and clubs work within the communities. You might not always hear about it, but that doesn’t mean they aren’t,” he explained. “On a sensitive subject like this, being myself was enough, because nobody could tell my childhood story better than me.”

Rashford's personal experience certainly helped make his case, but it also added a different layer of pressure. “As an athlete, failure is a part of everyday life. You lose a game, you bounce back for the next one. You lose in a cup final, you come back stronger next season. In this case, the failure would have been me not standing up for all of those people that didn’t have a voice.”

An estimated 1.3 million children and families are set to benefit from Rashford’s successful campaign with FareShare. “I always swore to my mum that if one day I was in a position to help, then I would, and an opportunity presented itself,” he added. “I’m a Black man from a Black family and I will eventually have Black children. I want my children to grow up in a world where regardless of the colour of your skin you have the same opportunities to succeed in life. No one person is more important than the other. The beauty of the government U-turn was that we all came together as one – regardless of race, sex, religion, background. We all agreed that our children should be looked after – all of our children. We were together in that feeling. That was a powerful moment. I don’t think I’ve felt pride like that before.”

But the work doesn't end there. Rashford points to the reliance on food banks and free school meals as a signifier of a bigger poverty problem in the UK. “No child in this country should be going hungry," he said. "End of story.”

The Sept. 2020 issue of British Vogue will be on newsstands on Aug. 7.

More like this
What The UK Blocking Scotland’s Gender Recognition Bill Means
By Sam Ramsden
Gen Z Are Twice As Likely To Identify As Queer, According To New Data
By Sam Ramsden
The UK Government Is *Finally* Banning Conversion Therapy
By Sophie McEvoy
Here’s Where The NHS Nurses’ Strike Currently Stands
By Sophie McEvoy
Get The Very Best Of Bustle/UK
Sign up for Bustle UK's twice-weekly newsletter, featuring the latest must-watch TV, moving personal stories, and expert advice on the hottest viral buys.