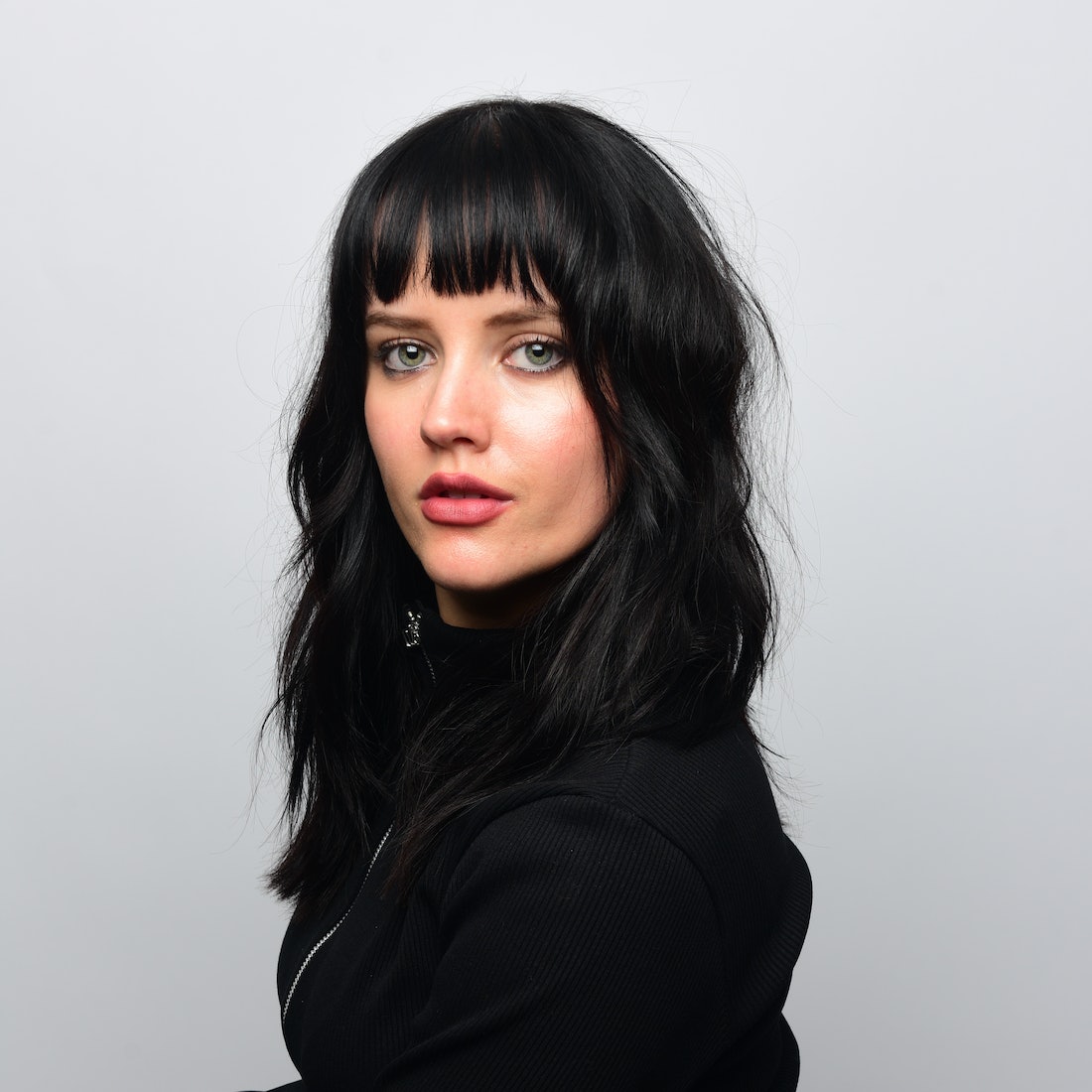 “I couldn’t tell where the natural environment ended and the set began,” Markella Kavenagh tells me of the first moment she set foot on the set of The Lord Of The Rings: The Rings of Power. Much like the audience at home, albeit with a better view, the 22-year-old was blown away by the visually stunning filming locations in New Zealand. Thanks to her Harfoot character, Elanor "Nori" Brandyfoot, Kavenagh got to enjoy the outdoors to the fullest extent. A breed of Hobbit, the Harfoots spend their time living, and concealing themselves, amongst the green-tinged moors of Middle-earth. “They [production] really made it look like we were part of the natural environment, which was like a character in our world,” she recalls.

I meet with Kavenagh in a London hotel on the same week the series is set to debut on Prime Video. Just a stone’s throw away from us, workmen are deconstructing the elaborate elven-inspired set which was set up in London’s Leicester Square for the global premiere the night before. There’s a buzz of excitement in the air, not to mention the frantic energy that comes with busy press days. Yet Kavenagh, for the large part, seems unfazed. There’s a calmness about her throughout our interview. It could be tiredness from the night before, but it strikes me as more than that. She’s taking the experience in her stride, whilst still making sure not to take it for granted.

Kavenagh was working in a fashion retailer in her native Australia when she was invited to read for a part in The Lord Of The Rings prequel. One moment she was locking up the shop, the next, she was planning for the biggest audition of her life. After completing a series of screen tests, whereby she read for a character shielded by a pseudonym, Kavenagh got the life-changing call telling her she’d been cast in the then-nondescript role. A remarkable moment for anyone, especially a young actor in the very early stages of their career.

“It was unbelievable. But I couldn’t tell anyone, so I had the most, like, internal celebration,” remembers Kavenagh. “I might have told my mum [brief details], but the rest was very much on lockdown.” I note that it must have been hard to keep quiet about such a monumental update, although good practice for not revealing spoilers later on. “I don’t mind it too much,” the actor says, admitting she rather enjoys keeping certain developments to herself. “It’s exciting when it is finally released.” Whilst this ability to keep things on “lockdown” is undoubtedly an asset for Kavenagh, I’m conscious it could prove more problematic for whoever’s interviewing her. In this case, me.

Kavenagh joins fellow actors Morfydd Clark and Nazanin Bonaidi, among others, at the heart of The Rings Of Power’s expertly-woven multilayered plot. A character created specially for the series, teenager Nori holds an almighty presence among her fellow Harfoots. She’s mischievous and inquisitive, with an endearing penchant for getting herself into trouble. “I do share [her liking for an adventure] I think, but I’m not sure I’m as brave as her,” the actor reflects.

At the heart of Nori’s story lies The Stranger, portrayed by Daniel Weyman. The giant-like figure falls to earth from a burning ball of fire that has torn through the sky. Going against everything she’s been taught when it comes to trusting anything other, Kavenagh approaches The Stranger to help him, building him a place to rest and offering him snails to eat. What follows is a series of tender moments as the two learn to communicate with one another, despite not sharing a common tongue. Their connection and willingness to embrace the unknown transcends language, and while it’s Nori who initially comes to the rescue of her larger-than-life friend, he soon returns the favour. It’s as though they were destined to meet and accompany one another during the next phase of their respective lives.

The Harfoots don’t see vulnerability as a weakness, but as a strength. Their openness allows for better communication and greater change within the community. I really admire that about them.

The overriding question from the audience, and one that still persists seven episodes into the eight-part series, is: Who is The Stranger? Fan theories have pegged him as everyone from Sauron to Gandalf. I ask Kavenagh what she can tell me about his identity. “I genuinely don’t know! If I did, I’d say I knew, but I couldn’t tell you,” she says, teasing how “the show subverts your expectations a bit. You think a character is one thing, and then they surprise you.”

Kavenagh does, however, fill me in on the reality behind Nori and The Stranger’s magnetic first scene, and the ones that followed. Whilst many viewers may not consider the significant difference in height and size between Nori and her unidentified friend, as die-hard fans of The Lord Of The Rings film franchise may know, a lot of work goes into making sure everything appears cohesive on screen. And it’s not all in post-production, as the actors have to be aware of the technology and filming practices at play when it comes to scaling the size of a character. This “Scale Academy,” as Kavenagh calls it, is the secret weapon behind many of the scenes we take for granted.

“There were very technical scale explanations. The crew was so accommodating, because we really had to establish, as actors, another way of preparing for the scenes,” Kavenagh notes. “Daniel and myself couldn’t act directly opposite each other, so it was a very new experience.” As a result, some of the scenes featuring The Stranger involve clever manipulations. “Maths is beyond me, so I couldn’t tell you the technicalities,” Kavenagh laughs. “But there’s a scale double… like in that scene where Nori reaches out to The Stranger with the snail. That’s not my hand.”

The Rings Of Power details the events leading up to the unforgiving battle between light and dark, affecting everyone from the humble Harfoots to the elven royalty. It’s a visually stunning series, giving life to magical worlds and beings. And there’s been some real-life lessons at the core of this journey for Kavenagh. Praising her newfound on-screen tribe, the Harfoots, the Melbourne native remarks: “They don’t see vulnerability as a weakness, but as a strength. Their openness allows for better communication and greater change within the community. I really admire that about them.”

At present, Kavenagh’s journey somewhat mirrors Nori’s — two young women learning about themselves as they embark on a new adventure. The actor, along with many of her co-stars, is now firmly under the spotlight. “I’m still kind of navigating my social media presence, I guess,” Kavenagh muses, when I ask how she’s dealing with the added online attention. “It can be quite an amazing platform, but it’s important to figure out what your relationship to it is. I want to be careful that I’m present in my real life.” Luckily, the actor has a strong support network in her friends who, although supportive, remain unperturbed by the glamour that comes with co-leading a major TV production. “They’re happy and excited [for me], but they also don’t care, in a way, which is a great mix. I’ve known them for years. We all support each other in whatever we do,” the actor shares.

As for what comes next for Kavenagh, she tells me, without revealing any specifics, that she’d welcome the chance to explore Nori’s story further, should she be involved in a second season.

“I’d like to think she has more adventures, wherever that will take her,“ the actor remarks, wistfully. Away from the series, Kavenagh is honing an off-camera passion of hers. “I’m currently writing a film with a friend of mine, Katie Found, who’s a director in Australia, so hopefully something comes of that,” she shares. “It’s for an initiative in Victoria, which is very exciting.” And with that, our time together is up. When I stand to leave, Kavenagh gestures to a plate of snacks on the table, offering me one for the road. I look down to see a selection of biscuits. Not a snail in sight. With a sigh of relief, I make my goodbyes and head for the door.