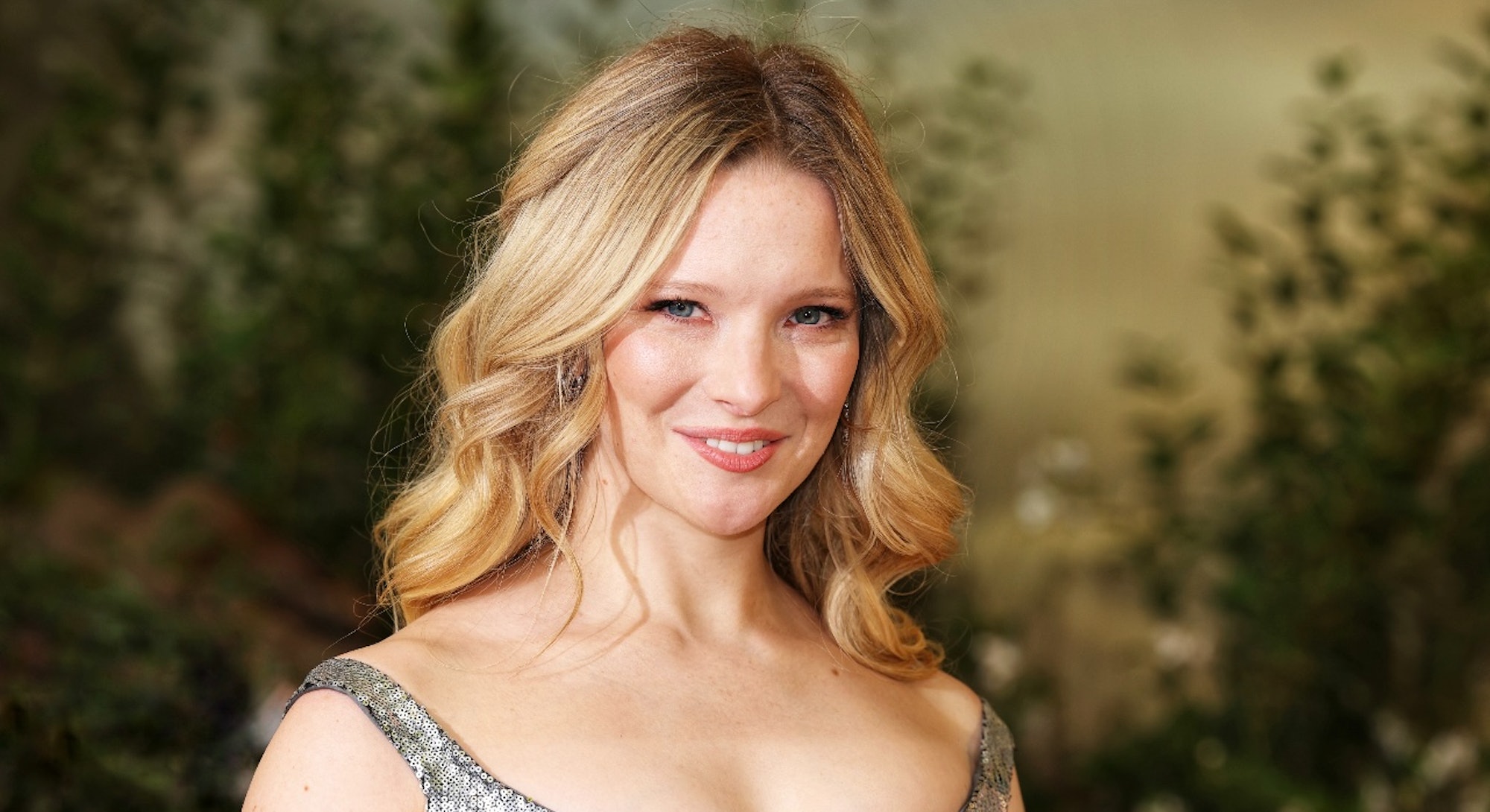 It’s not often you find yourself having an in-depth exchange about the pros and cons of prosthetic elf ears, but that’s exactly what happens when I meet with Morfydd Clark, who brings elven warrior Galadriel to life in The Lord Of The Rings: The Rings Of Power. We catch up in London the day after the global premiere of the Prime Video series, which has already gone down in history as the most expensive TV production ever made. “My [elf] ears only cover the top of my real ones, so I don’t have any hearing impairment with them. You can’t even tell that they’re on,” the actor shares, admitting she spent close to two hours in the makeup chair each day. The problem arises, she notes, when it’s time to remove the elven add-ons. “When you take them off, your ears look sad and stumpy,” she laughs, gesturing to her own.

Clark has embraced all of the fantastical elements that come with joining the almighty franchise, taking particular joy from the intricate outfits, curated by costume designer Kate Hawley, Galadriel dons shining silver armour for her battle scenes. When not leading an army, she’s in ethereal dresses. “There were times I thought, ‘I feel like I could go to the Met Gala in this,’” Clark says of the spectacular ensembles. “There were so many details. The elves care about that a lot. They’re obsessed with beauty.”

And Clark would know, as her journey with The Lord Of The Rings franchise began long before she was cast in this role. The Sweden-born actor, who moved to Wales as an infant, is a major fan of J.R.R. Tolkien’s work, and the films based on them. She notes the “great personal history” the franchise has for her, looking back on a childhood spent devouring the books. It’s easy to understand, then, just how big of a deal this is for her.

Clark only found out she was trying out for The Lord Of The Rings prequel whilst in the waiting room for the audition. “It added a heightened sense of pressure, but I was also like, ‘You’ve watched those films. You’ve read those books. You’re obsessed with these characters. Now is the time to use it.’” In the midst of trying to secure a role in the coveted series, the actor was on a major career high, having earned critical acclaim for her roles in comedy drama The Personal History of David Copperfield and horror film Saint Maud, in the latter of which she played the title role.

It was whilst promoting these films at the Toronto International Film Festival in 2019 that she found out she’d been cast in The Rings Of Power. She had spent the plane journey to Canada nervously tapping in anticipation of the upcoming verdict. “I was probably driving the person next to me mad,” she recalls. The call eventually arrived when she was having her makeup done, but Clark didn’t have time to process her emotions. “I was whisked off to the premiere, but I fainted during the Q&A,” Clark says, matter-of-factly. Noting that the exciting update, along with the “surreal” reality of being at TIFF, was all too much, she explains: “It was just all very overwhelming. I think sometimes you can have too many life-changing moments one after the other.”

You’ve watched those films. You’ve read those books. You’re obsessed with these characters. Now is the time to use it.

Galadriel is an iconic figure for anyone who has spent time in Tolkien’s world. The elven queen is portrayed by Cate Blanchett in The Lord Of The Rings film franchise, and it’s a performance Clark is only too aware of. “Cate Blanchett is almost as much of a legend [to me] as Galadriel,” she reveals, explaining she has yet to meet or speak with Blanchett in real life. “That would be another faint-risk situation,” she teases. “Also, I think sometimes talking to actors isn’t as helpful as watching them.”

The Rings Of Power’s multilayered story details the origins of the ultimate battle between light and dark. And Galadriel is undeniably our anchor. It’s instantly clear that she’s a force to be reckoned with. We’re barely introduced to the character when we witness her kill a snow troll. The esteemed warrior is determined to hunt down Sauron and eradicate the stain of his atrocities from her people and land. This thirst for vengeance doesn't make Galadriel the best team player. Her own soldiers abandon her at one point. But even when the character’s tempestuous decision-making threatens to isolate her, the audience can’t help but root for her.

In Episode 6, Galadriel’s fight scenes are spectacular as she makes her triumphant return to Middle-earth as The Commander Of The North Armies. On screen, the epic sword work and battle action appears to come effortlessly to our conflicted heroine. In reality, Clark, along with her castmates, spent months doing intensive stunt training — a task she welcomed. “I was really grateful, as I hadn’t really done that before. I’d done lots of being attacked, but not being in control,” she explains.

However, the bootcamp wasn’t without its challenges, and the swimming lessons proved to be a humbling experience. Galadriel spends much of Episode 2 submerged in water, so it was key for the actor to look competent and in control. “I thought I could swim. But when I went for my first lesson, [the teacher] had me do a few lengths and then stopped me halfway through,” Clark says, amused by the memory. “He said, ‘Let’s go back to basics.’ I could stay afloat, but now I can properly swim, and it’s been amazing.” So, did she leave the stunt training sessions with any major battle wounds? “I got through pretty unscathed, actually,” Clark notes. “But on our first day of press at Comic Con, I twisted my knee. Typical!” she laughs.

During filming, Clark and her fellow castmates, who were all living and working in New Zealand together during the tumultuous year of 2020, relied on each other for comfort and support. “Everyone was very generous with each other because we were all carrying a certain weight of homesickness,” the actor recalls. And Clark found another way to keep her spirits up, as she turned to comfort telly after wrapping up long filming days. Her TV shows of choice? “I watched loads of The Great Pottery Throwdown and The [Great British] Sewing Bee,” she reveals. I tell her she has something in common with Brad Pitt, who is also known to love the pottery-based reality series. Clark laughs, responding with: “I’m not surprised. I think the reach of that show is similar to why I love Tolkien. It’s about gentleness, kindness, and the wonder of what people can create. I love it. I find it so inspiring.”

Hopefully, as Galadriel becomes more wise, so will I. She'll probably learn to take her time more, and I think I could do that a bit.

Thanks to the rich history of Tolkien’s world, we know what eventually becomes of Galadriel, but I'm interested to hear what lies ahead for her in The Rings Of Power. Careful not to reveal any specific spoilers, yet giving me insight into her character’s future, Clark details: “Galadriel is going to become much more powerful, whilst also realising that she doesn’t have all the answers.” Aligning her own journey with that of her on-screen namesake, the actor says: “Hopefully, as Galadriel becomes more wise, so will I. It’s hard, because she’s quite a big deal [to live up to]. But she'll probably learn to take her time more, and I think I could do that a bit.”

While Galadriel is on the cusp of something monumental, so is Clark, as leading a franchise of this magnitude is bound to transform her off-camera life, too. I ask her if she’s ready for the added spotlight that comes with such a role. “I’ve been told I’m a bit in denial about it. But I don’t feel… I can’t imagine this supposed future that I’m going to exist in,” she shares, poignantly. “I feel very lucky that I have good friends and family around me, whatever happens. I don’t think my little life will change.”