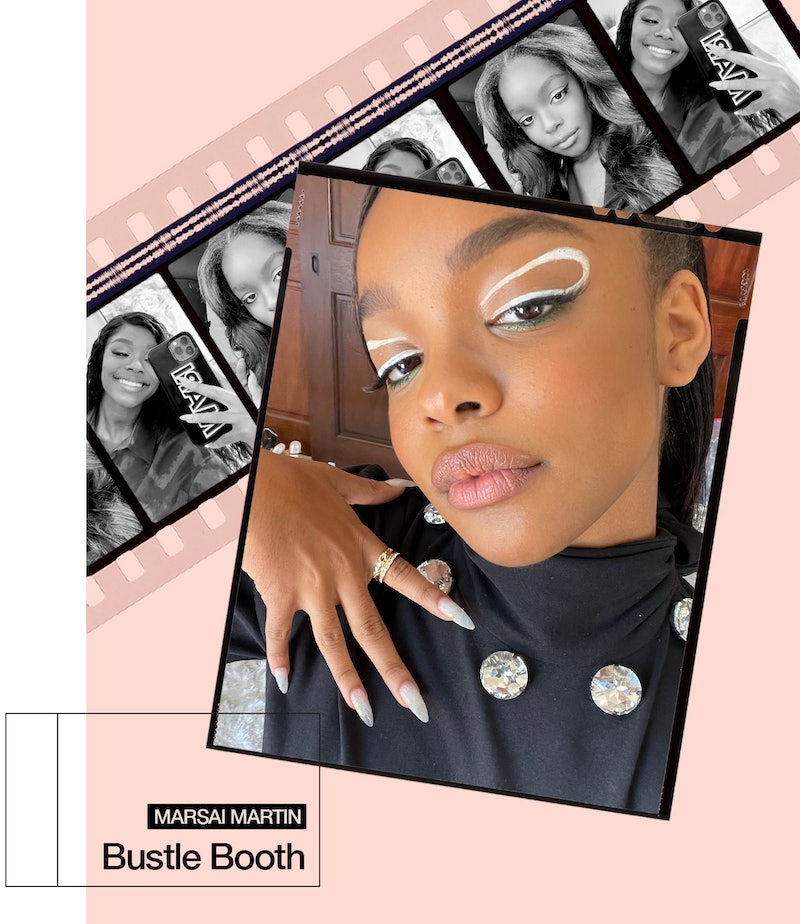 Marsai Martin is at a crossroads. With black-ish’s eighth and final season set to air early next year, she’s preparing to say goodbye to the show she grew up making. The 16-year-old feels at home playing the snarky Diane, but what comes next will push her. “I'm not gonna lie, the kissing make-out scenes, the sex scenes, the cursing scenes — I want to get into those, but it's crazy to step out of your comfort zone,” Martin tells Bustle.

Luckily, she isn’t so easily intimidated — she wouldn’t have become Hollywood’s youngest-ever executive producer if she was. Through her company Genius Entertainment, Martin’s lined up several projects that will challenge her as a producer, including Disney series Saturdays, and fantasy adaptations Savvy and Amari and the Night Brothers (she’s expected to star in the latter as well). She’s also taking on more acting roles she can sink her teeth into, including a turn as the vivacious, no-nonsense friend Pru Granger in the newly-released Spirit Untamed. And she wants to take on a million more things: writing, directing, singing (despite some intense stage fright), and playing an ass-kicking assassin are all on her bucket list.

“That's the cool thing about being a kid and still having so much life to live: you can experience anything at any time. Having a production company, you can decide what you want to be in, what you want to direct, what you want to add to a certain script. I just want to try everything,” she says, “even the teenage stuff — driving, meeting guys.”

After all, if something doesn’t work out, she can just drop it — like she’s trying to do with social media. “I know it can be very damaging not just for your mental health but for your career as well.” She’s figuring things out through trial and error, just like every other teen. The only difference, she notes, is that she’s growing up in the public eye.

Not that she isn’t grateful to be where she is. “It's crazy to wrap my head around — a little girl from a small town, that grew up with a gap and some glasses and a shorty, being in this space,” she says. “It gets me emotional sometimes.”

Get to know more about Martin, from the celebrity she idolizes to her love of New Girl, in her Bustle Booth questionnaire below.

I like a caramel frappuccino or a chai latte.

Los Angelos, Turks and Caicos, Las Vegas, New Jersey, Palm Springs, Atlanta, and New York. Basically all the places that have my teams. I want to make sure when I call it’s not [too early] in the morning.

“How long is this going to take??” Madagascar, King Julien. Me and my grandma used to say it all the time. Madagascar is underrated!

New Girl. Obsessed. I’m so upset that it ended.

The Circle on Netflix.

Anything Beyoncé or Kendrick Lamar. He’s not [available] at karaoke as much and I wish he was, but when I see him, I go for it.

I’ve been traveling a lot recently. And my little sister — she says a lot of crazy things.

More like this
On 'The Handmaid’s Tale,' Christine Ko Fights Back
By Gretchen Smail
'Grey's Anatomy's New Intern Got Advice From Dr. Bailey Herself
By Grace Wehniainen
Jinkx Monsoon Is About To Get Real Sketchy
By Sam Ramsden
The New Bachelor Will Be Announced Next Week & Here Are The Top Contenders
By Grace Wehniainen
Get Even More From Bustle — Sign Up For The Newsletter