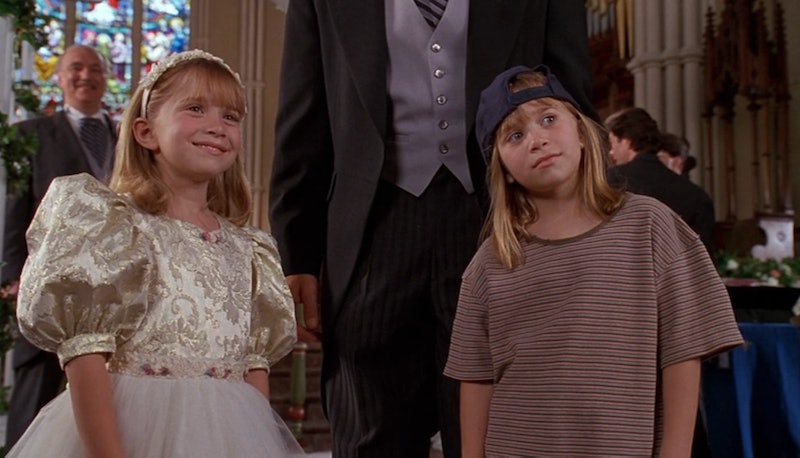 Mary-Kate and Ashley Olsen have been out of the film industry for a while now. Mary-Kate's last film, Beastly, came out in 2011, and Ashley last played "Kissing Girl #3" in The Jerk Theory in 2009 — who knew!

The sisters are now well-respected fashion designers of two fashion lines — The Row and Elizabeth & James at Kohl’s — but their many, many movies still live on. And if you have an undeniable, nostalgia-fueled urge to stream one of Mary-Kate and Ashley's movies, there are a few that are easy to find online.

The Olsen twins were in a ton of movies over the years, including theatrical releases, straight-to-DVD films, and shorts as part of their The Adventures of Mary-Kate & Ashley and You're Invited to Mary-Kate & Ashley's... series. Some of these short videos can be found cut into clips on YouTube, but as far as the full-length movies, several of them are available to stream, rent, or buy on popular streaming services, as you'll see below.

Regardless of why you want to watch some old Mary-Kate and Ashley movies — to remember the good old days, to show to the next generation of fans, or to remind yourself that the twins somehow aren't supposed to be related in It Takes Two — here are seven classics you can check out online right now.

Double, Double, Toil and Trouble is another made-for-TV Halloween movie that aired in 1993, following the success of To Grandmother’s House We Go. IMDb's interesting description reads: "On Halloween night, two precocious little girls try to save their parents from the greedy clutches of their nasty old Capitalist aunt." Sounds legit!

The Olsen twins visit a dude ranch owned by their late mom’s godmother, the future of which hangs in the balance. Like many of their movie, the ranch’s fate relies on two children. Somehow it always works out in their favor, which makes you wish your own problems end happily in your favor.

In their first film released in theaters, It Takes Two is like The Parent Trap in that it's about two girls who look alike, trying to get two adults who care about them to fall in love. It Takes Two is not exactly like The Parent Trap — the most notable difference is that the girls aren’t supposed to be related ... even though they’re literally twins. The film also stars Steve Guttenberg and Kirstie Alley (before she was a Trump supporter) as the two lovebirds.

The late ’90s were a renaissance for the Olsen twins. They churned out TV movies like a factory line. In Passport to Paris, the American twins go to Paris and do all the things normal teens do, like befriend a famous supermodel or convince the French Foreign Minister to pass a clean water bill. They also meet boys and deliver lines like, "What can I say? We're teenagers."

In Switching Goals, the twins once again opposites who switch places. One sister is athletic and great at soccer, while the other is more feminine and awful at the sport. Apparently, because feminine people can’t play soccer well, they decide to switch teams for reasons that make complete and total sense.

In their last film together, New York Minute is pure camp. Again, playing polar opposites, New York Minute is about an overachiever twin (Ashley) trying to get into Oxford, while the other (Mary-Kate) is a school-skipping slacker who wants to meet Simple Plan (did we mention it’s from 2004?). Complete with casual racism and life lessons from “Avril Lavignestein,” the film also features a cameo from their Full House dad, Bob Saget, as himself.