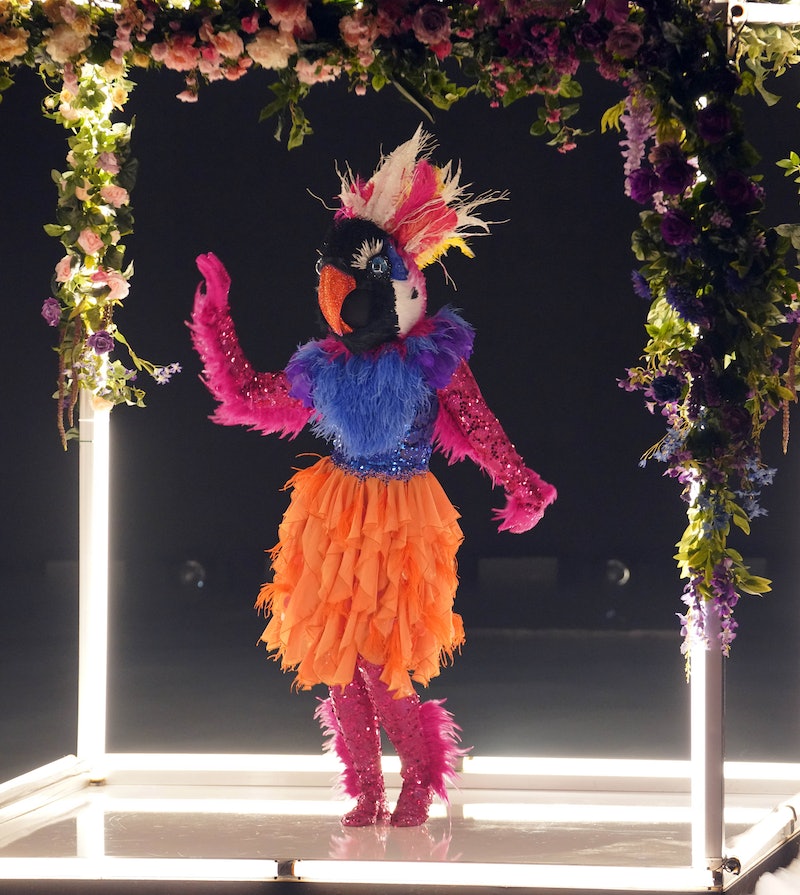 When The Masked Dancer first previewed the Exotic Bird, fans guessed Jennifer Lopez or Shakira was behind the mask, namely because the contestant wears a flashy feathered outfit and is into Latin dances. But the clue package from the Jan. 27 episode suggests the Exotic Bird is actually American Idol winner Jordin Sparks, another theory that's started to gain traction throughout the show.

We know that Exotic Bird's "natural habitat" is the racetrack, and that she races with two women with the number "17" on them. We also know Exotic Bird has been competitive since she was a teenager and was "lucky enough to win big pretty quickly." After winning, however, she felt attacked for her relationships and for being "a big bird." The show implies that she found happiness again through cooking, and she uses a carton of eggs labeled "best by '07." Various details include a pink perfume bottle, a Venus flytrap, and a free throw pose.

This all lines up with Sparks. She told ESPN that she grew up playing basketball, and she won American Idol in 2007 when she was only 17 years old. She also famously dated Jason Derulo, and they were often the subject of gossip until their breakup in 2014. In addition, Sparks has been scrutinized for her weight, created her own perfume line, and debuted a cooking YouTube series called "Heart of the Batter" in 2018.

Exotic Bird's second clue package on Jan. 20 continued to hint at Sparks. She says she got really sick with "a savage bird flu" right before the "biggest opportunity" of her life. But her mom told her that she was born with a unique gift and had to share it with the world. "As my mama told me, these hips don't lie," she says. In the end, she poses with an apple pie and is spotted with a football trophy.

In April 2008, just after her American Idol win, Sparks was diagnosed with an acute vocal chord hemorrhage. Per ABC News, it's an injury that could potentially ruin a singer's voice, so Sparks had to cancel several appearances. That included a cameo on Alicia Key's world tour, which was set to be a huge career boost for Sparks. Luckily, she healed and was able to rejoin the tour in May.

As for the pie reference, in 2019 Sparks played the lead in the Broadway musical Waitress, where she, naturally, served up pie. The football could be a reference to her father, Phillippi Sparks, who played in the NFL for years.

Of course, Sparks isn't the only name that's been mentioned, and another popular theory is that Exotic Bird is tennis star Venus Williams. She also grew up in a competitive environment, and fans on Reddit think the Venus flytrap could be a reference to her name. She and her sister Serena have both been criticized for their relationships and for being "big birds" in the past. Notably, Williams also lost out on some opportunities due to a sudden illness. In 2011 she was diagnosed with the autoimmune disease Sjogren's syndrome, which caused her to withdraw from the U.S. Open. Since then she's gone on to dominate tennis.

At this point, the hints could really go either way. But whoever Exotic Bird is, it's clear that she's worked hard to get on that stage.