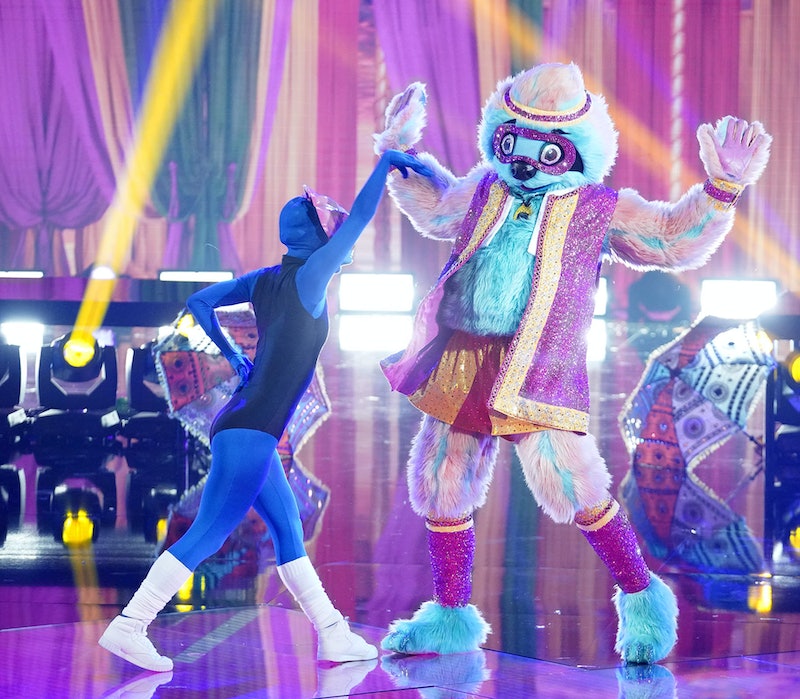 The Masked Dancer is down to its final five, and it seems like the remaining contestants are all well-known athletes and professional dancers. That especially goes for Sloth, whose comedic portrayal of a lazy sloth failed to hide his obvious dancing skills. While the judges have joked that it's Will Ferrell, the most popular theory is that Sloth is Maksim Chmerkovskiy from Dancing with the Stars.

For those unfamiliar, Chmerkovskiy was a professional dancer and choreographer on Dancing with the Stars for 12 years. He won Season 18 in 2014 alongside Olympic ice dancer Meryl Davis and made it to the final round five other times. He eventually left the show in 2018 to focus on his newborn son and wife, fellow Dancing with the Stars pro Peta Murgatroyd.

Sloth's clues packages seem to line up perfectly with Chmerkovskiy. In the first package, Sloth mentioned that he had a bad accident when he was a kid that required "a Mickey Mouse operation." Chmerkovskiy had a skiing accident when he was young, which required a metal rod be inserted into his upper leg. He was told he would never dance again but was back to competing in less than six months. The clue package also mentioned that Sloth now inspires kids to pursue their own dreams. Per his website, Chmerkovskiy and his father run a youth-oriented competitive dance studio, Rising Stars Dance Academy, in New Jersey.

Sloth's visual clues included a tube of toothpaste with the letters DWTS and several objects that could be referring to Chmerkovskiy's celebrity partners on the show. "Glee" is likely for Glee star Heather Morrison, while the a lab coat with the letters "D.R." likely means Denise Richards. There was also a red solo cup, and Chmerkovskiy danced with soccer goalkeeper Hope Solo in Season 13.

In the Sloth's second appearance, his "Word Up" clue was "leading man." As the male dancer, Chmerkovskiy is literally the leading man for each of his partners. Sloth also mentioned he used to live in a foreign country and had a reputation as a bad boy. Chmerkovskiy was born in Ukraine before his family immigrated to Brooklyn when he was a teen. Once on Dancing with the Stars, he was often dubbed "the bad boy of the ballroom."

Finally, Sloth's third clue package said he's "not new" to the dance floor. There was a chalkboard drawing of a wife and child, and his "Super Clue" was the number 18. Of course, Chmerkovskiy is a professional dancer, and the number 18 refers to the season that he won Dancing with the Stars. While it's possible Sloth could be someone else — like dancer Harry Shum Jr., another popular theory — all signs seem to point to Chmerkovskiy.

More like this
Every Celebrity From 'The Masked Singer' Season 8 Revealed Or Rumored So Far
By Gretchen Smail
'Big Brother' Is Already Looking For New Houseguests To Compete In Season 25
By Brad Witter
Here's The Full List Of Zach's Confirmed & Potential 'Bachelor' Contestants
By Kadin Burnett and Grace Wehniainen
Clayton & Susie Broke Up, Citing "A Significant Amount Of Pain" After 'The Bachelor'
By Jordyn Tilchen
Get Even More From Bustle — Sign Up For The Newsletter