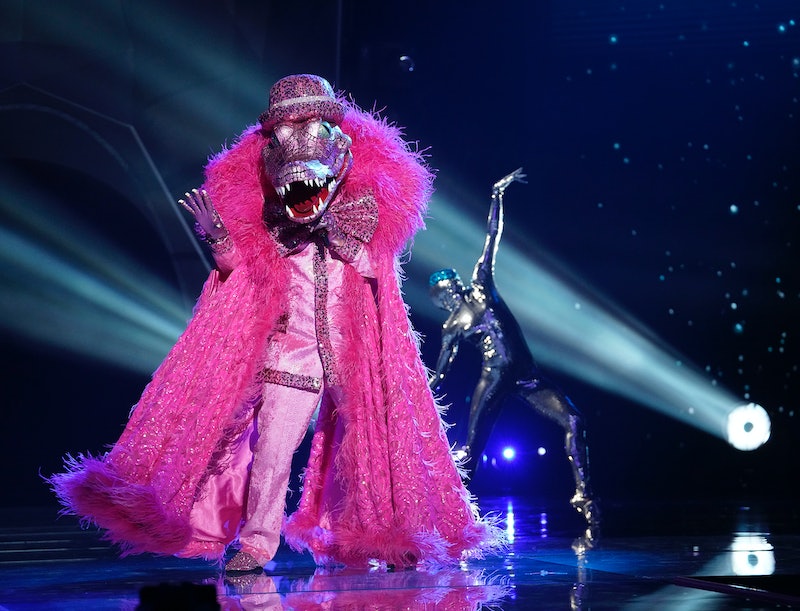 With only one episode remaining before the Masked Singer semifinals, fans are narrowing in on theories about the Crocodile. The pink-suited reptile sang Leona Lewis' "Bleeding Love" on the Nov. 18 episode, and the judges' guesses for him have been all over the map: Gucci Mane, Jordan Knight, Justin Guarini. But viewers are already pretty convinced the voice and clues line up perfectly with Nick Carter from The Backstreet Boys.

Viewers guessed Carter as early as the Sept. 30 episode, when Group B performed for the first time. "100% Nick Carter," wrote Reddit user elsieelephant. "As a BSB fan for over 23 years I would know that voice anywhere. From just his walk I had a feeling and then from the first note I was completely sure!"

The Oct. 14 clue package also gave away a pretty obvious hint that points to Carter. During the package, Crocodile told a detailed story about how his father wasn't very supportive of his career choices. Hoping to win his approval, the Crocodile gave his first $100 check that he earned as a child performer to his dad. As a fan pointed out on The Masked Singer Facebook page, Carter told that exact story in his autobiography Facing the Music.

The rest of the clues line up with Carter too. Like a crocodile, Carter is from Florida and is "the happiest in water." He "grew up in Hollywood" and auditioned for the Backstreet Boys when he was 12. The images of the Crocodile in Vegas are likely a reference to The Backstreet Boys' two year residency at the Planet Hollywood hotel.

The Oct. 14 clue package showed a skull and crossbones flag, a likely reference to Carter's favorite football team, the Tamba Bay Buccaneers. There was also an American flag, and his 2015 solo album was titled All American. The disco ball in the background probably signifies his time on Dancing with the Stars.

In the Nov. 18 episode, we got even more hints that point to Carter. His friend said in the clue package that they've "been all around the world together" and "once traveled to six continents in 100 hours." In 2000, the Backstreet Boys did a "Round the World in 100 Hours" tour that spanned Tokyo, Sydney, Cape Town, Rio, and New York. Their recent tour was also titled "DNA World Tour," and had a color scheme of red, black, and white like the yacht in the clue package. The remainder of the tour was obviously postponed this year, leaving Carter with plenty of free time to do The Masked Singer.

The package also mentioned that the Crocodile is an avid gamer. And on Aug. 19, Carter posted on Instagram that he beta-tested Fortnite before it was released, and hashtagged it with #gamerforlife. Finally, Season 1's Bee — who was revealed to be Gladys Knight — walked out with a "game changing clue" that said Crocodile was in "a huge cult classic movie." Nick Carter was one of the kids playing on the slip-n-slide in the background of a scene in Edward Scissorhands.

Nicole Scherzinger was nearly on the money about the connection between Gladys Knight and Jordan Knight. It's not Knight under the mask, but Carter and Knight did a joint album together titled Nick & Knight.

More like this
RHOP’s Robyn Dixon Explained Why Juan Paid For Another Woman's Hotel Room
By Brad Witter
Everything To Know About 'RHONY' Season 14
By Jake Viswanath, Alyssa Lapid and Brad Witter
Brianna Revealed Why 'The Bachelor' Premiere Was Tougher For Her Than You Saw On TV
By Brad Witter
Zach Swears He Didn’t Look Up Contestants Before The Bachelor Began Filming
By Brad Witter
Get Even More From Bustle — Sign Up For The Newsletter
From hair trends to relationship advice, our daily newsletter has everything you need to sound like a person who’s on TikTok, even if you aren’t.