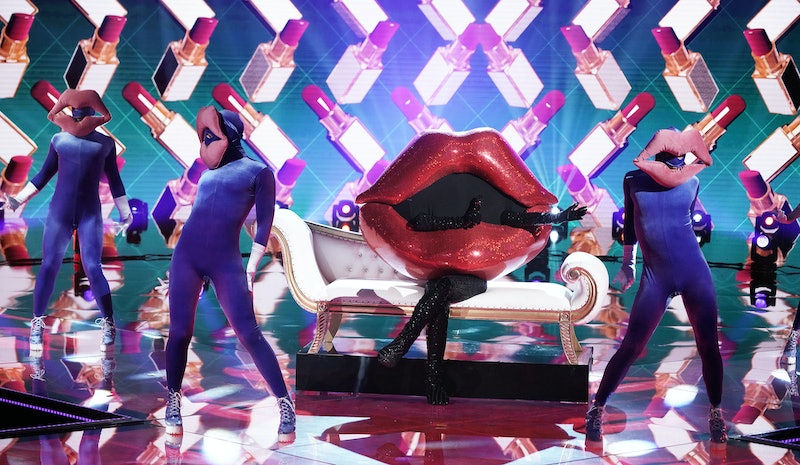 Group C hasn't yet graced the stage on the The Masked Singer Season 4, but that hasn't stopped fans from guessing the identities of the five remaining singers. There's one performer in particular who viewers are pretty sure they've already nailed down: the giant red Lips. Based on a very brief promo clip for Episode 5, fans have theorized that Lips is talk show host Wendy Williams.

In the Oct. 22 clip, Lips rolls in on a white chaise lounge for her performance. She's shown singing a high note before she stops to snort-laugh, ending it with a cheerful "Oops!" Later, she rubs her hands along host Nick Cannon's head, and Jenny McCarthy says, "I think it's a huge clue that she's getting a little frisky with Nick!"

It's these combined clues that have many viewers convinced Williams is inside the Lips costume. "The couch gave it away for me," one YouTube commentator wrote. Williams may not interview her guests on a chaise, but she does have a giant purple-pink couch. The big lips themselves also have the connotation of being a loud mouth, and like any other daytime host, Williams often dishes out celebrity rumors and opinionated takes on her show.

As for the giggle, The Wendy Williams Show has been on air for more than 12 years, during which time audiences have become pretty accustomed to hearing Williams laugh. "Of course it’s Wendy Williams," one YouTube user wrote in the comments. "If you go on YouTube and listen to her laughing on her show, that’s clearly her laughing."

The "frisky" comment from McCarthy also hints that Lips is already familiar with Cannon. He's been on Williams' show numerous times as a guest, and they seem to be close friends even when they occasionally quibble. In 2019, Cannon filled in for Williams as the show's host after she took an extended break to recover from a fractured shoulder. He tends to recognize when the Masked Singer contestants are his friends based on their body language, so it wouldn't be surprising if Lips was yet another one of his acquaintances.

Fans do have a few other guesses about Lips, including Lizzo, Tiffany Haddish, and Queen Latifah. But right now, all signs point back to Williams.