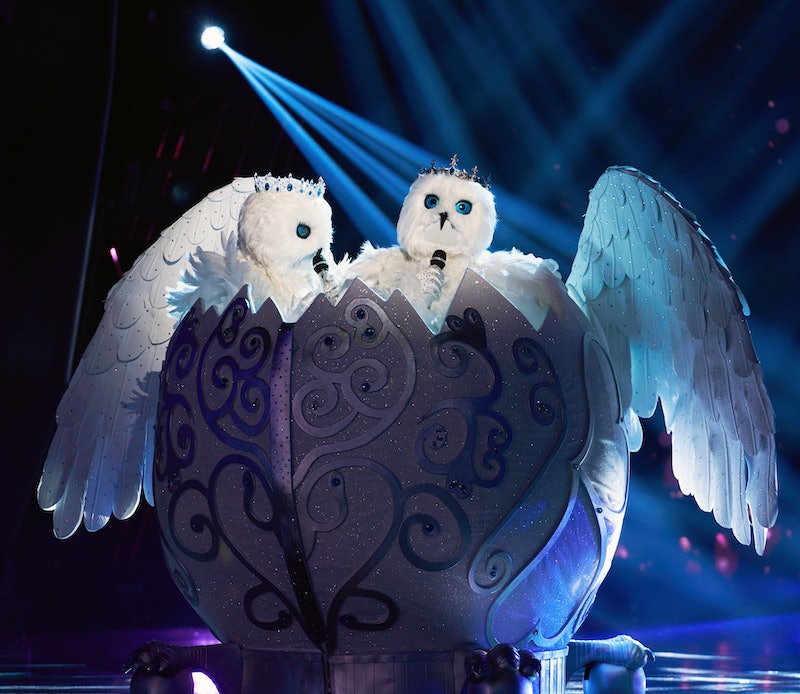 Masked Singer Season 4 may only be premiering tonight, but there are already several early theories about the Snow Owls. They mark the first celebrity pair to compete on the show, and both fans and panelists have hit the ground running with guesses about famous duos.

Hinting that "it takes two to make a dream come true" and it's "twice as nice" to perform with someone else, The Snow Owls said in their intro package that they're "on our hands and knees hoping for victory. After all, we are birds of prey." (There was an emphasis on the word "prey," likely indicating it's actually a play on the word "pray.") The first official clue was delivered against a farm-like backdrop. "You can try and figure out who we are, but as for who is more talented, it's a tie," one of the masked celebs said, adding that America's "heads will spin trying to figure us out."

Panelist Jenny McCarthy's immediately guessed The Brady Bunch's Maureen McCormick and Barry Williams or Donny and Marie Osmond. "After hearing them sing, I think it really could be Donny and Marie," she said in a promo for the premiere episode, despite Donny competing as a Peacock in Season 1.

Nicole Scherzinger agreed it could be the Osmond siblings "I was totally thinking the same thing," she added. "Because he's doing the pecking move just like Peacock."

But fans have some different ideas. Here are the five of the most popular guesses so far.

The Dancing with the Stars siblings have each released solo music, so they definitely have the vocal chops to compete on Masked Singer. Online commenters also pointed to the "prey/pray" reference as a nod to their strict Mormon upbringing, while some think that the male owl's speaking voice is a dead ringer for Derek's. Plus, the brother-sister pair have been sharing stages for most of their lives.

Sticking with the siblings theme, others guessed that the Snow Owls could be these child sitcom stars, who've never shied from discussing their devout faith.

The snow theme, sparkly attire, and inclusion of the words "spin" and "figure" led some viewers to guess Olympic ice dancer siblings Maia and Alex Shibutani.

Some eagle-eyed viewers spotted the names "Mr. Owl" and "Mrs. Owl" on a clothing rack in the intro video, leading many to believe The Snow Owls are spouses, not siblings. While country music power couples such as Faith Hill and Tim McGraw as well as Clint Black and Lisa Hartman Black were popular fan picks, Yearwood and Brooks' names were the most commonly shared on social media, given the country-themed backdrop and that they've been vocal about their Christian faith.

Some fans agreed that The Snow Owls are husband and wife, but believe it's actually Fixer Upper stars Joanna and Chip Gaines behind all those feathers. Many pointed to the farmhouse clue and prey/pray emphasis, while another suggested that the onscreen font looked similar to the logo for Rae Dunn, a brand the couple often used while decorating houses on their HGTV show.