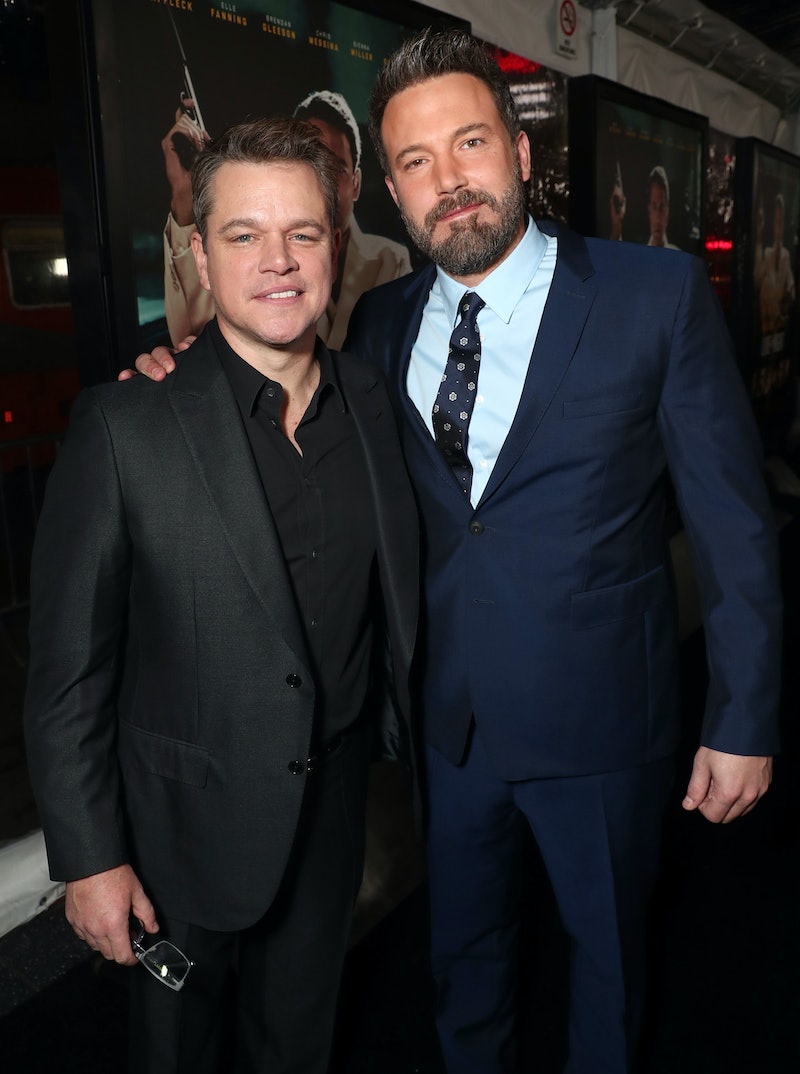 Now that Jennifer Lopez and Ben Affleck are making headlines like it’s the early 2000s all over again, Matt Damon finally weighed in on Bennifer 2.0. During a recent interview on Showtime’s Desus & Mero, co-host Desus Nice asked the Stillwater star if it’s “weird” having his boy in a “relationship that’s all over the news.” Damon’s response? “Well, yeah, it’s weird,” he said, adding, “I have to say, the press was particularly terrible to them, like, 18 years ago.”

Things seem to have changed since the couple officially split in early 2004, though. “What’s nice is that at least they’re being nice this time around,” Damon added of the media, before joking that his 40-year friendship with Affleck — or at least their favorite pro baseball team — is still among his pal’s top priorities. “They’re on vacation right now, but he still responded when I hit him up about the Red Sox yesterday.”

The vacation Damon referenced remains in full swing, as Affleck and Lopez were spotted kissing on Saturday, July 31 while docked in Naples, Italy. In fact, the pair, who reunited in April, has been sailing around Italy and the south of France on a multimillion-dollar yacht all week while celebrating Lopez’s 52nd birthday. It was also during this getaway that the exes, who called off their whirlwind engagement in 2003, made their rekindled relationship Instagram official with a sexy photo on July 24. (The post, which also contained several solo bikini shots of Lopez, racked up more than 8.6 million Instagram “likes” in less than a week.)

Damon’s openness about Affleck and Lopez’s second-chance reunion is new. In early May, he did his best to avoid the topic during a Today appearance. “There’s not enough liquor in the world for you to get me to say something about that,” he quipped to hosts Savannah Guthrie and Hoda Kotb. He did, however, acknowledge that “it’s a fascinating story” and that he loves them both.

Affleck previously discussed the media’s treatment of his relationship with J. Lo during a January interview on The Hollywood Reporter’s Awards Chatter podcast. “You know, there’s always a story of the month, and me dating Jennifer Lopez happened to be that tabloid story at the time when that business grew exponentially,” he recalled. “Still, to this day, [some] will go, ‘I see you out there in the paparazzi and the pictures!’ It’s like, ‘Yes, I left my house and took out the trash. It’s not like I’m trying to—’ And it’s still like, ‘You were taking a pap walk!’ As if, if you leave your house, you’re only doing so in the hope that you could be so lucky that you could end up as the sixth item in The Daily Mail. It’s absurd!”

Lopez, in particular, bore the brunt of the vitriol, he added. “People were so f*cking mean about her — sexist, racist,” Affleck said. “Ugly, vicious sh*t was written about her in ways that if you wrote it now you would literally be fired for saying those things you said. Now it’s like, she’s lionized and respected for the work she did, where she came from, what she accomplished — as well she f*cking should be!”

Indeed, times certainly seem to have changed for the couple, nearly two decades later, but Damon’s support is not one of them.

More like this
Selena Gomez Confirms She's Single Amid Drew Taggart Dating Rumors
By Martha Sorren, Jake Viswanath and Jack Irvin
Michael B. Jordan Tackled His "Public Breakup" With Lori Harvey On 'SNL'
By Brad Witter
Who Is Pete Davidson Dating? He & Chase Sui Wonders Got Caught Kissing
By Jake Viswanath
John Corbett's Wife Bo Derek Once Revealed If She's Team Aidan Or Team Big
By Alyssa Lapid
Get Even More From Bustle — Sign Up For The Newsletter
From hair trends to relationship advice, our daily newsletter has everything you need to sound like a person who’s on TikTok, even if you aren’t.