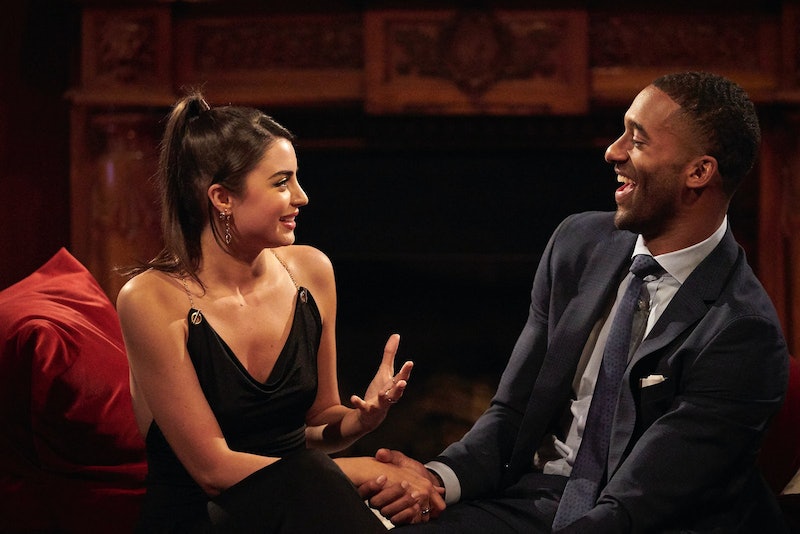 Matt James’ season of The Bachelor was one of the franchise’s most historic — and unfortunately, also one of the most controversial. During a conversation with guest host Emmanuel Acho on After the Final Rose, contestant Rachael Kirkconnell addressed the racism scandal that followed her throughout the season, speaking frankly about the photos of her attending an antebellum-themed party in 2018. “[When I look at those pictures] I see someone who was living in this ignorance without even thinking about who it would be hurting,” she said.

Rachael, who was in college at the time that the photos were taken, admitted that she had “no excuse” for her ignorance about the racist history of the antebellum South. “I’m not gonna sit here and say I didn’t know better because I could have easily asked myself those questions. I never took the time to make those connections, because if I would have taken the time I easily could’ve understood what was wrong with it,” she said, adding that antebellum parties being a “tradition” in the South didn’t “make it OK.’”

However, the normalization of such parties meant that Rachael didn’t even give the photos a second thought before applying to be on Matt’s season of The Bachelor. “Being completely honest, I didn’t think about it one time,” Rachael admitted. “Because at that point, it was just me taking some photos with my friends and I didn’t think anything of it. I didn’t think of the trauma that it would cause.”

According to Matt, Rachael was also unaware of the trauma that the photos would — and did — cause him as her partner. “The most disappointing thing was having to explain to you why what I saw was problematic and why I was so upset,” he revealed while speaking about the role the photos played in their breakup after the show. “When I’m dating someone, [I’m] on track to get married. And so when I questioned our relationship, it was in the context of you not fully understanding my Blackness and not understanding what it means to be a Black man in America, and what it would mean for our kids to see those things floating around the internet.”

Rachael apologized to Matt for hurting him, saying that she was still in love with him and “couldn’t imagine” marrying anyone else. “You were the only reason that I decided to do the show. That includes every single part of you, and that obviously includes you being a Black man,” she explained. “I’ve never experienced a love like this so I don’t see anyone else out there for me. At this point I just don’t see how I can have these same feelings for someone else.”

Matt admitted that though his feelings for her didn’t “go away overnight,” he couldn’t see them being in a relationship anymore. “I knew that I had to take a step back from you to put in that work that you needed to do. That’s something you gotta do on your own,” he explained. “The work and the reconciliation that needs to be done is work that I can’t do for you, and I know that you’re capable of doing it.”