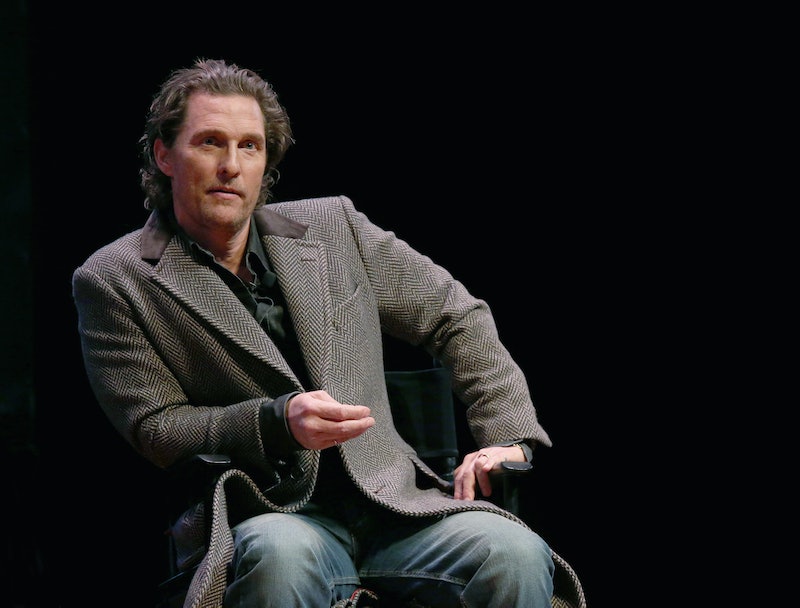 Unsure of who really asked for this, but Matthew McConaughey and Russell Brand decided to hash out the current state of America's democracy. During a recent episode of the Under The Skin podcast, the comedian wondered if the multi-hyphenate (actor, "pickle expert," and minister of culture) noticed a “condemnation and criticism of ordinary working people” by liberals in Hollywood. What followed angered and puzzled many who listened in and read the recaps.

The Interstellar actor went on to employ armadillo metaphors and discuss how "the left misses it for me just as far as being a marketeer" when it comes to encouraging people to vote and get involved in politics. He stated:

"When you say, ‘Hey, we want to get out the vote. We want people to go vote. We’re going to do a campaign to let people vote.’ I’m like, 100 percent. Yes, everyone ... And then they can't help themselves. At the very end of it they go, 'So, we don't let those criminal bastards get back in office.' You're like, 'No! Don't say the last part. You lost 50 percent of your audience.' And that's part of why so much of the nation of that 50 percent looks at us in Hollywood like, 'Oh yeah, another celebrity over there on the west coasters and the elite in the Northeast."

Ultimately, McConaughey's solution for the divided country is for Americans to make "an aggressive move" to be "aggressively centric," which is easy to say and do when you're a rich, cishet, white male, as several Twitter users and critics pointed out.

Author Luvvie Ajayi Jones detailed how McConaughey's privilege allows him to think in such a way. She tweeted, "Being 'aggressively centrist' as Matthew McConaughey claims to be is to be aggressively privileged. It is to pick no sides, therefore living in purgatory of action. A straight, rich white dude who is sheltered from many of the reasons why people on the "far left" are passionate."

Marlow Stern, an editor at The Daily Beast, pointed out how hypocritical it is that McConaughey profited off of Dallas Buyers Club, a film that discussed how AIDS impacted the LGBTQ+ community, and "is now railing against the "illiberal left."

Twitter user @JasonIsCreating noted how McConaughey's statement was condescending in a way that citizens holding those in power accountable is not.

More like this
Everything To Know About Taylor Swift’s 10th Studio Album, 'Midnights'
By Grace Wehniainen and Jake Viswanath
Devon Diep From 'Bling Empire' Wrote A Song About Her “Second Chance At Love”
By Grace Wehniainen
Shonda Rhimes' Net Worth Makes Her One Of The Wealthiest People In TV History
By Hugh McIntyre
Sarah Jessica Parker “Doesn't Remember” What 'Hocus Pocus' Is About In Resurfaced Clip
By Emily Mae Czachor and Radhika Menon
Get Even More From Bustle — Sign Up For The Newsletter