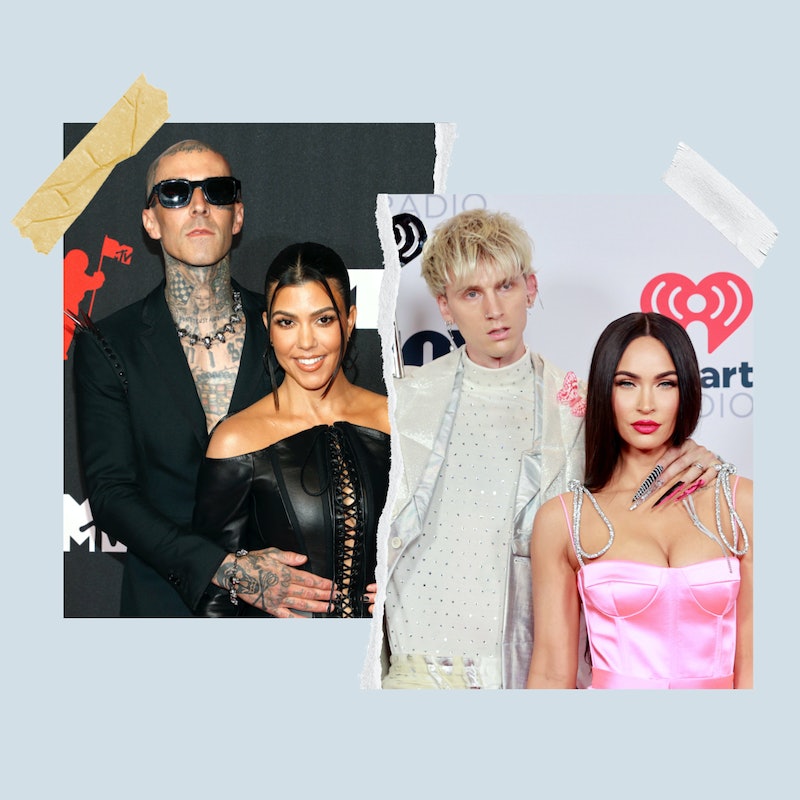 Roughly three months after Travis Barker’s romantic beachfront proposal to Kourtney Kardashian, they are now celebrating the engagement of their close pals Megan Fox and Machine Gun Kelly. The “Bad Things” musician proposed to the Jennifer’s Body actor on Jan. 11 and announced the exciting news on Instagram the next day. “Yes, in this life and every life,” MGK captioned his post. “Beneath the same branches we fell in love under, I brought her back to ask her to marry me.”

Fox, 35, posted about their intimate engagement on her Instagram as well. “In July of 2020 we sat under this banyan tree,” she wrote alongside a video of the proposal. “We asked for magic. We were oblivious to the pain we would face together in such a short, frenetic period of time. Unaware of the work and sacrifices the relationship would require from us but intoxicated off of the love. And the karma.”

“Somehow a year and a half later, having walked through hell together, and having laughed more than I ever imagined possible, he asked me to marry him,” the Transformers star continued. “And just as in every lifetime before this one, and as in every lifetime that will follow it, I said yes.…and then we drank each other’s blood.” Blood has been a recurring theme in their relationship. Last summer, Fox starred in MGK’s “Bloody Valentine” video. In May 2021, he revealed that he wears Fox’s blood in a pendant around his neck.

Although their affinity for blood may be unconventional, the newly engaged couple has received a lot of love and support from friends and fans alike. “F*CK YESSSSS 🖤,” Barker wrote in response to the news. Kardashian congratulated the pair by dropping five red heart emojis in the comments. It wasn’t long ago that Barker and Kardashian were celebrating their own engagement. The Blink-182 drummer reportedly popped the question in October at the Rosewood Miramar Hotel in Montecito, California. Kardashian revealed the news on Instagram with a photo of the proposal. “forever @travisbarker,” she wrote.

For fans who’ve been paying attention, neither of these proposals were much of a surprise. In September, both couples appeared to be in it for the long haul when Fox and Kardashian introduced their respective boyfriends at the MTV Video Music Awards. “Give it up for our future baby daddies,” they told the crowd ahead of a live performance of “Papercuts.” Then, one month after Kardashian and Barker’s engagement, a source told Entertainment Tonight that MGK was “planning to propose.”

Now that MGK finally got down on one knee, the congratulatory messages haven’t stopped pouring. “So happy for u guys!!!! 💍😍❤️,” Kim Kardashian commented on Fox’s proposal video. Drew Barrymore echoed that sentiment, writing, “CONGRATULATIONS TO YOU BOTH!!!!!!!” However, it was Perez Hilton who said what we’re all thinking: “Did you REALLY drink each other’s blood?”

More like this
Keke Palmer Shares The Sex Of Her & Darius Jackson's Baby
By Jake Viswanath
Hilary Duff's Husband Matthew Koma Has Her Name Tattooed On His Butt
By Jake Viswanath and Stephanie Downs
Who Is Allison Williams Dating After Her Divorce? She’s Engaged With A Child
By Jake Viswanath
Kylie Jenner Clarified How To Pronounce Her Son's New Name
By Jake Viswanath
Get Even More From Bustle — Sign Up For The Newsletter
From hair trends to relationship advice, our daily newsletter has everything you need to sound like a person who’s on TikTok, even if you aren’t.