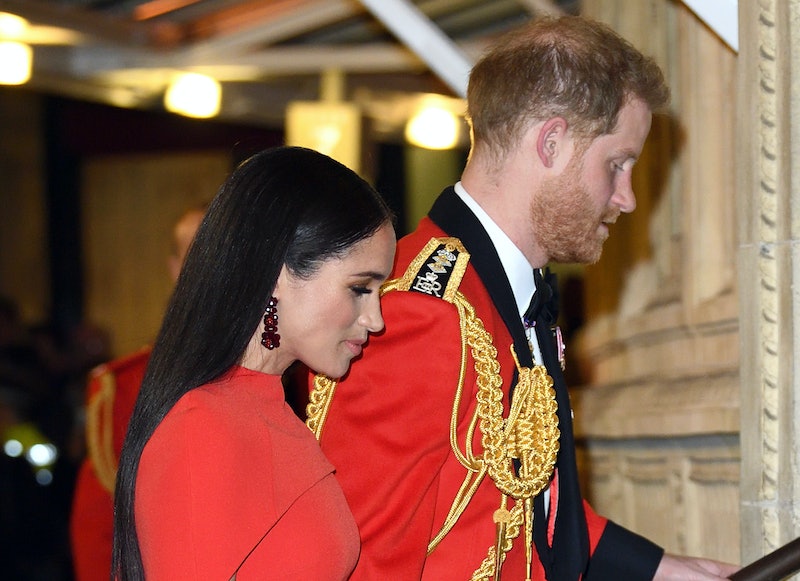 This week it was revealed that Meghan Markle and Prince Harry very sadly suffered a miscarriage during July of this year. Meghan chose to write about the couple's experience in a piece for The New York Times, where she explained the immeasurable grief that came with their loss, as well as encouraging readers to keep checking in on each other's wellbeing. While the public first learned of the pair's devastating news via the piece, it has now been revealed that Meghan and Harry told the Royal Family about the miscarriage beforehand in private discussions.

According to Entertainment Tonight, the couple told their family in the UK before sharing their story publicly. "Prior to the story being published, Prince Harry did discuss Meghan's miscarriage with his family," the publication wrote. "The Duke and Duchess also knew at the time of their loss that their story was something they wanted to eventually share publicly. It seems now was the right time."

Spokesperson for both Prince Charles and Buckingham Palace have declined to comment on the news, noting that it was a deeply personal matter. However according to People, a Palace source has said that "there is a lot of sadness around the family."

Meghan's story was first published on Wednesday, Nov. 25 via The New York Times. The piece, entitled The Losses We Share, described the moment Meghan felt something was wrong:

"It was a July morning that began as ordinarily as any other day: Make breakfast. Feed the dogs. Take vitamins. Find that missing sock. Pick up the rogue crayon that rolled under the table. Throw my hair in a ponytail before getting my son from his crib.

After changing his diaper, I felt a sharp cramp. I dropped to the floor with him in my arms, humming a lullaby to keep us both calm, the cheerful tune a stark contrast to my sense that something was not right.

I knew, as I clutched my firstborn child, that I was losing my second."

The piece has been widely shared across social media, and a number of celebrities have come forward to praise Meghan for her bravery in telling her story.